SB NEWS-PRESS: THE INVESTIGATOR: BOARD OF SUPERVISORS NEEDS SUPERVISION 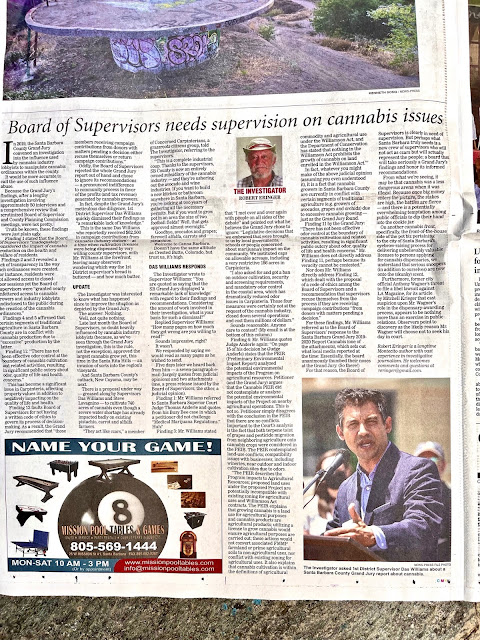 In 2019 the Santa Barbara County Grand Jury convened an investigation into the influence used by cannabis industry lobbyists to manipulate cannabis ordinances within the county.

It would be more accurate to call the use of such influence abuse.

Because the Grand Jury’s findings, after a lengthy investigation involving approximately 50 interviews and a comprehensive review that scrutinized Board of Supervisor and County Planning Commission meetings, were not pretty.

Truth be known, these findings were just plain ugly.

Finding 1 stated that the Board of Supervisors “inadequately” considered the impact of cannabis production on the health and welfare of residents.

Findings 2 and 3 revealed a lack of transparency in the way such ordinances were created. For instance, residents were not allowed access to closed-door sessions yet the Board of Supervisors were “granted nearly unfettered access to cannabis growers and industry lobbyists undisclosed to the public during the creation of the cannabis ordinances.”

Findings 4 and 5 affirmed that certain segments of traditional agriculture in SB County are in conflict with cannabis production due to “excessive” production by the latter.

Finding 11: “There has not been effective odor control at the boundary of cannabis cultivation and related activities, resulting in significant public outcry about odor, quality of life and health concerns.”

This has become a significant issue in Carpinteria, affecting property values in addition to negatively impacting on the quality of life and health.

Finding 12 faults Board of Supervisors for not having a written code of ethics to govern its process of decision-making. As a result, the Grand Jury recommended that “those members receiving campaign contributions from donors with matters pending a decision either recuse themselves or return campaign contributions.”

Oddly, the Board of Supervisors rejected the whole Grand Jury report out of hand and chose to ignore its recommendations—a pronounced indifference to community process in favor of the profits (and tax revenue) generated by cannabis growers.

In fact, despite the Grand Jury’s meticulous due diligence, First District Supervisor Das Williams quickly dismissed their findings as “a remarkable lack of knowledge.”

This, the same Das Williams who reportedly received $62,500 in campaign contributions from cannabis industry donors—at a time when cultivation licenses were being dispensed by very willing Supervisors, with Mr. Williams at the forefront, leaving many observers wondering which way the First District Supervisor’s bread is buttered—and how much butter.

The Investigator was interested to know what has happened since to improve the situation as depicted by the Grand Jury.

Well, not quite nothing.

Late last month the Board of Supervisors, no doubt heavily influenced by cannabis industry lobbyists (because, as we’ve seen through the Grand Jury investigation, this is the rule, not the exception), approved the largest cannabis grow yet, this time in the Santa Rita Hills—an invasion of sorts into the region’s vineyards.

And Santa Barbara County’s outback, New Cuyama, may be next. There is a proposal underway—greased along by Supervisors Das Williams and Steve Lavagnino—to cultivate 740 acres of cannabis even though a severe water shortage has already impacted badly on existing pistachio, carrot and alfalfa farmers.

“They act like czars,” a member of Concerned Carpinterians, a grass roots citizens group, told The Investigator, referring to the Supervisors. “This is a complete industrial coup. Thanks to the Supervisors, SB County is now an entirely owned subsidiary of the cannabis industry—and they’re ushering out the avocado and wine industries. If you want to build a new kitchen or bathroom anywhere in Santa Barbara, you’re looking at two years of gathering all the necessary permits. But if you want to grow pot in an area the size of two football fields? Well, that gets approved almost overnight.”

Welcome to Canna Barbara. Doesn’t have the same altitude as Crested Butte, Colorado, but, trust us, it’s high.

The Investigator wrote to Supervisor Williams:  You are quoted as saying that the SB Grand Jury displayed “a remarkable lack of knowledge” with regard to their findings and recommendations. Considering the amount of work involved in their investigation, what is your basis for such a dismissal?

Replied Supervisor Williams: How many pages on how much they got wrong are you willing to read?

We responded by saying we would read as many pages as he wished to send.

Five days later we heard back from him—a 7 paragraph e-mail (largely quotes from judicial opinions) and 2 attachments (one, a Press release issued by the Board; the other, a judicial opinion).

Finding 1: Mr. Williams refers to Santa Barbara Superior Court Judge Thomas Anderle and quotes from his Busy Bee Case in which a Petitioner did not challenge “Medical Marijuana Regulations.” Huh?

Finding 3: Mr. Williams states that “I met over and over again with people on all sides of the debate” and points out what he believes the Grand Jury chose to ignore: “Legislative decisions that we embraced that were brought to us by local governments, schools, or people concerned about marijuana’s impact on the community. We instituted caps on allowable acreage, including a very restrictive 186 acres in Carpinteria.  I also asked for and got a ban on outdoor cultivation, security and screening requirements, and mandatory odor control in the coastal area, which has dramatically reduced odor issues in Carpinteria.  Those four measures were certainly not at the request of the cannabis industry, closed down several operations, and cost them millions of dollars.”  Sounds reasonable. Anyone care to contest? (My e-mail at the bottom of this column.)

Finding 4: Mr. Williams quotes Judge Anderle again: “On page 15 of his decision he [Judge Anderle] states that the ‘PEIR analyzed the potential environmental impacts of the Program on agricultural resources. Petitioner [and the Grand Jury] argues that the Cannabis PEIR did not contemplate or analyze the potential environmental impacts of the Project on nearby agricultural operations. This is not so. Petitioner simply disagrees with the conclusion in the PEIR that there are no conflicts. Important to the Court’s analysis is the fact that both terpene taint of grapes and pesticide migration from neighboring agriculture onto cannabis crops were considered in the PEIR. The PEIR contemplated land use conflicts; compatibility issues with businesses; including wineries, near outdoor and indoor cultivation sites due to odors. The PEIR describes the Program impacts to Agricultural Resources; proposed land uses under the proposed Project are potentially incompatible with existing zoning for agricultural uses and Williamson Act contracts. The PEIR explains that growing cannabis is a land use for agricultural purposes and cannabis products are agricultural products; utilizing a license to grow cannabis would ensure agricultural purposes are carried out; these actions would not convert associated FMMP farmland or prime agricultural soils to non-agricultural uses, nor conflict with existing zoning for agricultural uses. It also explains that cannabis cultivation is within the definitions of agricultural commodity and agricultural use under the Williamson Act, and the Department of Conservation has stated that nothing in the Williamson Act prohibits the growth of cannabis on land enrolled in the Williamson Act.’”

In fact, whatever you might make of the above judicial opinion (assuming you even understood it), it is a fact that cannabis growers in Santa Barbara County are currently in conflict with certain segments of traditional agriculture (e.g. growers of avocados, grapes and orchids) due to excessive cannabis growing—just as the Grand Jury found.

Finding 11 by the Grand Jury: “There has not been effective odor control at the boundary of cannabis cultivation and related activities, resulting in significant public outcry about odor, quality of life and health concerns.” Mr. Williams does not directly address Finding 11, perhaps because its veracity cannot be contested.

Nor does Mr. Williams directly address Finding 12, which dealt with the proposal of a code of ethics among the Board of Supervisors and a recommendation that Supervisors recuse themselves from the process if they are receiving campaign contributions “from donors with matters pending a decision.” Dey want da money!  (And we’re not even in Chicago.)

For these Findings, Mr. Williams referred us to the SB Board of Supervisors Response to the SB Grand Jury 2019-2020 Report Cannabis (one of the attachments), which sets out what local media reported at the time:  that, essentially, the Board unanimously thumbed-their-nose at the Grand Jury. (So there!)

For that reason, the Board of Supervisors is clearly in need of supervision. But perhaps what Santa Barbara truly needs is a new crew of Supervisors who will not act as czars but will actually represent the people; a Board that will take seriously a Grand Jury’s findings and honor its informed recommendations.

From what we’re seeing, it may be that cannabis was a less dangerous arena when it was illegal. Because once big money enters the picture, the stakes are high, the battles are fierce—and there is a potentially overwhelming temptation among public officials to dip their hand into the cookie jar.

On another cannabis front, specifically, the front-of-the-house side of the pot biz pertaining to the City of Santa Barbara’s eyebrow-raising process for delivering unbelievably-valuable licenses to persons applying for cannabis dispensaries, we understand that serious snoopers (in addition to ourselves) are now onto the (skunky) scent.

Furthermore, former city official Anthony Wagner’s threat to file a libel lawsuit against LA Magazine, for its article by Mitchell Kriegman that cast suspicion upon Mr. Wagner’s role in the dispensary-awarding process, appears to be nothing more than an exercise in public relations. Observers point to Discovery as the likely reason Mr. Wagner will choose not to seek his day in court.

Posted by Robert Eringer at 7:37 AM