INTO ART 12: RETURN TO PINKIE

The hospital kept me for three days and nights, until I was no longer infectious and had responded favorably to antibiotics.

As I had done twice before from the Jersey Shore, I made my way to Newark Airport.  Only this time I did not return home; instead, I purchased a one-way ticket to Los Angeles, from which I launched by taxi directly to Pasadena, to the Huntington Library, to the exhibition room, to Pinkie.

She stood looking at me, as before.  But I saw no recognition in Pinkie’s eyes—only her direct stare with half-pout.

I closed my eyes and tried again.

And then, unshaven and disheveled as I was, weakened by an illness that had ravaged my soul, I just stood staring, waiting to be hypnotized, wishing myself to reappear on Richmond Hill.

At some point, a security guard tapped me on the shoulder and interrupted my concentration.  “Are you okay?”

Maybe I was trying too hard?
I strolled the length of the hall to see The Blue Boy.

Of course, that’s how it began.

I studied his silken costume for a while and then turned to gaze at Pinkie from afar.  Slowly, I retraced my steps toward her, not taking my eyes from hers.

I stopped in front of her, the exact spot as a week earlier.  I lost myself in the artist’s brushstrokes.  I practically willed myself into the painting… until another tap on my shoulder.

A suited male accompanying the security guard said, “May I help you with something?”

“Yes, by leaving me alone,” I mumbled.  “I’m just enjoying this painting.”

“You’ve been standing here for almost two hours,” he said.  “We’re getting ready to close.”

“What time do you open tomorrow?”

The gift shop was closing as I passed, but they unlocked the door so I could purchase a 20 x 27 inch framed art print of Pinkie for $104.99.

Someone at the front gate called me a taxi and I checked into the closest hotel I could find, The Langham.  Inside a cottage suite, I took down a picture from the wall and replaced it with Pinkie.

I continued to stare at it through the evening. And when it got late, I hung it over the bed, positioning myself with pillows the wrong way round so I could continue to see her as I lay flat.

When I awakened, just past six in the morning, there she was, Pinkie… flat and one dimensional on the wall.

I counted the hours, then the minutes, and finally the seconds until noon, when I paid admission and rushed to Pinkie.  I stood before her, waiting patiently to be let in.

By four-thirty, nothing had happened, and instead of Pinkie I had only my tormented mind and broken heart.

It sounds like cliché, but I had to be dragged away screaming.  They ordered me never to return.


Not knowing what else to do, where else to go, I parked myself in Dr. Stendahl’s waiting room. 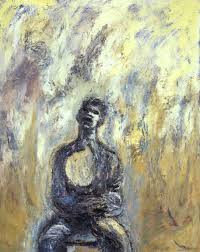 Not knowing what else to do, where else to go, I parked myself in Dr. Stendahl’s waiting room.
When he came out for another patient, he did a double take, allowing his specs to dip down his nose.  “Do we have an appointment today?”
I shook my head.  “I really need to see you, doc.”
An expression of irritation briefly crossed his face as he consulted his wristwatch.  “I can see you in an hour.  But only for a few minutes.”
Dr. Stendahl regarded me thoughtfully from across his coffee table.  "You've lost weight," he said.


Dr. Stendahl regarded me thoughtfully from across his coffee table.  "You've lost weight," he said.
I nodded.  “I’ve been in the hospital with whooping cough.”

“The doctor there wanted to know how I got it and I didn’t know what to say, so I thought maybe you’d have the answer.”

Dr. Stendahl shrugged.  “You think I have an answer to that?  Okay:  whooping cough is highly contagious.  Obviously you caught it from someone.”

“Exactly,” I said.  “The people at the hospital needed to know from who.”

“Did you tell them?”

“Doc, here’s what I need to know, for me, not the hospital:  How could I catch whooping cough from someone inside a painting if it’s just a hallucination?”

He looked at me sternly.  “Did you go off the meds I prescribed?”

“Yes,” I said, “but only because I was blacked out or unconscious or delirious for a week—and I wanted to see you again before recommencing.  I was still taking Zyprexa and Abilify when I had my last hallucination, as you would call it, and someone in that hallucination gave me whooping cough, and I just wonder, doc, if you can explain that for me?”

“You think you caught whooping cough from a painting?”

Dr. Stendahl got up and rustled around his desk, put his hand on something.  “I remember now.  I had a call from Monmouth Memorial Hospital.  The doctor treating you said you kept asking about a certain Pinkie and he wondered who she was.   I think he wanted to warn this person to visit a doctor.  So I Googled Pinkie—and this is what I found.”  He held up a color image of Pinkie.  “Is this where you think you contracted whooping cough?”

“Not in that painting,” I said quietly.

“From Pinkie, on her deathbed.”

Dr. Stendahl turned to look at the picture.  “But this is not a painting of Pinkie on her deathbed.”

“It was tactile!” I erupted.  “I could feel her, the touch of her hand on mine!”

He shook his head.  “That doesn’t make it real.  It only makes the psychosis behind your hallucinating more serious.”

“I thought I wasn’t supposed to hallucinate anymore on meds?”

“It’s not a perfect science,” said Dr. Stendahl.  “It’s hit or miss, and try again, until one finds the right cocktail that balances the brain.  Everyone’s brain is different. Was this the only hallucination you’ve had since we met?”

“Why are you so distraught?” he asked.

My eyes welled and I uttered a half-laugh, half-cry.  “I’m in love with Pinkie.  I can’t get her out of my mind!”

The doctor studied me.  “Perhaps you are confusing love with obsession.”

“What I’m doing is blaming myself for her death because I might have been able to save her.”

Dr. Stendahl folded his arms, a bemused expression.  “And how do you suppose you might have done that?”

“Pinkie missed Jamaica.  She didn’t like England.  She never would have died so young if she hadn’t left Jamaica.”

"Does it occur to you that you're talking about something that happened over two centuries ago?"

I did not reply.

“Are you traveling in time now?” he asked, somewhat sarcastically.

It made me feel indignant. “How could I catch whooping cough if I wasn’t really there?”

Dr. Stendahl shrugged.  “Maybe riding a Greyhound bus all night in close quarters with someone with whooping cough?”

I looked down, feeling my spirit broken as well as my heart, and I shook my head.  “What am I supposed to do?”

I looked up.  “But I need to talk about what happened.  How can I fall in love with an eleven year-old?”

“After I Googled Pinkie I read a about her—about the painting,” said Dr. Stendahl.  “Some say that, to the artist, Pinkie represented childhood.  Maybe that’s what is going on here:  you are resorting to the same kind of escapism that little boys do in childhood when they daydream.”

“I honestly don’t know what’s going on here, doc, but I used to daydream as a boy—and it was nothing like I’m experiencing now.  What can I do about it?”

“I’m going to guess, the way you’re talking, that you’ve already been back to see the painting of Pinkie.”

I shook my head.  “Nothing.”  A tear dripped down my cheek.

“You’d rather live in fantasyland than in reality?”

I shrugged.  “Whatever it takes to see her again.”

“But you know she’s not real.”

“And what happens if you don’t, uh, hallucinate Pinkie again?”

I wrung my hands in despair of such a notion.  “I can’t even imagine.”

“Do you feel suicidal?”

I did not answer.  In truth, I felt that my life would not be worth living if I could not see Pinkie again.

“I see,” said Dr. Stendahl, looking grim.  “There’s only so much I can do with medication and seeing you once a week.  Based on how distraught you are, I think you should check yourself into a facility.”

“You mean a mental hospital?” I shot back.

“It’s not as bad as it seems.  No one is going to commit you.  You go in voluntarily.  These days, specialized short-term care can do wonders for patients with symptoms like yours.  In just a few weeks they’ll have you feeling good, and back to living a normal life again.”

“That’s the point.  You need to get on without her.  If you prefer, you could receive intensive counseling as an outpatient.”

Dr. Stendahl checked his wristwatch.  “I’m going to give you two things:  One, a new prescription for meds.  We’re going to increase the dosage, which we probably should have done before your most recent hallucination, but you didn’t come back to see me.  Two, I’m going to write down an 800 telephone number for the National Suicide Prevention Lifeline.  If you are feeling desperate and suicidal, call them.  It truly helps to talk with someone. They are specially trained to listen and to talk you down from thoughts of suicide, which are always temporary.”

Posted by Robert Eringer at 8:19 AM