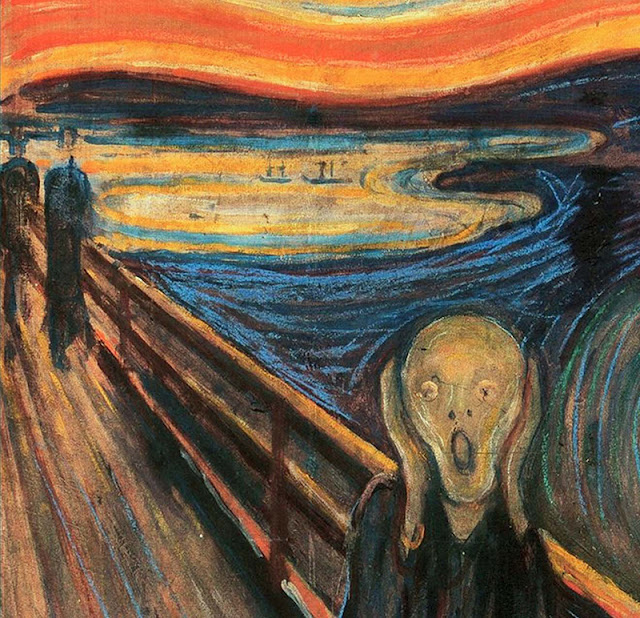 On a piece of blank paper I had scribbled Pinkie so many times—handwritten, printed large, and small—that there was almost no white space left on the page.

I turned it over to start again, but instead wrote my feelings:  Despair, melancholy, anxiety.

This prompted a new thought:  I entered all three words into Google and searched images.

There, before my eyes on the computer screen, I saw the embodiment of how I felt:

The Scream by Edvard Munch:  A lost soul holding his head in his hands beneath a blood red sky, delivering a primal scream.

I Googled The Scream and found a better, larger image of the iconic painting.  It filled my screen in such detail I could discern it had been painted with pastels.

The longer I studied it, the more caught up I became in its swirls, until my eyes got stuck in the center of the painting, above the screaming figure, just below the sky, a puddle of sunlight surrounded by darkness.  My broken heart pounded.

What is this poor fellow screaming about?

I blinked.  And when I opened my eyes I stood before the painting’s ghostly figure, which looked like something akin to an alien from outer space.  His arms now rested at his sides and his mouth had closed.

The tall dark figures on the left of the painting slowly trudged off in the other direction.

“I thought maybe you were screaming about them?”  I said.

“Those men in black, coming for you.”

The figure shook his head.  “No.  I was actually walking with them.  But I could not go on.”

“I’m tired.  And I had this strange feeling that nature was screaming at me.  So I screamed back.”

“They call me Bizarro,” he replied.

“Because of my paintings.  I do not paint women knitting or men reading.  I paint real people who feel, suffer and love.  Also, my paintings look unfinished, but this is deliberate.”

“You are the artist?”

He nodded.  “You can hear the screams, no?”  He pointed at the hillside to the right of a body of water.

I strained my ear.  “Yes,” I said, quite amazed.  I heard grotesque screams, barely audible.  “What are they?”

“Two separate places,” he said.  “One, a slaughterhouse.  This is where they send moose and reindeer and sheep to be butchered for food.  The animals smell death, and they scream before it is their turn.   Two, Gaustad.  A hospital for insane women.”  He paused.  “My sister, Laura, was there.”  He lowered his voice to a whisper.  “Schizophrenia.  People think I am mad too.  And perhaps I am.  For certain, I am almost mad.  But I feel better now, after screaming.  The walls are down, the floors are up and only the chimney remains.”

“You might try it.  But first you must be stretched to the limit, a breaking point.  And then.  Shrik!  He did it again:  A loud piercing cry that vibrated my bones to the marrow.  “You feel?” he asked.

“I paint the secret life of the soul—and the suffering of sickness and death and poverty.  And sometimes I just need to scream—to let it all out.” 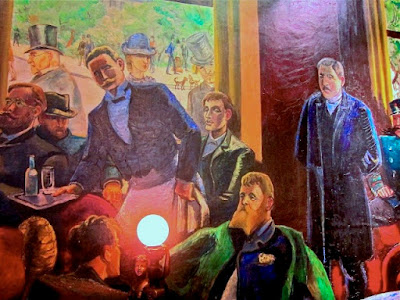 In a blur, we suddenly appeared at a corner table in a large bar.
“Where are we now?” I asked.
“The Grand Hotel, Kristiana.  This is where I used to drink with my bohemian buddies, the anarchists and nihilists.  This was our headquarters.”  He looked up at a hovering waiter.  “Whiskey and soda for two,” he said, waving him away, reverting to me.  “My ideas as an artist were developed right here, with my friend Hans Jaeger, borne out of the great Russian thinkers.  This is where we wrote our Nine Commandments, on a paper napkin.  The first was Thou shalt write thy life.  This is what I do.  I write my life in paintings—the Frieze of Life, I call it.  The ninth commandment was Thou shalt kill thyself.”
Bizarro turned introspective.  “Hans drove his closest disciple, Johan Fleischer, to his suicide—and wanted me to replace him.  He’d sit where you’re sitting now—this very table—raise his whiskey and soda and say, ‘Metaphysics or suicide.’  We used to have drinks before breakfast just to sober up.  Later we drank to get back into a stupor.  I’d sit here barely able to think, trying to get rid of a worm gnawing at my heart, and I thought I was going mad.  Screaming saved me.  So…” Bizarro studied me.  “Suicide or scream?”
“Right here?” I looked around the large café-bar, at all the people drinking around us.
Bizarro nodded.  “Here—and now.”
From my midsection I felt it coming on.  I opened my mouth wide to let it out—a high-pitched howl, a terrible shriek that continued until my lungs were completely empty.  I gasped to fill them with air, and opened my eyes.
A bar full of patrons stood watching me in wonderment.
Behind the bar, a person I recognized shook his head.  “Do I need to call an ambulance?” asked Eddie the bartender.  “Like last time?”
I looked around, mortified.Wonder Bar.  Asbury Park, New Jersey.

“Uh, no,” I mumbled, embarrassed.  “Sorry.”
The young patrons returned to their conversations, all titters, giggles and whispers.
The bartender leaned in.  “Are you all right, boss?”
I nodded.  “Actually, I am.”  I considered this.  “You should try it sometime.”
“Try what?”
“The scream.”
“Did you ever find Pinkie?”
“What do you know about Pinkie?” I demanded.
“Your last visit, boss, before the ambulance arrived, you were really upset and crying about Pinkie.  You kept saying over and over that you loved her and lost her.”“Just a painting.”
“Next thing, we all had to get vaccinated for whooping cough.”
I looked up and down the bar.  “Why do you suppose I keep coming back here?”
Eddie shrugged.  “Asbury Park is making a comeback:  This place, and Tim McCloone’s Supper Club.  I was there last night…”
Last night, supper club…
Eddie the bartender’s words juxtaposed in my brain, synapsing by neurotransmitter into a new phrase…

That's the painting I had to penetrate.

Posted by Robert Eringer at 8:11 AM