INTO ART 14: THE LAST SUPPER 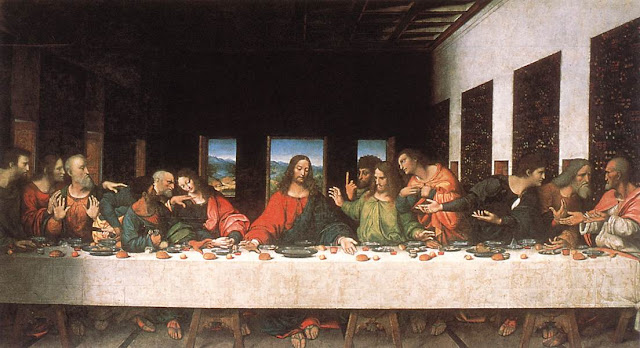 I packed my bags and flew to Milan, Italy and beelined to the monastery of Santa Maria delle Grazie.

This was where Leonardo da Vinci, in the 1490s, painted his famed mural on a dining hall wall.

I entered the church and lit three candles—one for Fou-rou, one for Bizarro and the third for Pinkie.  (I’m not religious but I believe in respecting the traditions of others when inside their homes.)

And then I approached the twenty-nine foot wide mural.

I ‘d learned from my past encounters with paintings to focus on swirls or texture or eyes.  And so it was with The Last Supper.

Within a couple of minutes I found a rhythm based on The Trinity:

At the table, disciples are bunched in groups of three. And three windows behind Jesus of Nazareth.

Jesus, himself, is shaped like a triangle in this mural, draped in blue and orange, Van Gogh’s favorite colors, looking down at the open palm of His outstretched hand.

In DaVinci’s depiction, Jesus has just announced that one of the apostles would betray him. He looks sad and resigned to his fate.

I felt my heart accelerate into a rapid beat as giddiness consumed me.

And suddenly I was there, facing Jesus.

He looked up, startled.  “Do you come in need of food?” He asked.

I stood speechless, not knowing what to say to one of the world’s most famous personages of all time.  I shook my head.

“Do you carry a message?”

I shook my head.

“What is the reason for your presence among us?”

“Yes, why?  Why did God the Almighty create a world so full of pain and suffering?  A world where great artists—the angels of universe—are scorned and humiliated and live in poverty?  A world in which a young innocent girl can die alone from sickness?”

The apostles hushed to silence.
Jesus finally spoke.  “You’re asking me?  I’m about to be betrayed and as a consequence will suffer the most excruciating death.”
“And why is that so?”“I must die for the sins of humankind.”
“But why?”
“So that we can be forgiven and go with the Lord.”“Forgiven for what?  Pinkie never sinned.”
“We all sin.”
“I don't think Pinkie did. But assuming you're right. Why did the Lord create a world of sinners?”
“He wanted friends,” replied Jesus.
“Well, I didn’t ask to be born.”
“No one does.”
“Exactly,” I said.  “No one asks to be born.  Yet here we are.  We get pushed out into the world and, if we’re lucky—and I mean the luckiest of the lucky—we’re born into a good family with shelter and food on the table.  Yet as soon as we’re a few years old, we’re forced into school where we have to listen to boring teachers yak their heads off all day about boring stuff we don’t really need to know and will never be of any use to us.  And then…”
“Pardon me, if you will,” said Jesus.  “But this is supposed to be my last supper.  There isn’t exactly a lot to eat here.  And someone…” Jesus cast an irritated glance to his right… “someone forgot the wine.”
“And then,” I continued, “when you’re eighteen, you’re pushed out the door and told you have to toil eight hours a day doing hard labor or mindless stuff, ordered around by lunkheads, just so you can afford someplace to sleep and food to eat.  I mean, who asked for this?  And most people feast on the flesh of animals.  Living beings!  With real feelings!  And real nerve endings!  And these living creatures—God’s creatures—are bred in horrible conditions and slaughtered and sold to everyone as food.  And if that isn’t enough, human history is a wreckage of brutality and murder on a widespread scale.  Constant wars!  Constant suffering!  Humankind is an army of germs killing the very organism on which they live.  They consume without replacing and they scatter their poisonous waste, suffocating the earth—just like cancer does to a healthy cell.
“And if you’re lucky, you grow old.  But what good is that?  You lose your ability to do things, to think properly.  Your loved ones cast you out to become someone else’s problem—people paid to humor you, only you don’t think anything is funny anymore.  And then maybe you get sick, cancer... and you suffer, in terrible pain.
“God could not have created mankind, certainly not in his image, unless he is the devil.  So whose child are you really?”
All eyes of the apostles turned to Jesus in shock. But also in great anticipation.
“Are you finished?” he asked.
“No,” I said.  “The only thing we have going for us is love.”
"Exactly..." said Jesus.
“But here’s what happens:  We fall hopelessly, desperately, obsessively in love—and most of the time the objects of our love and desire do not feel the same way, cannot reciprocate our feelings.  Or they do, but only for a little while, before they lie and cheat and break our hearts.  But let’s say two people find true romantic love.  This is a physical and chemical reaction in the body that releases endorphins and makes us feel good.  But it wears out!  It’s short term!  Studies have shown that love has a shelf life of between fifteen and thirty months.  After that, it’s more about patience and tolerance than genuine love. And though we con ourselves into believing otherwise, it’s always the same.
“And here I am, in love with a girl in a painting from over two centuries before my time, tortured by her image because her family shipped her out from Jamaica, where she was born and which she loved and longed for, shipped her to England, where she caught whooping cough because London back then was dirty and disease-ridden. And there she dies alone at the age of twelve.
“Why her, Father of Heaven and Earth?  Why Pinkie?   And why must I suffer this, this absurd situation?”
“Why not?” said Jesus.  “The Lord works in mysterious ways.”
I shook my head.  “Your proverbs, your parables, your prayers—they work to your advantage right now, among your crowd, the apostles—and, I can tell you, your wisdom endures for very many centuries, at least twenty—and you are one of the most revered and enduring figures in human history.  But if you showed up in my time, as you promised, I don’t know if your wisdom and spirituality would cut it.”  I paused, considering what I just said, which spawned a new idea.  “Why don’t you come back with me?  Save yourself from the horrible death planned for you, return with me to my time.”Judas, nearby, stirred.  He wanted his thirty pieces of silver.

Posted by Robert Eringer at 7:45 AM