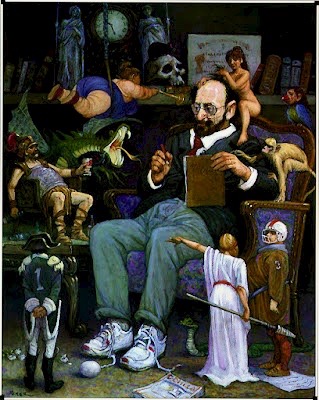 My physician listened sympathetically as I explained my into art experiences.

At one point, I think he stifled a laugh.  Then he took my blood pressure and listened to my heart and lungs, pronouncing my vital signs strong.  He poked around my mouth and probed my ears, assigned his nurse to draw two vials of blood and asked me to fill a specimen cup.

The doctor returned.  “Help is on its way,” he said, handing me a slip of paper.

“Doctor Stendhal is a psychiatrist.  I think he would be very interested to hear your story—and he will probably be able to help.”

He shrugged.  “Where else?”
One week later I met Dr. Henry Stendahl at his office, more of a den, absent of staff.  He possessed a kind face and was dressed casually in blue jeans, untucked shirt, sporting vest from Patagonia and tennis shoes.

Dr. Stendahl sat himself and me in easy chairs facing one another over a coffee table.

“So what brings you in?” he asked.

I assumed that my internist had already briefed him, but he needed to hear it directly from me.

I explained my strange odyssey into two paintings—Nighthhawks and The Night Café—what had transpired in each and how I found myself, on both occasions, at Wonder Bar in Asbury Park, New Jersey.

Dr. Stendahl did not act surprised or bewildered.  He just listened patiently, studying me, nodding and occasionally scribbling onto a clipboard.

After I finished, he said he had a few questions.  The first dealt with my overall health, which I said was excellent.

“Have you ever suffered from epilepsy?” he asked.

“Do you have any problem sleeping?”

“Do you have any problems with your eyesight?”

“Ever suffer from migraine headaches?”

The second line of questioning dealt with emotional problems.

Did my family have any history of mental illness?

Had I ever before sought psychiatric counseling or therapy before this?

“Are you under any stress?”

“I’m definitely stressed from what’s been going on.”

“Yes.  But mostly, waking up in New Jersey.”

“What about before the first time—any stress?”

“Do you feel depressed?”

“Do you drink alcohol?” he asked.

“Would you describe yourself as a light, moderate or heavy drinker?” he asked.

“What were you drinking at Wonder Bar?” he inserted quickly, eyes into mine.

I thought for a second, shook my head.  “Nothing.”

“On both occasions, I opened my eyes and there I was.  There wasn’t a drink in front of me and I did not feel as if I’d drunk anything.  And I did not order anything.”

Dr. Stendahl scribbled, looked up.  “Are you currently on any medications?”

“Have you ever been?”

He allowed his half-moon reading glasses to droop down his nose for a knowing eye gaze.  “Recreational drugs?”

“Have you ever been in a position where someone could slip you recreational drugs without you knowing it?”

I shrugged.  “I can’t think of any such situation.”

“Think about what you were doing before each, shall we say, encounter, with persons in these paintings.”

I considered this with interest.  Why hadn’t I thought of this myself?
“Before each experience I was killing time, getting away from work.”

“What is your line of work?”

“And in both cases your work was…?”  He gestured with his open palm for me to answer.

“I was in Chicago for a bookseller convention.  I don’t like crowds, but it’s where you get most of the players under one roof, business networking.  But I left, couldn’t take it.”

“Agoraphobic?  Do you fear crowds?”

“No—it’s not a fear thing.  I just needed fresh air. And to clear my head.”

“And the second encounter?”

“I’d just had a meeting with an editor at Yale University Press and I had time before my train was scheduled to depart.”

Dr. Stendahl nodded.  “When was the last time you took LSD?”

“Not knowingly,” he said.  “Is it possible you took it unknowingly?”

“Wow.”  This intrigued me.  “You think these are LSD flashbacks?”

“There is always a rational reason behind irrational behavior,” said Dr. Stendahl.  “My job is to eliminate the options so that I can figure out what’s really going on in your mind.”

“Inside a painting?”  Dr. Stendahl shook his head and smiled.  “ No, of course not.  A painting is merely an illusion.  An artist uses materials—a surface, brushes and paints—to create an illusion that our eyes convey to our brains and our brains are fooled into interpreting it as an image.  It is physically impossible to enter a painting.   So if we rule out LSD flashbacks, which stimulate hallucination, then we need to look at other causes for why you are imagining these things.”

“But how do you explain my showing up in Asbury Park, New Jersey?”

“Easy,” said Dr. Stendahl.  “You took yourself there.”

“Schizophrenics hear voices in their brains,” said Dr. Stendahl.  “I’m not diagnosing you as schizophrenic—yet—but many studies prove that the so-called voices belong to the schizophrenic himself.  You’re getting to Asbury Park, New Jersey, belongs to you.  You blacked it out.”

“I went there myself?”

“Blackouts are not as uncommon as you may think.  But let’s talk about hallucinations first.  From your description, you saw characters in paintings come to life and you heard them speak.  Correct?”

Dr. Stendahl noted this.  “Olfactory,” he said.  “Did you taste anything?”

“Yes!  Yes, I did.  Also in Arles.  I sipped absinthe and it tasted like licorice.”

He scribbled.  “Gustatory,” he said.  “But no aroma or tasting in”—he smiled—“in Nighthawks?”

“Not that I recall.”

“Any tactile sensations?” he asked.  “Touching?”

I considered this.  In Nighthawks a gun was shot at me, but I felt nothing.  Nor did I recall feeling anything in The Night Café.  “No.”

“And you agree if it were real, not a hallucination, you would have felt something?”

“Good.  Then it’s not as if you believe that you were really inside a painting, correct?”

“Let’s move to blackouts,” said Dr. Stendahl.  “You told me that normally you are a light drinker.  Are there any occasions when you have drunk too much alcohol?”

“But how did I get to New Jersey from Chicago and then from New Haven?  I didn’t drive.  My car was home waiting for me.  There’s nothing on my credit card for renting a car or flying.”

“That’s why we call it a blackout.”  He smiled patiently.  “But now my question: what do you want to do about it?”

“We can try to find the root cause of these hallucinations, through psychoanalysis, which would probably put an end to it.  But that takes time—months, maybe years.  Or we can medicate.”

You will probably hallucinate again.  And these hallucinations appear to be expanding in sensory modality.  But the real problem is the blackout periods that you do not recall.  You may, during those periods, pose a danger not only to yourself, but also to others.”

“Tell me about medication,” I said.

“There have been huge advancements in psycho-pharmacology,” said Dr. Stendahl.  “People with serious disorders that could not have been cured decades ago now live relatively normal lives.  It’s really about balancing the brain—giving it a boost of something that may be depleted, like neurotransmitters.  I’d like to put you on two medications, which work well in conjunction with one another:  Zyprexa and Abilify.”

“Do they have any side effects?”

“What does it take away?”

Dr. Stendahl offered a half-smile.  “If you’re prone to hallucination, it will manifest in other ways.”  He paused.  “What I suggest is, try the medication, see how you feel after a month—both meds usually take three to four weeks to kick in—and we’ll assess after that.”