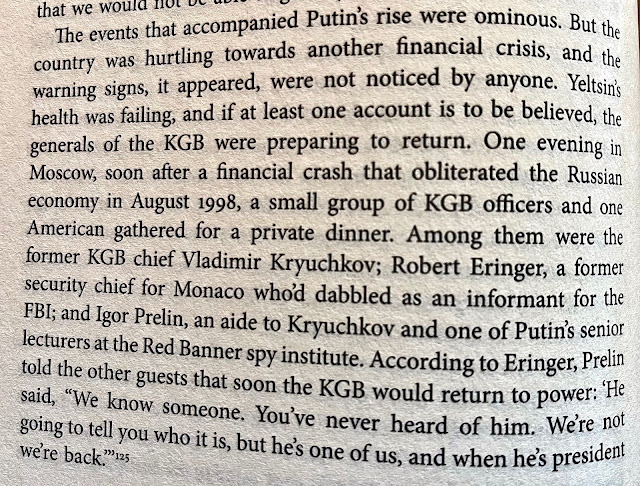 Catherine's acclaimed book on Vladimir Putin's crooked rise to power in Russia included the above reference to me.

It is not an accurate depiction, hence I correct it as follows:

One evening in Moscow in June 1997, two KGB officers and two Americans gathered for a private dinner in Moscow.

One of the Americans was Edward Lee Howard, the only CIA officer to ever successfully defect to the Soviet Union; the other was Robert Eringer, who was secretly working for FBI Counterintelligence to arrange a rendition of Howard i.e. bring him home to face American justice.

Eringer, who would a few years later become intelligence adviser to Prince Albert of Monaco and soon after that create the principality’s first intelligence service, had been an independent contractor for the FBI since 1993 and his mission had evolved beyond renditioning Howard to cajoling former KGB chairman Vladimir Kryuchkov, who was present at the dinner, to open up about topics of interest (unwittingly) to the FBI.

The other Russian KGB operative at the table was Igor Prelin, an aide to Kryuchkov and one of Putin's lecturers at the Red Banner spy institute.

According to Eringer, Prelin told him that soon the KGB would return to power. He said, "We know someone. You've never heard of him. We're not going to tell you who it is, but he's one of us, and when he's president we're back."

And, indeed, they were.

Putin tracks down and assassinates (in Britain and Europe) those Russians he believes betrayed the Motherland.

He has another strategy for investigative journalists of various nationalities who target his corruption and murderous character: With unlimited riches (siphoned from the Russian state and energy companies), he ties them up (as a warning to other such investigative reporters) with expensive litigation in the UK's High Court, which has the dubious distinction of rendering itself a willing participant in establishing London as Libel Headquarters of the world.

Russia and China have learned all the tricks about how to use our own systems against us.

While they proactively strategize by playing chess, our feeble leaders  play a reactive game of checkers as they distract the American public with nonsensical issues.

A London libel case over a book about the rise of Russia’s president and his circle has far-reaching implications for freedom of expression.