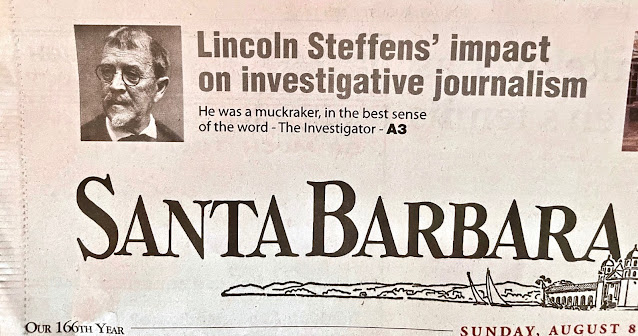 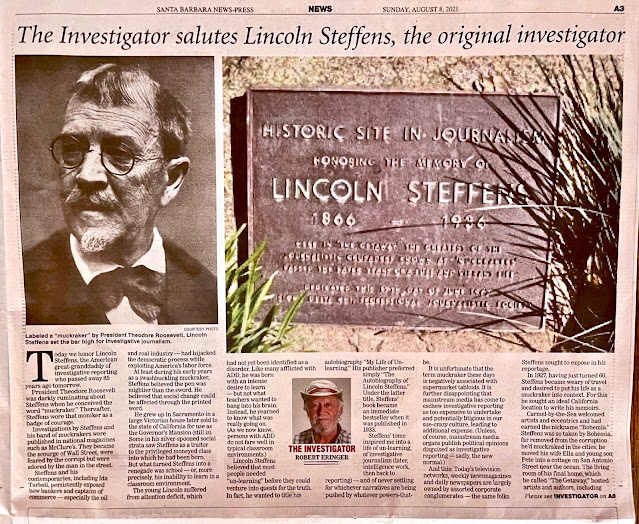 Today we honor Lincoln Steffens, the American great-granddaddy of investigative reporting who passed away 85 years ago tomorrow.

President Theodore Roosevelt was darkly ruminating about Lincoln when he conceived the word muckraker. Thereafter, Mr. Steffens wore that moniker as a badge of courage.

Investigations by Lincoln and his band of muckrakers published in national magazines, such as McClure’s, became the scourge of Wall Street, feared by the corrupt and adored by the man in the street.

Lincoln and his contemporaries, including Ida Tarbell, persistently exposed how bankers and captains of commerce—especially the oil and coal industry—had hijacked the democratic process while exploiting America’s labor force.

At least during his early years as a swashbuckling muckraker, Mr. Steffens believed the pen was mightier than the sword; believed that social change could be affected through the printed word.

He grew up in Sacramento, a large Victorian house later sold to the State of California for use as the Governor’s Mansion (still is). Some in his silver-spooned social strata saw Lincoln as a traitor to the privileged moneyed class into which he had been born. But what turned Mr. Steffens into a renegade was school—or, more precisely, his inability to learn in a classroom environment.

The young Lincoln suffered from attention deficit, which had not yet been identified as a disorder.  Like many afflicted with ADD, he was born with an intense desire to learn—but not what teachers wanted to bang into his brain. Instead, he yearned to know what was really going on.

(As we now know, persons with ADD do not fare well in typical classroom environments.  These are the daydreamers, whose brains cannot conform to rote learning.  Society strives to put such persons "on track" by prescribing Ritalin and Adderall to “focus” their minds into submission. Normal people generally stop learning by the time they reach the age of 20 and enter the groove in which they remain until retirement (as encouraged by society). Conversely, ADD sufferers—or enjoyers—do not learn much until they’ve had a couple decades to process the world around them—and then they never stop learning.)

Lincoln Steffens believed that most people needed “un-learning” before they could venture into truth questing.  In fact, he wanted to title his autobiography My Life of Un-learning.  His publisher preferred The Autobiography of Lincoln Steffens, which became an immediate bestseller when it was published in 1933.

This tome inspired me into a life of un-learning, of investigative journalism (later, intelligence, then back to reporting)—and of never settling for whichever narratives are being pushed by whatever powers-that-be.

It is unfortunate that the term muckraker these days is negatively associated with supermarket tabloids.  It is further disappointing that mainstream media has come to eschew investigative reporting as too expensive to undertake and potentially litigious in our sue-crazy culture, leading to additional expense. (Unless, of course, mainstream media organs publish political opinion disguised as investigative reporting—sadly, the new normal.)

And this:  Today's television networks, weekly newsmagazines and daily newspapers are largely owned by assorted corporate conglomerates—the same folks Lincoln sought to expose in his reportage.

In 1927, having just turned 60, Mr. Steffens became weary of travel and desired to put his life as a muckraker into context.  For this he sought an ideal location to write his memoirs. 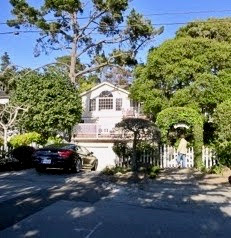 Carmel-by-the-Sea welcomed artists and eccentrics and had earned the nickname “Bohemia.”  Lincoln was so taken by Bohemia, far removed from the corruption he’d muckraked in the cities, he moved his wife Ella and young son Pete into a cottage on San Antonio Street near the ocean. The living room of his final home, which he called The Getaway, hosted artists and authors, including Ernest Hemingway, John Steinbeck and Sinclair Lewis.

Just as San Francisco’s Bohemian Club with its elite encampment 90 miles north of Carmel, near the Russian River, was corrupted by the kind of corporate executives and their select politicians—of the sort Lincoln strove to expose—Bohemia is populated these days not by artists and writers but by high-end corporate retirees.

With antiquated copyright laws (in the age of social media) still on the books, there has never been a better time for ne’er-do-well photographers (often untrained, more likely self-proclaimed) to eke a dishonest living from scamming people with offers of “free” (supposedly gifted) photographs.

Bloomberg.com recently reported on this new phenomenon, focusing on a “rock photographer” named Larry Philpot who, instead of seeking publishers for his pics, trolls for copyright infringements with the express objective of extracting legal settlements from unwitting victims.

Philpot, who declined to comment, is little known among photojournalists, though he’s notorious among free-speech advocates who accuse him (and others like him) of pulling off what essentially is a racket. “It’s totally legal,” says Chip Stewart, a lawyer and professor at Texas Christian University. “It’s just evil.”

In a paper—Rise of the Copyleft Trolls—presented this year to the Association for Education in Journalism and Mass Communication, Professor Stewart documents 30 such cases of photographers who engage in this pernicious practice.

We know of at least one photographer in Santa Barbara who operates such predatory ploys.

Here is how such a scam works:

Posing as a “fashion photographer,” a copyright troll offers to take your photograph as a “gift.” Then, without your permission or knowledge, he registers your image as his copyright—or argues it is already copyrighted by law.

He then waits and watches, trolling the Internet for “unauthorized usage.”

You didn’t sign a contract for receiving a gift, right?

But now that you—or someone else—has posted the pic to social media, he stakes his claim for copyright violation.

And what a stake these scumbags attempt to claim!

As with Larry Philpot in Bloomberg’s story, the typical lawsuit demands $150,000 (the maximum penalty allowed by law).

Bloomberg, again: These suits are intimidating but they’re not meant to go to court. Philpot asks for—and receives—default judgments when targets don’t respond. When they do, he’ll offer to accept a much lower payment, sometimes as much as $40,000.

Yes, these copyright conmen count on the presumption that most people don’t want to get stuck in the expensive judicial web (scammers themselves use contingency lawyers, of the dirt-bag variety, who cost them nothing other than a healthy split of the kill).  Hence, these scammers (and their scummy lawyers) are accustomed to victims paying them off just to see the back of them—what is known as go away money.

The good news, according to Professor Stewart, is that the courts have recently been expressing “a general distaste” for this sort of legal shakedown.  “They are finding creative ways,” he wrote, “to apply the fair use doctrine to protect unwitting users facing lawsuits that could break them financially.”

Suffice to say, an ounce of prevention is worth a pound of cure.

Consequently, if any photographer offers you a free photo session as a gift… RUN!

This is how the Botox blondes of Montecito deal with the parking shortage on Coast Village Road... 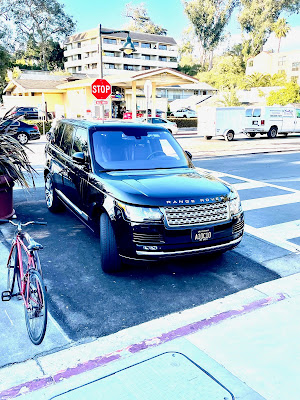 And this precious Montecitan nitwit is so concerned about his precious Porsche, he routinely takes up two parking spaces outside Renaud’s on Coast Village Road at a time when (due to Covid-inspired outdoor dining) parking space is severely limited... 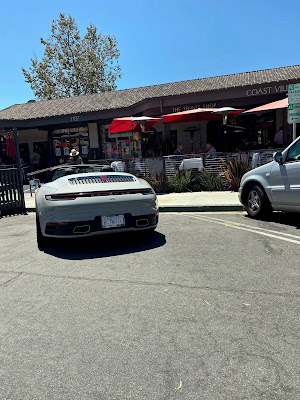