SB NEWS-PRESS: THE INVESTIGATOR: ON SAFARI: A (JUNGLE) CRUISE DOWN STATE STREET 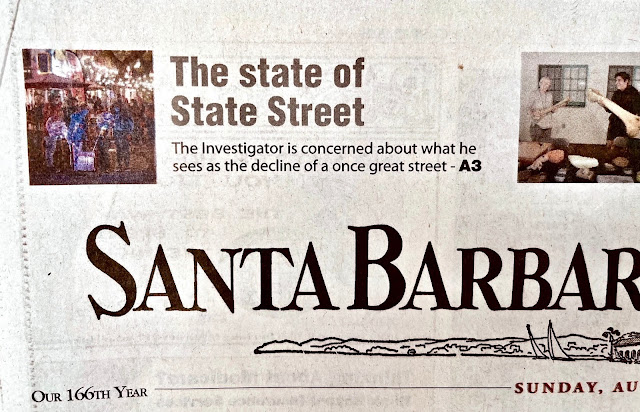 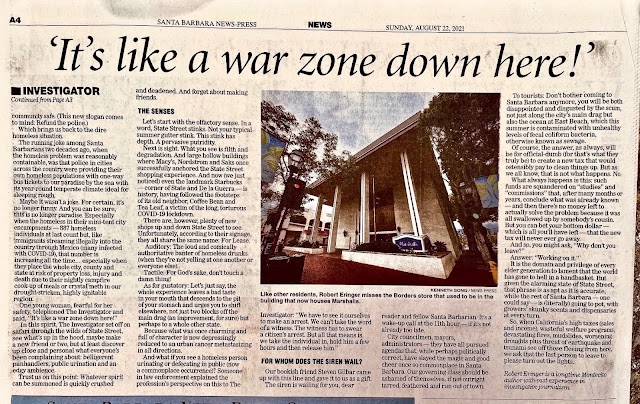 When this columnist first moved to Santa Barbara 20 years ago, State Street was a carnival of color and vibrancy, anchored by a Borders bookstore with on-site coffee bar, in front of which, on Saturday afternoons in autumn, professional musicians performed to appreciative, jovial crowds of shoppers and strollers. Nearby, on De la Guerra Plaza, a book fair would be in progress.

The theme was happiness and gaiety. And what an amazingly magical place it was!

Tragically, the exact opposite.

Borders is no longer, traded out for a low-end discount warehouse.

And no music on the piazza outside its doors.

The only cheeriness is among consumers who, trying to satiate a short-term consumer fix, uncover a bargain inside Marshall’s.

You can’t even sit down; the benches are all occupied by rude and unkempt homeless people and their multiple bags. And if a bench suddenly becomes available? From the look of most of these scabby bench-dwellers, a 144-ounce bottle of extra-strength Lysol wouldn’t bring it back to life.

Who’s responsible for this?

You can partly blame Borders’ demise on Amazon. Call that “progress” if you will—or cast blame on a culture that is becoming less book literate and more ideological each day judging by the radical teachings of our activist educators along with the shortened attention span our children cultivate from anti-social media.

But whom do you blame for all the abandoned premises up and down the long boulevard? Commercial desertion resulted from a combination of oppressive COVID-19 lockdowns (bad governance, read the science censored by anti-social media) and greedy landlords (who have, poetically, discovered a reversal of fortunes). And, perhaps (again), blame Amazon.

Ultimately, however, the responsibility for Santa Barbara’s State Street decline into a cesspool must be shouldered by those who govern us; our own self-important public officials who have not earned their (highly-paid) keep but instead failed us with misguided policies and who, consequently, no longer deserve our trust or confidence. They have all performed abominably at maintaining city standards since the turn of the century.  They propose (or pretend) solutions as they allow the decay to proliferate while disallowing law enforcement from keeping our community safe. (This new slogan comes to mind: Refund the Police.)

Which brings us back to the dire homeless situation.

The running joke among Santa Barbarians two decades ago, when the homeless problem was reasonably containable, was that police in cities across the country were providing their own homeless populations with one-way bus tickets to our paradise by the sea with its year-round temperate climate ideal for sleeping rough.

Maybe it wasn’t a joke. For certain, it’s no longer funny. And you can be sure, this is no longer paradise. Especially when the homeless in their mini-tent city encampments—887 homeless individuals at last count but, like immigrants streaming illegally into the country through Mexico (many infected with COVID-19), that number is increasing all the time… especially when they place the whole city, county and state at risk of property loss, injury and death due to their nightly campfire cook-up of meals or crystal meth in our drought-stricken, highly ignitable region.

One young woman, fearful for her safety, telephoned The Investigator and said, “It’s like a war zone down here!”

In this spirit, The Investigator set off on safari through the wilds of State Street, see what up in the hood, maybe make a new friend or two, but at least discover up close and personal what everyone’s been complaining about: belligerent panhandlers, public urination and an edgy ambience.

Trust us on this point: Whatever spirit can be summoned is quickly crushed and deadened. And forget about making friends.

Let’s start with the olfactory sense. In a word, State Street stinks. Not your typical summer gutter stink. This stink has depth. A pervasive putridity.

Next is sight. What you see is filth and degradation. And large hollow buildings where Macy’s, Nordstrom and Saks once successfully anchored the State Street shopping experience. And now (we just noticed) even the landmark Starbucks—corner of State and De la Guerra—is history, having followed the footsteps of its old neighbor, Coffee Bean, a victim of the long, torturous COVID-19 lockdown. There are, however, plenty of new shops up and down State Street to see. Unfortunately, according to their signage, they all share the same name: For Lease.

Auditory: The loud and comically authoritative banter of homeless drunks (when they’re not yelling at one another or everyone else).

As for gustatory: Let’s just say, the whole experience leaves a bad taste in your mouth that descends to the pit of your stomach and urges you to shift elsewhere, not just two blocks off the main drag (an improvement, for sure) but perhaps to a whole other state.

Because what was once charming and full of character is now depressingly reduced to an urban cancer metastasizing in all directions.

And what if you see a homeless person urinating or defecating in public (now a commonplace occurrence)? A Santa Barbara deputy sheriff explained law enforcement’s perspective on this to The Investigator: “We have to see it ourselves to make an arrest. We can’t take the word of a witness. The witness has to swear a citizen’s arrest. But all that means is, we take the individual in, hold him a few hours and then release him.”

FOR WHOM DOES THE SIREN WAIL?

Our bookish friend Steven Gilbar came up with this line and gave it to us as a gift.

The siren is wailing for you, dear reader and fellow Santa Barbarian. It’s a wake-up call at the 11th hour—if it’s not already too late.

City councilmen, mayors, administrators—they have all pursued agendas that, while perhaps politically correct, have slayed the magic and good cheer once so commonplace in Santa Barbara. Our governing class should be ashamed of themselves, if not outright tarred, feathered and run out of town.

To tourists: don’t bother coming to Santa Barbara anymore, you will be both disappointed and disgusted by the scum, not just along the city’s main drag but also the ocean at East Beach, which this summer is contaminated with unhealthy levels of fecal coliform bacteria, otherwise known as sewage.

Of course, the answer, as always, will be for official-dumb (for that’s what they truly be) to create a new tax that would ostensibly pay to clean things up. But as we all know, that is not what happens. No. What always happens is this: such funds are squandered on “studies” and “commissions” that, after many months or years, conclude what was already known—and then there’s no money left to actually solve the problem because it was all swallowed up by somebody’s cousin. But you can bet your bottom dollar—which is all you’ll have left—that the new tax will never ever go away.

And so, you might ask, why don’t you leave?

Answer: Working on it.

It is the domain and privilege of every elder generation to lament that the world has gone to hell in a handbasket. But given the alarming state of State Street, that phrase is as apt as it is accurate, while the rest of Santa Barbara—one could say—is (literally) going to pot, with growers’ skunky scents and dispensaries at every turn.

So, when California’s high taxes (sales and income), wasteful welfare programs, devastating fires, mudslides, worsening droughts plus threat of earthquake and tsunami see off those fleeing from here, we ask that the last person to leave please turn out the lights.

Posted by Robert Eringer at 8:39 AM