SB NEWS PRESS: THE INVESTIGATOR: PUBLIC SERVANTS MUST BE ACCOUNTABLE TO THE PUBLIC 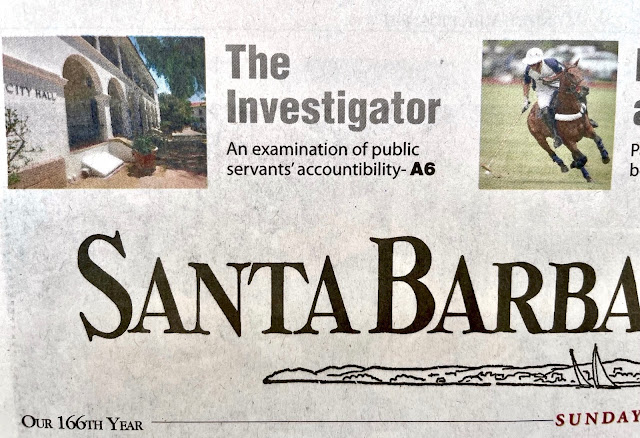 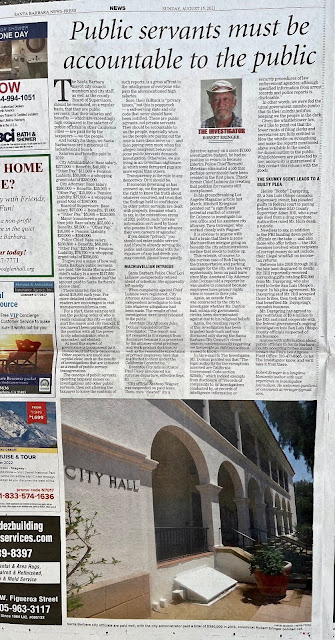 The mayor and city council members, Board of Supervisors, City Administrator and staff, City Attorney and staff should be reminded, on a regular basis, that they are public servants; that their salaries and benefits—which are exceedingly high compared to the salaries of public officials in other California cities—are paid for by the taxpayers i.e. we the people.

And luckily for them, we Santa Barbarians are a generous (if lackadaisical) bunch.

(These salaries rise by about $10,000 each year. For more detailed information, readers are encouraged to visit transparentcalifornia.com.)

For a start, these salaries tell you the pecking order of who is really running this city—and it ain’t the mayor and city council. If you haven’t been paying attention, the position with all the power is City Administrator, who is appointed, not elected.

At least this aspect of governance is transparent (as it should be, if not truly democratic).  Other aspects are much less crystal clear, such as the results of investigations that are initiated as a result of public servant transgressions.

The concept of public servants spending taxpayer money on investigations into other public servants and then not allowing the taxpayer to know the contents of such reports is a gross affront to the intelligence of everyone who pays the aforementioned high salaries.

Sure, their fallback is “privacy issues” but this is poppycock—a self-serving state and city code that never should have been codified. These are public servants, not private servants. They should be accountable to we the people, especially when we the people are paying out the nose to have them serve us—and then paying even more when the alleged miscreant behavior of some public servants demands investigation. Otherwise we are living in an Orwellian nightmare in which the farmyard pigs are more equal than others.

Transparency is the rule in any democracy. Or should be.

If someone governing us has screwed up, we the people have the right to know the truth about whatever occurred, not trust that the findings held in confidence by other public servants are dealt with properly. Because what’s to say, in the contentious arena of 2021 politics, such “private” information isn’t used by those who possess it to further advance their own careers or agendas?

If you desire “privacy,” you should not enter public service. And if you’re already serving the public and cannot deal with the exposure of any bad deeds you may commit, please leave quietly.

Police Chief Lori Luhnow unexpectedly retired ahead of schedule (she apparently left quietly). When complaints against Ms. Luhnow were registered, City Attorney Ariel Calonne hired an independent investigator to look into whatever allegations had been made. The results of that investigation were never released to the public.

Assistant City Attorney John Doimas responded to The Investigator: “The report was not released as it is exempt from disclosure because it is protected by the attorney-client privilege and work product doctrine, as well as the reasonable expectation of privacy employees have that is afforded to them under the California Constitution.”

City official Anthony Wagner was suspended on paid leave and then, once “cleared” (by a detective agency on a mere $7,000 investigative budget), had no position to return to because Police Chief Bernard Melekian eliminated a title that perhaps never should have been created in the first place, thank Ms. Luhnow for that for reasons still unexplained.  (Unlike previous investigations conducted by the same outside agency—Sintra, ex-police officers—into former police chief Cam Sanchez and the police/DUI case of Peter Lance, the results of this low-budget/near (not far)-reaching investigation were—hallelujah—released to the public.)

In his groundbreaking Los Angeles Magazine article last March, Mitchell Kriegman pointed out “a significant potential conflict of interest for Mr. Calonne to investigate his own office and his assistant city attorney, Tava Ostrenger, who worked closely with Wagner.”

It is obvious to anyone with half a brain that there is some Machiavellian intrigue going on beneath the city administration’s surface that needs to bubble up.

This extends, of course, to the curious case of Rob Dayton, the transportation and parking manager for the city, who has, very mysteriously, been on paid leave since May. Assistant City Attorney John Doimas, again, to Noozhawk, about Mr. Dayton: “I am unable to offer any comment due to an employee’s privacy rights related to their employment.”

Again, an outside firm was contracted by the city to investigate whether or not Mr. Dayton had, within city government circles, been discriminated against due to his religious beliefs.

Again, the resulting report of this investigation has been branded hush-hush and is discussed only in city council closed session, contemptuously rendering we the people as children without a need to know.

In his e-mail to The Investigator, Mr. Doimas pointed out that “The legal authority for the exemptions asserted are California Government Code section 6254(k),” which indeed exempts from disclosure of “records of complaints to, or investigations conducted by, or records of intelligence information or security procedures of law enforcement agencies, although specified information from arrest records and police reports is disclosable.”

In other words, we were fed the usual government mumbo-jumbo that (to their minds) justifies keeping we the people in the dark.

It is high time for local media—which generally and politely accepts the status quo in Santa Barbara—to delve into such matters and attempt to access (through the back door, if necessary) reports paid for with public funds. This is what the fourth estate does (or is supposed to do) for keeping those who govern us in check—and also to keep the governed informed even while government strives to keep the public un-informed by hiding behind a curtain or “code” that serves only themselves and not the perpetually-paying public.

Otherwise, welcome to the PRC (Peoples Republic of California), where mandarins rule and everyone else should just accept the little they’re told and not ask questions.

The Investigator asked former city council member and mayoral candidate Randy Rowse where he stands on all this so-called “privacy” nonsense and what, as mayor, he might do to remedy the situation.

Mr. Rowse did not respond. (We shall reach out to the other mayoral candidates in due course on this and other issues.)

While it may seem strange that a candidate campaigning for elective office prefers not to declare his stance when asked by a representative of the media about a particular issue, the truth these days is quite the opposite, as absurd as that may sound if explained by a political operative (and ally of Mr. Rowse) who told The Investigator, “Of course, he doesn’t want to tell you where he stands on this—he wants to win the election!”

Or, as Mr. Rowse himself succinctly put it to this column: “I’m pretty vanilla.” He was speaking generally, not to the specific issue requested of him. Which means we’re not sure what to make of this candidate’s stance on issues in general, only that we prefer chocolate, as in, please take a friggin’ stand based on your true convictions or move aside for someone who will.

(Little wonder the voting public has become cynical about politics and politicians, about where they truly stand on issues and if they’ll keep their campaign promises—sadly, a rare occurrence.)

Back to city employees. Given the whistleblower law, we’d like to point out that the lower ranks of filing clerks and secretaries are fully entitled to blow the whistle on wrongdoing and make the reports mentioned above available to the media for dissemination to the public. Whistleblowers are protected by law; anonymity is guaranteed if they contact this column with the goods.

THE SKUNKY SCENT LEADS TO A GUILTY PLEA

Needless to say, in addition to the FBI hunting down public officials on the take—and also those who offer bribes—the IRS becomes involved when recipients of corrupt money do not include their illegal windfall on income-tax returns.

Mr. Dayspring has agreed to pay restitution of $3.4 million to the IRS and must also cooperate with the federal government’s ongoing investigation into public officials in this county suspected of malfeasance.

Anyone with information about public officials in Santa Barbara accepting bribes should contact the FBI’s Los Angeles Field Office: 310.477.6565. (Or let The Investigator know and we’ll take it from there.)