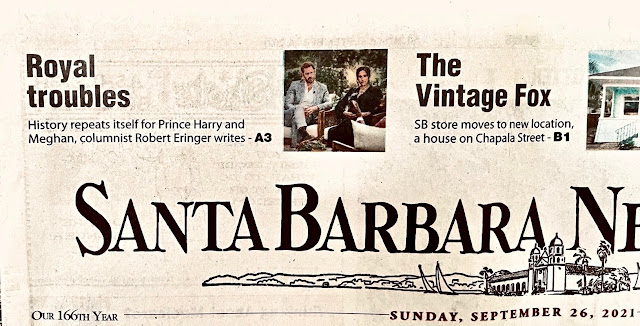 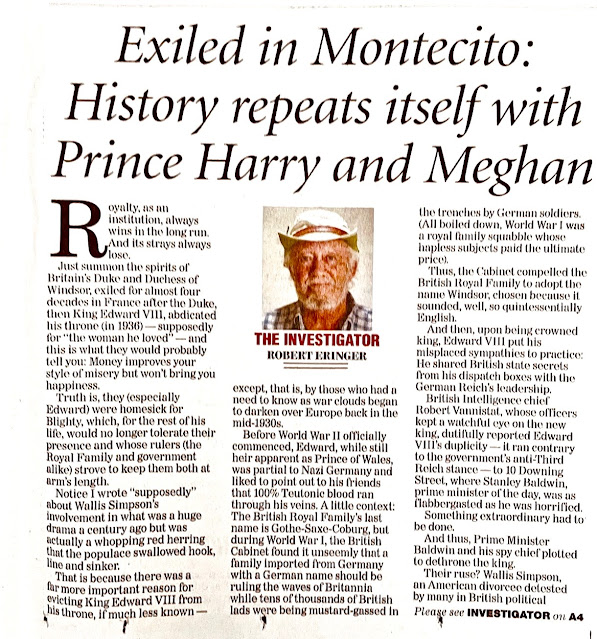 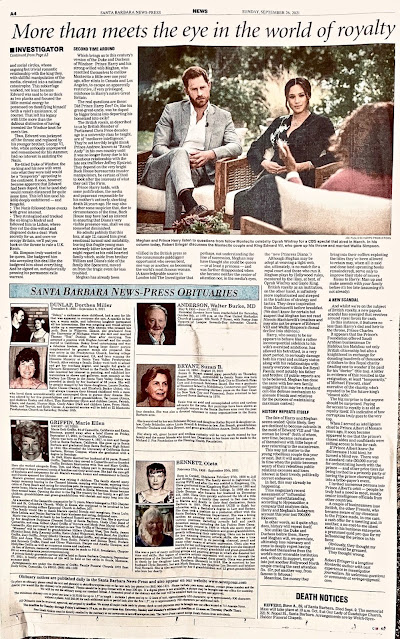 Royalty, as an institution, always wins in the long run. And its strays always lose.

Just summon the spirits of Britain’s Duke and Duchess of Windsor, exiled for almost four decades in France after the Duke, then King Edward VIII, abdicated his throne (in 1936)—supposedly for “the woman he loved”—and this is what they would probably tell you: Money improves your style of misery but won’t bring you happiness.

Truth is, they (especially Edward) were homesick for Blighty, which, for the rest of his life, would no longer tolerate their presence and whose rulers (the Royal Family and government alike) strove to keep them both at arm’s length.

Notice I wrote “supposedly” about Wallis Simpson’s involvement in what was a huge drama a century ago but was actually a whopping red herring that the populace swallowed hook, line and sinker. That is because there was a far more important reason for evicting King Edward VIII from his throne, if much less known, except, that is, by those who had a need to know as war clouds began to darken over Europe back in the mid-1930s.

Before World War II officially commenced, Edward, while still heir apparent as Prince of Wales, was partial to Nazi Germany and liked to point out to his friends that 100% Teutonic blood ran through his veins. A little context: The British Royal Family’s last name is Gothe-Saxe-Coburg but during World War I the British Cabinet found it unseemly that a family imported from Germany with a German name should be ruling the waves of Britannia while tens of thousands of British lads were being mustard-gassed in the trenches by German soldiers. (All boiled down, World War I was a royal family squabble whose hapless subjects paid the ultimate price.) Thus, the Cabinet compelled the British Royal Family to adopt the name Windsor, chosen because it sounded, well, so quintessentially English.

And then, upon being crowned king, Edward VIII put his misplaced sympathies to practice:  he shared British state secrets from his dispatch boxes with the German Reich’s leadership.

British Intelligence chief Robert Vannistat, whose officers kept a watchful eye on the new king, dutifully reported Edward VIII’s duplicity—it ran contrary to the government’s anti-Third Reich stance—to 10 Downing Street where Stanley Baldwin, prime minister of the day, was as flabbergasted as he was horrified.

Something extraordinary had to be done.

And thus, Prime Minister Baldwin and his spy chief plotted to de-throne the king.

Their ruse? Wallis Simpson, an American divorcee detested by many in British political and social circles, whose ongoing but trivial romantic relationship with the king they, with skillful manipulation of the media, elevated into a national catastrophe. This subterfuge worked, not least because Edward was said to be as thick as two planks and focused the little mental energy he possessed on dandifying himself (with a valet’s assistance, of course), leaving his legacy with little more than the dubious distinction of having invented the Windsor (tie) knot.

Thus, Edward was jockeyed off the throne and replaced by his younger brother, George VI, who, while seriously unprepared and is remembered for his stammer, had no interest in assisting the Nazis.

Re-titled Duke of Windsor, the ex-king and his new wife went into what they were told would be a “temporary” uprooting to the continent. It soon, however, became apparent that Edward had been duped; that he (and she) would remain distanced for quite some time. This left him (and his wife) deeply embittered—and vengeful.

The Nazis followed these events with great interest. They strategized and tracked the ex-king to Madrid and followed him to Lisbon where they cut the dim-witted and disgraced duke a deal: Work secretly for us and once we occupy Britain we’ll put you back on the throne to rule a UK Reich.

Ms. Simpson truly wanted to be queen. She badgered him into accepting this deal like she badgered him about everything. And he signed on, metaphorically penning his permanent exile warrant.

Which brings us to this century’s version of the Duke and Duchess of Windsor:  Prince Harry and his strong-willed wife Meghan, who resettled themselves to mellow Montecito a little over one year ago, after stints in Canada and LA, to escape an apparently restrictive if very privileged existence in Harry’s native Great Britain.

The real questions are these:  Did Prince Harry flee? Or, like his great-great-uncle, was he duped by bigger brains into departing his homeland into exile?

The British royals, as described to us by (UK) Member of Parliament Chris Price decades ago in a university class he taught, are of “mediocre intelligence” i.e. not terribly bright (think Prince Andrew, known as “Randy Andy” in his own country until it was no longer funny due to his licentious relationship with the late sex trafficker Jeffrey Epstein). They depend on the very bright Buck House bureaucrats (master manipulators, be certain of that) to look after what they call The Firm’s interests.

Prince Harry (who some believe—due to an eerie resemblance—was fathered by calvary officer James Hewitt, with whom Princess Diana had a passionate affair) holds, with some justification, the media and paparazzi responsible for his mother’s untimely, shocking death 24 years ago.  He may also harbor some suspicion that, due to circumstances of the time, Buck House may have had an interest in ensuring that Diana’s very visible presence was, shall we say, somewhat diminished. He admits publicly that this loss, at age 12, caused him great emotional turmoil and instability, leaving this fragile young man extremely bitter toward what he might regard as his cold-hearted family which, aside from brother William and Diana’s side of the family (the Spencers), moved on from the tragic event far less troubled.

Meghan has already been vilified in the UK press as the consummate gold-digger/opportunist who seems bent, one way or another, on becoming the world’s most famous woman. (A knowledgeable source in London told The Investigator that perhaps, not understanding the line of succession, Meghan may have thought she could be queen—or at least a princess—and was further disappointed when she became neither the center of attention nor, in the media’s eyes, the “new Princess Diana.”)

Although Meghan may be adept at weaving a tight web, she, ultimately, is no match for a royal court and those who run it. Meghan plays by Hollywood rules, mentored by the likes, at best, of Oprah Winfrey and Gayle King; British royalty as an institution, on the other hand, is infinitely more sophisticated and steeped in the tradition of strategy and tactics; they draw inspiration from Machiavelli before breakfast. (We don’t know for certain but suspect that Meghan has not read Niccolo Machiavelli’s treatises and may also not be aware of Edward VIII and Wallis Simpson’s dismal decline into oblivion.)

Harry, who seems to be (or appears to behave like) a rather inconsequential sidekick to his wife’s oversized ambitions, has allowed his betrothed, in a very short period of time, to seriously damage both his royal and military status along with his relationships with nearly everyone within the Royal Family, most notably his father and brother. (If public reports are to be believed, Meghan has done the same with her own family, suggesting this may be a standard cult-like defense mechanism to alienate friends and relatives for the purpose of maintaining maximum control.)

The fate of Harry and Meghan seems sealed: Quite likely, they are destined to become outcasts in the mold of Edward VIII and “the woman he loved” (both of whom, over time, became caricatures of themselves) with little hope of ever returning to the mainstream.

This may not matter to the young rebellious couple this year or next. But it will matter much in time when the public becomes weary of their relentless PR excesses and loses interest in their trendy, politically correct endeavors. In fact, this may already be happening.  Time magazine’s recent assessment of “influential couples” notwithstanding, according to Hypeauditor, a company that analyzes data, Harry and Meghan’s Instagram account this year lost 700,000 followers.

In other words, as it quite often does, history will repeat itself: Because not unlike the Duke and Duchess before them, Harry and Meghan will, we speculate, ultimately lose relevancy and come to deeply regret having detached themselves from the world’s most venerable institution and, without its support, morph into just another Hollywood North couple craving the next attention fix.  (Or, put another way, from famous to fatuous.)

Meantime, the money they bring into their coffers exploiting the titles they’ve been allowed to retain may, when all is said and done (and upcoming books remaindered), serve only to improve their style of misery.

Memo to Harry: Grow a pair; make amends with your family before it’s too late (assuming it’s not already).

And whilst we’re on the subject of royalty (British royalty in particular) a new payola scandal has emerged that revolves around royal favors for cash. In this instance, it features no less than Harry’s dad and heir to the throne Prince Charles. It appears that the Prince’s Foundation offered Saudi Arabian businessman Dr. Mahfouz bin Mahfouz not only UK citizenship but also a knighthood in exchange for donating hundreds of thousands of dollars to this Royal charity (leading one to wonder if Mahfouz paid for his “doctor” title too). A letter in evidence of this resulted in the resignation, at least “temporarily,” of Michael Fawcett, chief executive of the charity and reputed to be the future king’s “closest aide.”

The big surprise is that anyone should be surprised. Paying for access to royalty is as old as royalty itself, indicative of how corruption truly goes to the very top.

When I served as intelligence chief to Prince Albert of Monaco years ago it soon became apparent to me that the Prince’s closest aides and confidants were selling access to him for cash; if Albert knew (he did because I told him), he turned a blind eye.  There was a standard rate (50,000 euros) for orchestrating lunch with the Prince—and other price tiers for being invited to a princely party or having the Prince choreographed into a bribe-payer’s event.

I invited numerous persons into Prince Albert’s orbit—people he truly had a need to meet, mostly senior intelligence officials from other countries. A couple of businessmen (one British, the other French) who became aware of my closeness to the Prince made, in one case, a cash offer for a meeting and, in another, a no-cost-to-me silent stake in his business enterprise, a presumed quid pro quo for my influencing the Prince in his favor. Obviously, they thought my palms could be greased.

Posted by Robert Eringer at 7:19 AM