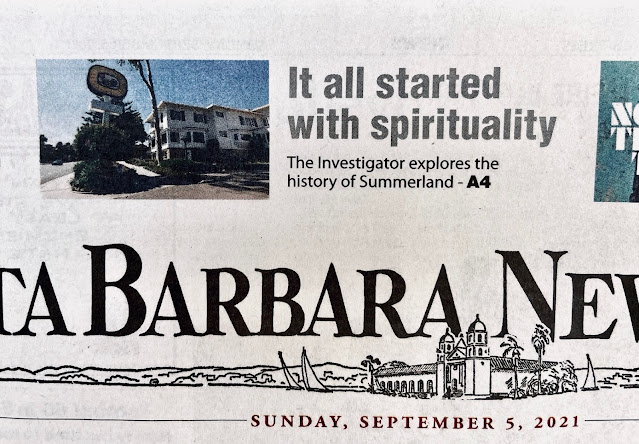 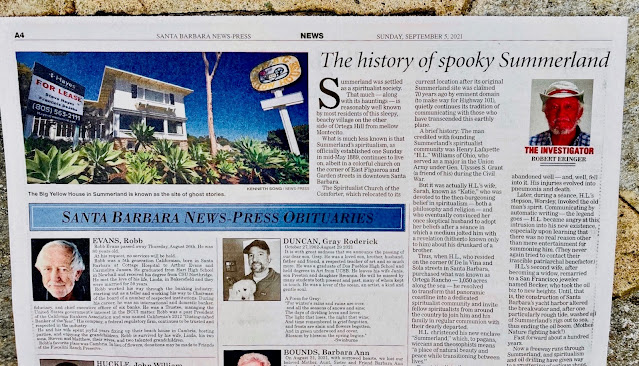 Summerland was settled as a spiritualist society.

That much—along with its hauntings—is reasonably well known by most residents of this sleepy, beachy village the other side of Ortega Hill from mellow Montecito.

What is much less known is that Summerland’s spiritualism, as officially established one Sunday in mid-May 1889, continues to live on, albeit in a colorful church on the corner of East Figueroa and Garden Streets in downtown Santa Barbara.

The Spiritualist Church of the Comforter, which relocated to its current location after their original Summerland site was claimed 70 years ago by eminent domain (to make way for Interstate 101), quietly continues its tradition of communicating with those who have transcended this earthly plane.

A brief history:  The man credited with founding Summerland’s spiritualist community was Henry Lafayette “HL” Williams of Ohio who served as a major in the Union Army under Ulysses S. Grant (a friend of his) during the Civil War. But it was actually HL’s wife, Sarah, known as “Katie,” who was devoted to the then-burgeoning belief in spiritualism—both a philosophy and religion—and who eventually convinced her once skeptical husband to adopt her beliefs after a séance in which a medium jolted him with a revelation (hitherto known only to him) about his drunkard of a brother.

Thus, when HL, who resided on the corner 0f De la Vina and Sola in Santa Barbara, purchased what was known as Ortega Rancho—1,050 acres along the sea—he resolved to transform that panoramic coastline into a dedicated spiritualist community and invite fellow spiritualists from around the country to join him and his family in regular communion with their dearly departed.

HL christened his new enclave “Summerland,” which, to pagans, wiccans and theosophists means “a place of natural beauty and peace while transitioning between lives”; to spiritualists the word Summerland is synonymous with afterlife.

A book about Summerland’s heritage, The Spirit of the Big Yellow House by Rod Lathim, defines spiritualism as follows: “Spiritualists believe in a spirit or power beyond physical reality. They believe there is a sixth sense that develops in some people, an awareness that enables communication with spirits of the dead.”

Spiritualism had its roots in New York City, circa mid-19th century, though its adherents were ridiculed and ostracized for their nonconventional beliefs. This was why HL and his wife Katie strove to create a sanctuary for fellow believers as the popularity of spiritualism steadily increased (by the end of the century) to 8 million adherents in the United States and Europe.   (The Civil War was a boon to spiritualists due to the grieving over so many dead—often, not properly buried—and, with it, a need for reconciliation with loved ones.)

Sadly, before their spiritualist community was officially launched, Katie died (though one suspects her spirit eternalizes in Summerland…).

Five hundred people, camping out in tents, attended the commune’s grand opening—and thereafter HL handed out plots of land at a pittance to those who wished to settle it, build homes and attend the weekly services and séances at Liberty Hall, which became known as “Spook Hall” among Santa Barbarians, who looked upon their new neighbors as kooks.

When oil was discovered, spirituality turned to commerce and Summerland thrived, its oceanfront entirely consumed by a dozen wharfs supporting over 400 oil drilling rigs. Natural beauty turned ugly as the human soul was again corrupted.

Another problem: Summerland became a magnet for charlatans from around the country bent on exploiting the spiritualism craze for financial gain, parting willing marks from their moulah. (A contractor working under one of Summerland’s prominent remaining houses a few years ago found a “knocker” beneath the floorboard, which translates to spiritualist fraud, as in, hit the floorboard with your foot and it’ll knock on cue…)

Ironically, the same oil that rendered HL fabulously rich was also his downfall (literally) when he ventured out to inspect an abandoned well—and, well, fell into it. His injuries evolved into pneumonia and death. Later, during a séance, HL’s stepson, Worsley, invoked the old man’s spirit. Communicating by automatic writing—the legend goes—HL became angry at this intrusion into his new existence, especially upon learning that there was no real reason other than mere entertainment for summoning him.  (They never again tried to contact their irascible patriarchal benefactor.)

HL’s second wife, after becoming a widow, remarried a San Francisco jeweler named Becker, who took the oil biz to new heights. Until, that is, the construction of Santa Barbara’s yacht harbor altered the breakwater and, after one particularly rough tide, washed all of Summerland’s rigs out to sea, thus ending the oil boom. (Mother Nature fighting back?)

Fast forward about a hundred years. Now a freeway runs through it and spiritualism and oil drilling have given way to a smattering of antique shops, boutiques and eateries, along with the aptly-named Sacred Space, a Buddhist oasis offering peace and quiet and complimentary tea

Meantime, The Spiritualist Church of the Comforter quietly continues its practice of Summerland’s early traditions; their beautiful stained-glass windows feature the international emblem of spiritualism: sunflowers.

“The church received its first charter on January 9, 1891,” states their website.  “Summerland was laughingly referred to as ‘Spookville’ and people usually took the back roads to avoid the odor caused by oil wells. In 1951, we had to find a new home. We are still here and still carrying on.”

Meanwhile, Summerland is left with its ghosts and haunted dwellings, as if its early spiritualist inhabitants, by merit of their beliefs and practices, retained the right to live on forever in the abodes of their former colony.

“I was trying to sleep on the couch in the living room of an old Summerland house I rented,” one seriously spooked person told The Investigator, “and was somewhere in that twilight between sleep and awake—it was the middle of the night—when I heard the pitter-patter of a toddler’s footsteps from about 15 feet away running toward where I lay. Whatever it was stopped right by my head near the arm of the couch, looking down on me.  I froze, petrified.”

This jibes with an account in Mr. Lathim’s book: “As the music played, a cherubic naked child about two and a half feet tall with golden curls… danced around the room and people could hear tiny feet making ‘pitti-pat-pat’ sounds on the floorboards.”

Another couch story: “Woke up in the middle of the night in a house at the top of Summerland and saw figures dressed in late 19th century clothing and they were dancing, 3 or 4 of them. And then a male ghost suddenly and abruptly bent over the couch, like he was the watcher, to prevent witness of what those ghosts were doing. The lady who owned the house said, ‘Oh, yeah—I’ve seen them, they’re in the back room.’ And she described exactly the same phantoms. They’re still there, in that house.”

But most of Summerland’s ghost stories revolve around The Big Yellow House, an iconic landmark which, for several decades, housed a restaurant. A number of persons who worked there have claimed ghostly visions of such vividness they became convinced previous occupants from the spirit world were still present among them.

And not just employees. One customer was at a dinner party in The Big Yellow House and needed to use the restroom. “It was late, near closing time,” The Investigator was told. “Got up to use the restroom and went through a door, ended up in the kitchen. There was no one there. But a voice shouted, ‘You don’t belong in here!’”

He didn’t need to be told twice.

As part of this column The Investigator sought to consult a medium, ideally someone connected to the Spiritualist Church of the Comforter.

Pre-COVID, the church ran something called “Wednesday Messages” for communication between parishioners and church-approved mediums in contact with the spirit world.  But since this has not yet been reinstated, Pastor Pamela Bollinger referred us to a “certified” medium on the east coast who offers a 30-minute session for $60 by phone or Zoom (though Rev. Bollinger likes to point out that everyone is a medium whether they’ve discovered that potential within themselves or not).

This would be my first encounter with a spiritualist and séance-like situation.

One must always approach the unknown with an open mind and a healthy slice of skepticism. In this spirit (pun intended), I was enthusiastic about receiving messages from anyone on the other side who might choose to manifest themselves for the occasion or could be mustered up for me; I had no questions and asked for no one in particular.

A cheery beginning: “Spirit guidance surrounds us with love and light.”

My father is then invoked (fair enough, everyone has one—and a little time spent consulting my blog would confirm his transcendence to the spirit world over a decade ago). “He is feeling fatherly toward you.”  Uh-huh.

“He had a gradual illness but when the end came, he went quickly.” Partly so.

My dad, she said, was feeling awkward about being summoned here and “is not sure what to make of it, but happy to be here, if trying to figure out how it’s possible.”

I should point out, I’m looking for some kind of code, a special word or phrase unknown to the medium that might confirm the genuine presence of my father’s spirit. But no such familiarity materializes.

“He had a faith, not a religion.” True, if somewhat generic without specifics—and could also have been discerned from my blog.

Next some puzzling stuff about our father-son relationship that made little sense to me.

Then: “His father greeted him” [when he passed]. “He was confused, is still figuring it out. He is with a brother—he had a brother, right?” (Ancestry.com.) “In life, they did not live in close proximity.”  True.

“But happy to be together now.”Sweet.

Then another spirit presents itself, bearing no resemblance to anyone I’ve ever known citing circumstances that supposedly involved me but never happened, along with some advice from that fictional spirit: “Stop listening to other people and listen to yourself.”

And then my father’s mother wants a word too, conveying “a softness around her grandkids.”

Problem: My paternal grandmother passed before the advent of grandchildren.

And finally, some parting advice to me from one, two or all three visiting spirits: “Wake up—it’s going to be all right.”

I realize spiritualism ought not be judged by a single medium or experience, but if I had to objectively grade this séance for its verisimilitude I’d have no choice (given the fiction and absence of a familiar specific) but to give it a D—and that’s being charitable because of the positive advice.

But perhaps this is the kind of thing that calls for two-out-of-three; maybe I should visit Madame Rosinka at the end of Stearns Wharf.

Stay tuned, Halloween is just around the corner. (This is not meant to trivialize spiritualism; the traditions of the Celtic/wiccan Samhain and the Day of the Dead as celebrated throughout Latin America are truly sacred as are those near and dear to us who have transcended).

Posted by Robert Eringer at 8:53 AM