Santa Barbara NEWS-PRESS: THE INVESTIGATOR: WE REVEAL THE HOAXERS BEHIND THE "TRUMP-RUSSIA" HOAX 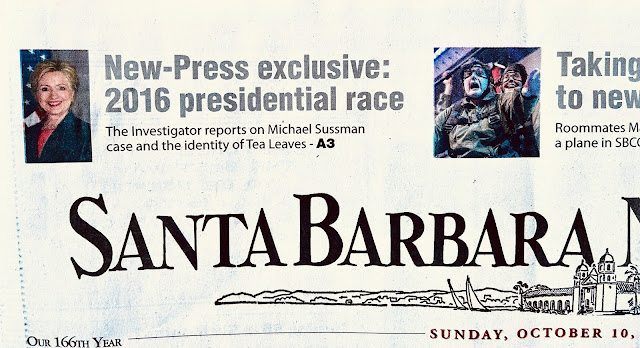 Here is the reason that Special Counsel John Durham’s grand jury indictment of Michael Sussmann on a felony count for lying to the FBI is so very important: Mr. Sussmann was the primary initiator of the hoax that led to the costly Robert Muller Investigation into Donald Trump’s alleged collusion with the Russians—a 22-month investigation that produced mass- media mania but little else of substance.

This is Mr. Durham’s second indictment. His first charged FBI lawyer Kevin Clinesmith with doctoring a document and thus lying to a federal court to secure a FISA application search warrant. Mr. Clinesmith resigned in disgrace and pled guilty.

Mr. Sussmann, it is alleged in the indictment filed September 16th in Washington DC at U.S. District Court, withheld from the FBI his true motivation for proffering “information” to the Bureau:  Simply put, he was secretly acting as a political operative for the Hilary Clinton Campaign, amply evidenced by the billing of his time and expenses to the campaign on this “confidential project” (his own lingo) under the guise of “General Political Advice.”

And if Mr. Sussmann needed more incentive it was this: By his own admission, Hillary Clinton had offered him—should she win the White House—a top job in her administration.

“During the meeting [with FBI General Counsel James Baker] Sussmann lied about the capacity in which he was providing the allegations to the FBI,” reads the 27-page indictment. “Sussmann stated falsely that he was not acting on behalf of any client… conveying the allegations as a good citizen and not as an advocate for any client. His statement was knowingly and intentionally false.”

And then Mr. Sussmann turned around and brazenly invoiced that very FBI meeting to the Clinton Campaign with this description: “Work and communications regarding confidential project.”

A few weeks later, Mr. Sussmann used his meeting with the FBI—and the passing to them of so-called “white papers”—as a platform for generating news stories in the media “purporting,” reads the indictment, “a secret channel between the Trump Organization and a particular Russian bank,” even though, the indictment continues, “the FBI’s investigation of these allegations concluded there was insufficient evidence.”

Why would Mr. Sussmann, who, as a consequence of his indictment has now resigned as a partner at the law firm Perkins Coie… why would he choreograph his propaganda campaign this way?

Simple. Because being able to say the FBI was actively investigating his false information made it a far more credible, compelling story to reporters and editors and thus more likely to be published, which it was. This is how political spin-doctors use the media—and it happens more often than you’d like to believe.

Once the hoaxers accomplished their objective, with an article in Slate, Hillary Clinton was able to weigh in personally with this tweet on 31 October 2016:

Four things you need to know about the Trump Organization’s secret server to communicate with Russian Alfa Bank.

2.     It was set up to communicate privately with a Putin-tied Russian bank called Alfa Bank.

4.     One week later, they created a new server with a different name from the same purpose.

None of this was true; all false. The FBI disproved this claim and the Muller investigation, as hard as it tried, found no evidence to support it.

One of the more interesting aspects of the Michael Sussmann indictment is a reference to “an anonymous computer researcher” who fabricated the data that supposedly connected Mr. Trump to Alfa Bank in Russia, data Mr. Sussmann then passed to the FBI and, soon after, to select media—effectively launching the “Trump-Russia” hoax.

The moniker/code-name of this “technical person” was Tea Leaves.

We can today reveal that the person most likely to have been Tea Leaves is 59-year-old domain name system (DNS) and malware researcher April Dawn Lorenzen, chief data scientist at ZETAlytics LLC, a cyber security company she founded in 2015, located in East Greenwich, Rhode Island.

The results of a private investigation of Tea Leaves provided to The Investigator found that this individual “has remained conveniently tucked away from public scrutiny, creating a 12P Eepsite for the DNS logs and” [we shall add allegedly] “hounding tech bloggers via Tor. Those logs were the basis for the original Trump-Russia-Server hoax and were probably used by the previous [Obama] administration as a pretense to surveil Trump and associates.”

The false files first appeared—around 4-5 October 2016, soon after Mr. Sussmann’s meeting with the FBI—on the website i2p.xyzdns1.i-netco.com, a domain owned by Dissect Cyber Inc., which was hidden at the time from public registries but inadvertently made public last year when Dissect Cyber was listed as a “reseller” of the site.

If true (and we believe it is), this would crown Ms. Lorenzen as Madam Ground Zero in the plot to frame and defame Donald Trump through the use of disinformation.

And all of it bankrolled by the Hillary Clinton Campaign.

It is revealing that, in September 2020, Alfa Bank of Russia subpoenaed Ms. Lorenzen to testify in their massive defamation lawsuit filed four years ago against Fusion GPS, a political opposition research firm on retainer to the Hillary Clinton Campaign, and its principal, Glenn Simpson, who coordinated his company’s activities with (of course) Michael Sussmann. Ms. Lorenzen is fighting the subpoena; a Rhode Island court is scheduled to hear her motion to quash on 18 October.

It remains unclear whether Ms. Lorenzen has yet testified before the Special Counsel’s grand jury and/or if she is a target of Mr. Durham’s ongoing investigation.

A query to the Special Counsel’s Office regarding Ms. Lorenzen brought this reply from Wyn Hornbuckle, deputy director of the Office of Public Affairs at the Department of Justice: “We’ll decline to comment beyond what is contained in the indictment.”

The Investigator responded thus: “If you don’t deny I will consider it a confirmation.”

There was no further response from Mr. Hornbuckle.

Given the length and breadth of the Sussmann indictment, it is clear to Washington DC insiders that additional indictments will be forthcoming.

According to Kash Patel, a former deputy chief of staff for the Defense Department who deposed Michael Sussmann on behalf of Rep. Devin Nunes (R-CA), “The indictment identified 6 to 8 individuals not by name but by title, major players that we deposed. So there’s a larger conspiracy at play here and I think [John Durham] is just getting started.”

And, indeed, just over one week ago Special Counsel Durham issued a new set of subpoenas to Perkins Coie (Mr. Sussmann’s former law firm), whose clients included the Clinton Campaign and the Democratic National Committee and also commissioned what became known as the Steele Dossier, which, in 2016, created a huge furor over Mr. Trump’s so-called “Russia connection.” The Steele Dossier, named after its author, former British intelligence officer Christopher Steele, has since been discredited.

Posted by Robert Eringer at 8:12 AM