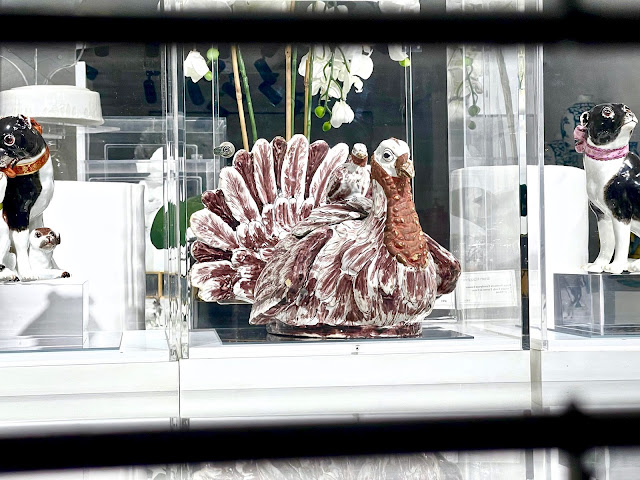 Ralph the Turkey gobbled with his friends in the farmyard where they all lived. They gobbled about who had the prettiest feathers. They gobbled about the quality of birdseed. But mostly they gobbled about how lucky they were not to be chickens. Chickens, all turkeys knew, were cowards. Sure, chickens crossed the street, but nobody ever knew why—and chickens probably didn't know why either. Dumb chickens!  But the main reason these turkeys believed they were lucky not to be chickens was because chickens were bred by humans to be eaten as food. Or they were forced to lay eggs that would be soft-boiled, hard-boiled, poached, fried or scrambled.

A large rooster named Rufus overheard the turkeys gobbling as he sauntered by, pecking corn kernels.  "Ha!" the rooster clucked. "You'll all get yours.  Thanksgiving is coming soon."
"Thanksgiving?" gobbled Ralph the Turkey.
"Uh-huh," Rufus clucked, in a language only fowl could understand. "I can tell by the leaves, cluck-cluck.  They've turned orange and yellow, cluck-cluck, and they're falling from the trees."
"But what is Thanksgiving?" asked Ralph the Turkey.
"When all the leaves have fallen, and the trees are bare," clucked Rufus, "Thanksgiving will be here. And when that happens—ha!—fried fried chicken is not on the menu."
"N-n-no?" gobbled Ralph. "Then what?  Pork chops?"
Rufus clucked with laughter. "Try again, gobble-face."
Something about this rooster's cockiness worried Ralph. "You m-m-mean...?" he gulped.
"Ma-ma-ma… you got it, butterball," clucked Rufus.  "Stuffed and oven-roasted turkey!" And with that, the rooster eructed a triumphant "cock-a-doodle-doo," then moseyed off clucking with delight.
"Did you hear that?" gobbled Ralph, addressing the other galliforms. "What are we gonna do, g-g-guys?"
The turkeys glanced around nervously, shaking their snoods. It was obvious that the trees would be barren of leaves in just a matter of days.
"Let's go see Ted Turkey," said one of Ralph's friends. "He'll know what to do."
Ted was the toughest turkey on the farm. And this old bird was reputed to be the smartest, too.
The young turks surrounded Ted, and Ralph conveyed what Rufus Rooster told them about Thanksgiving.
"R-R-Rufus is trying to scare us, isn't he?" Ralph's eyes begged.
For a long moment, Ted was silent. "No," he gobbled.  "It's true what that rude rooster said. You will all be eaten at Thanksgiving," he said bluntly. "Sorry," he added.
The turkeys were gobble-less. It was Ralph who finally found his gobbler. "B-b-b-b-b-but... but you're still here, Ted."
Ted flapped his wings. "Darn right, I am. I'm too tough to eat."
"Can't we t-t-toughen up like you?" asked Ralph.
"Too late," gobbled Ted. "Thanksgiving is almost here and you birds are tender as can be. The only question is, how those humans will prepare you."
Ralph puzzled this. "P-P-Prepare us? What are the ch-ch-choices?"
"Ch-ch-choices?" Ted squawked with laughter. "You don't get no ch-ch-choices. The humans decide on preparation."
"Preparation into what?" Ralph implored.
"Chances are, oven roast turkey, stuffed with chestnuts," said Ted. "A side of cranberry sauce. Or maybe smoked turkey breast and mashed potatoes covered in a gravy of giblets."
"G-g-giblets?" asked Ralph.
"Internal turkey organs," gobbled Ted. "Liver and kidneys, mostly."
Ralph gasped.
A few of the youngest turkeys started to cry.
"Or could you wind up as turkey salad sandwiches."  Ted cocked his head. "And I even hear they're making turkey pastrami these days. And turkey dogs. And turkey burgers.  And turkey bacon. There's been a swing away from cattle."
"What about t-t-turkey soup?" asked Ralph.
Ted Turkey considered this. "Yep.  I s'pose that's a possibility."
"If I'm going to end up on d-d-dinner," gobbled Ralph.  "I want to be t-t-turkey soup."
Ted gobbled with mirth. "I told you turkeys already, you can't decide nothing. Whether you get roasted, fried, boiled, broiled, barbequed, smoked, micro-waved or souped, you have no say, no way." And with that, Ted flapped off, gobbling gaily about Christmas.
"What's Ca-Ca-Christmas?" asked Ralph.
Ted called back, "You won't need to know."
A few days before Thanksgiving, the trucks arrived.
Word had already gobbled round the farmyard about the meaning of trucks. What trucks meant was this:  It was time to flap your wings and scram. Because trucks were there to take all the tender, terrified turkeys to the abbatoir—a fancy French word for slaughterhouse.
Alas, a high fence surrounded the turkeys, so scramming was not an option.
Rufus Rooster watched in glee as all the turkeys—all except tough Ted Turkey—were rounded up and shepherded aboard the trucks, which drove off in a convoy.
Ralph was squashed in tight with all the other turkeys and no space to even turn around. All he could think of was this:  If he was going to become a meal, he wanted to be turkey soup, even though all the other turkeys laughed when he talked about that.
But the turkeys were all crying, not laughing, when they drew near the abbatoir. The smell of poultry death hung thick and fowl in the air. Ralph tried to hold his breath to stifle his fear.
The truck in which Ralph was riding ground to a halt.  Its back doors swung open and, one by one, each turkey was grabbed and hung by its feet from a metal shackle. These were attached to a moving rail that carried upside-down turkeys to the stunning tank.  Here, the turkeys were dunked headfirst into electrified water that knocked most of them out cold.  The lucky turkeys did not wake up in time for the next step: a throat slashing by a mechanical blade. This allowed the turkeys to bleed to death, “humanely,” before reaching a tank of boiling water.
Fortunately for Ralph, his soul had already departed to turkey heaven by the time he reached the boiling tank. And good thing, too, since processing came next.  And no self-respecting turkey would want to stick around for processing.
Some turkeys were blast-frozen whole. These butterballs would end up stuffed and roasted.
Other turkeys were carved up with a large knife and packaged into parts, including giblets.
Ralph was tossed into a giant cauldron with carrots and celery and spices, left to simmer, then canned and dispatched to a supermarket.
Ralph's wish had come true.  He was turkey soup.