SB NEWS-PRESS: THE INVESTIGATOR: ONWARD TO 2022 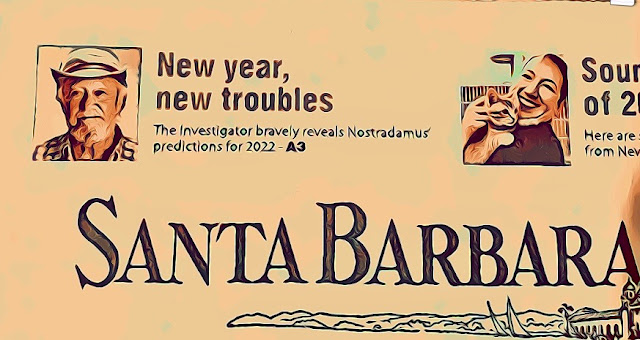 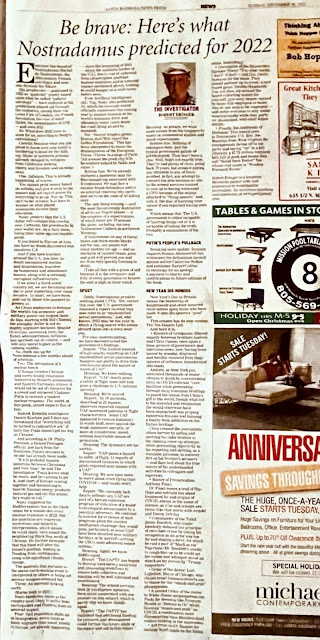 Everyone has heard of Nostradamus (Michel de Nostradame), the 16th century French astrologer and seer who forecast the future. His prophecies—published in 1555 as “quatrain” poetry based upon what he called “judicial astrology,” have endured as his predictions played out through the centuries, among them the Great Fire of London, the French Revolution, the rise of Adolf Hitler, the assassination of JFK—and even 9/11. 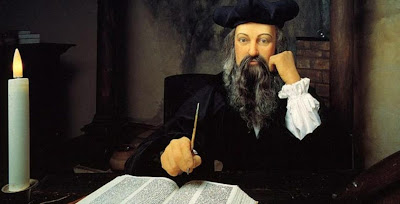 So: what does 2022 have in store for us, according to Nosty’s calculations?

Careful, because what you are about to learn here may instill a hankering to head for the hills, say, Idaho or northern Arizona (already deluged by refugees from California seeking liberty and freedom and un-woke-ness).

One: Inflation. This is already happening, of course.

You cannot print money based on nothing and give it away to the masses and not expect prices for everything to go up. Way up. This isn’t rocket science. You have to wonder on what planet economists receive their education.

Nosty predicts that the US dollar will collapse this coming year. Certainly, the greenbacks in your wallet are, on a daily basis, losing their value against buyable goods.

If you travel to Europe or Asia, you have no doubt discovered that countries in those hemispheres are much more sophisticated and advanced than the USA.

And if you have traveled around the USA, you have no doubt encountered decline and dilapidation, boarded up businesses and abandoned houses, along with a seriously corrupted infrastructure.

If we aren’t a third-world country yet, we are becoming one due to poor leadership over many decades.  In short, we have been sold out by those who purport to govern us.

As China endeavors to become the world’s top economic and military power (we helped them do this, starting with Bill Clinton), the almighty dollar is not so mighty anymore because, despite Orwellian newspeak from the Biden Administration, inflation has spiraled out of control—and will only spiral higher in the coming months.

So, chalk one up for Nostradamus a few months ahead of schedule.

Two: The detonation of a nuclear bomb. 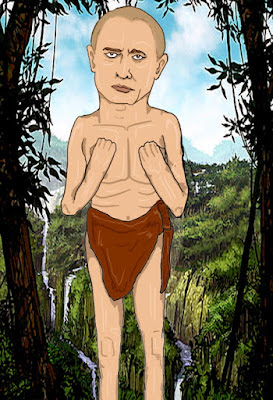 If Russia invades the Ukraine and they meet deadly resistance bolstered by Western armaments and Eastern European armies, it would not be out of character for a cowed and cornered Vladimir Putin to unleash a limited nuclear response. The world, at this point, almost expects this of him. Indeed, Kremlin mouthpiece Dmitry Kiselyov just 5 days ago threatened that “everything will be turned to radioactive ash” if bully-boy Putin doesn’t get his way on Ukraine. And according to Dr. Philip Petersen, former Pentagon official, just back front the frontlines, Putin’s decision to invade has already been made. “It will probably happen sometime between Christmas and New Year,” he told The Investigator. “Putin knows what he wants and he’s aiming to get it. And short of Europe coming together and threatening to boycott Russian energy products [natural gas and oil] this winter, he’s ready to roll.”

Nosty suggested the Mediterranean Sea as the likely venue for a missile-delivered nuclear explosion in 2022. But his quatrains are imprecise, mysterious and subject to interpretation, which means he could easily have meant the neighboring Black Sea, south of Ukraine. He further forecasts that this blast will alter the planet’s position, leading to flooding from earthquakes along with significant climate change.

Nosty identifies Japan as the country most likely to suffer from earthquakes and flooding from an asteroid impact.

Four: Vast population shifts (as in immigration, 7 times as many migrants than usual, mostly in Europe, yet already happening—since the beginning of 2021—along the southern border of the USA), due to war or upheaval from catastrophes (perhaps nuclear explosion and/or asteroid impact mentioned above), leading to world hunger on a scale never before seen.

Five: Artificial Intelligence (AI). Yup, Nosty also predicted AI, which (he forecast) would officially commence this coming year to replace humans as the world’s dominant force and ultimately (some years down the road) bring an end to mankind.

Six: “Sacred temples prime Roman style/Will reject the Goffes Foundation.” This has been interpreted to mean the disintegration of European Union. (Throw in a siege of Paris: “All around the great city/Will be soldiers lodged by fields and cities.”)

Bottom line: We’ve already endured a pandemic (and the fear-mongering associated with it continues); we may face a nuclear bomb detonation and/or an asteroid crashing into earth; and we’re on the cusp of AI taking over.

The only thing missing—and the most threateningly destructive of all to our fragile planet—is the eruption of a super-volcano, of which there are 10 around the globe, including our own Yellowstone Caldera in northwest Wyoming.

If Yellowstone (or any of them) blows, thick smoke blocks out the sun, our planet enters another ice age—and no stockpile of canned beans, guns and gold will prevent you and me from very quickly freezing to death.

(Take all this with a grain of salt because it is the arrogance and folly of every generation to believe the end is nigh on their watch.)

Oddly, Nostradamus predicts nothing about UFOs.  Yet, earlier this year, the U.S. Government (USG) released a report on what they now refer to as “unidentified aerial phenomena” (UAP) and, who knows, 2022 may be the year in which a flying saucer with aliens aboard spins into a town near you. 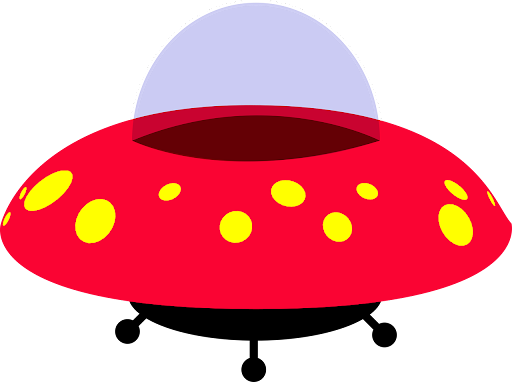 For easy understanding, we have deconstructed USG’s findings:

Report: “The limited amount of high-quality reporting on UAP hampers our ability to draw firm conclusions about the nature or intent of UAP.”

Meaning: We know nothing.

Report: “UAP clearly pose a safety of flight issue and may pose a challenge to U.S. national security.”

Report: “In 18 incidents, described in 21 reports, observers reported unusual UAP movement patterns or flight characteristics.  Some UAP appeared to remain stationary in winds aloft, move against the wind, maneuver abruptly, or move at considerable speed, without discernable means of propulsion.”

Meaning: The dynamics are un-earthly.

Report: “UAP pose a hazard to safety of flight, 11 reports of documented instances in which pilots reported near misses with a UAP.”

Meaning: We now have more to worry about when flying than COVID-19—and masks won’t help.

Report: “We currently lack data to indicate any UAP are part of a foreign collection program or indicative of a major technological advancement by a potential adversary. We continue to monitor for evidence of such programs given the counter intelligence challenge they would pose, particularly as some UAP have been detected near military facilities or by aircraft carrying the USG’s most advanced sensor systems.”

Report: “The UAPTF has begun to develop interagency analytical and processing workflows to ensure both collection and analysis will be well informed and coordinated.”

Meaning: The armed services (and 28 intelligence agencies) have never cooperated with one another on this subject, which is partly why we know diddly-squat.

Report: “The UAPTF has indicated that additional funding for research and development could further the future study of the topics laid out in this report.”

Meaning: As always, we want more money from the taxpayer to waste on nonsensical studies and dumb experiments.

Bottom line: Nothing of substance here, just the typical government gabble of gobbledygook. They don’t have a clue. Well, that’s not exactly true. They’ve had plenty of clues, going back 70 years, but avoided paying any attention to any of them; avoided, in fact, any attempt to connect the dots because no one in the armed services wanted to own up to having witnessed a UFO because of the stigma attached to “flying saucers” and, with it, the fear of harming your career if you reported having seen one.

Which means this:  The U.S. Government is either incapable of figuring things out or it is incapable of telling the truth. Probably a combination of the two.

Breaking news update: Russian oligarch Roman Abramovich has withdrawn his defamation lawsuit against author Catherine Belton and publisher HarperCollins in exchange for an apology, a payment to charity and modifications to future editions of the book.

New Year’s Day in Britain means the bestowing of knighthoods and other assorted royal orders upon those who have made it onto the Queen’s “good” list.

This column has its own version: The Dis-Honors List. And here it is.

Masters of Arrogance:  Shared equally between brothers Andrew and Chris Cuomo, once upon a time, princes of governance and television news; now, having been kissed by scandal, disgraced and forcibly removed from their spheres of influence, transformed into toads.

Andrew, as New York guv, sentenced thousands of senior citizens to death by concentrating them in COVID-infected “care” facilities while pretending through daily television briefings to guard the nation from China’s gift to the world, though what led to his downfall and resignation (he would otherwise have been impeached) in these woke “me-too” times was groping numerous females and blaming a touchy-feely addiction on his Italian heritage.

Chris crossed the journalistic ethics barrier by aiding and abetting his older brother in the ensuing cover-up attempts while pretending objectivity in his reporting and striving, as a wannabe gumshoe, to uncover dirt on his brother’s accusers—and then lied about the true nature of his underhanded activities to colleagues and superiors. 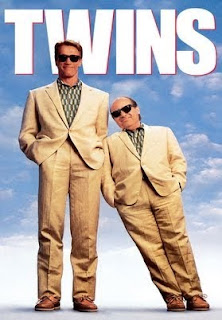 Fauci leaves a trail of flip-flops and outright lies about treatment for and origins of COVID, always in the name of science, as if he and science are twins (like that movie with Arnold and Danny DeVito).

Commander of the Toilet: Jussie Smollett, who single-handedly debased the principle of race-hate crime by taking his occupation as an actor way too far and staging a farce, for which he cast a pair of “black as sin” Nigerians (Smollett’s words) to rough him up so he could act the victim and whimper about an attack on his person by “Trump supporters.”

Order of the Jester: Lori Lightfoot, Mayor of Chicago, who claims retail business owners are to blame for the “smash-and-grab” phenomenon.

A second Order of the Jester to White House spokesperson Jen Psaki for dressing like Princess Mombi in Return to Oz while blaming “smash-and-grab” on COVID, a combination more disconcerting than stainless steel cutlery cooking in the microwave.

Art Prize (not!): Hunter, for cashing in yet again on the Biden name. Schlocking!

Decoration of the Hypocrites: Nancy “You wear masks, I don’t” Pelosi—and Gavin Newsom for same. They should partner up to create a new board game: Double Standards: You roll dice, zip around the board collecting money for yourself, give away money earned by those still employed to those who do not wish to be employed—and order everyone to stay inside wearing masks while they party on, un-masked, with their fellow elitists.

Finally, the Antithesis of Dishonor:  This award goes to Democratic U.S. Senator Joe Manchin from West Virginia for courageously facing off to his party and saying “no” to a bill (literally, a $1.75 trillion taxpayer bill) full of pork and beans they call “Build Back Better” but whose real name is “Weaken Forward Worse.”

Posted by Robert Eringer at 6:33 AM