SB NEWS-PRESS: THE INVESTIGATOR: HERE'S WHY & HOW I STARTED MY CLUBHOUSE ON WHEELS 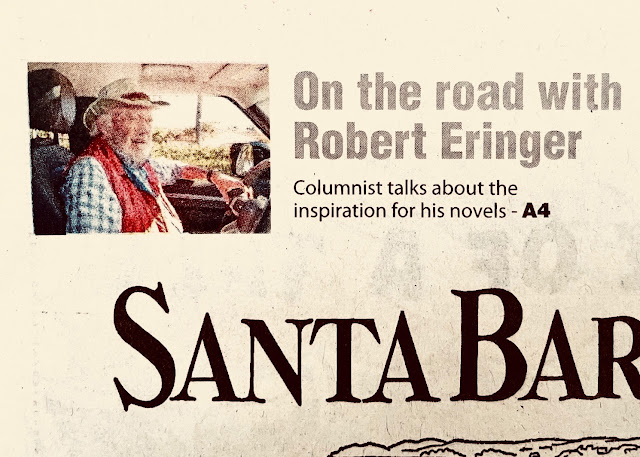 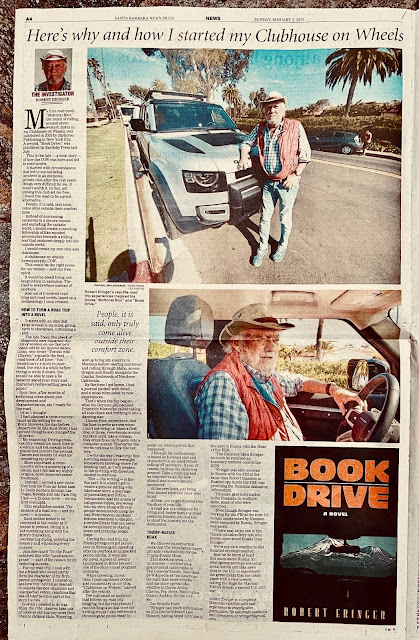 My first road novel, Motional Blur, the result of rolling around seven western states in my Clubhouse on Wheels (COW), was published in 2016 by Skyhorse Publishing in New York City. A second, Book Drive, was published by Bartleby Press last July.

This is the tale—a local story—of how the COW was born and led to road novels.

It started with circumstances that led to me not being involved in an exclusive, private club after the club made things very difficult for me. It wasn’t worth it. In fact, not joining this club set me free. I found the road to be a great alternative.

People, it is said, only truly come alive outside their comfort zone.

Instead of ensconcing ourselves in a secure cocoon and excluding the outside world, I would create a traveling fellowship of like-minded adventurers beneath a rolling roof that ventured deeply into the outside world.

I would create my own club and clubhouse.

A clubhouse on wheels:  Acronymically, COW.

This would be the right home for our money—and our free spirit.

It would be about living, not languishing in exclusion.  The road to everywhere instead of nowhere.

And out of it evolved road trips and roads novels, based on a methodology I soon created.

HOW TO TURN A ROAD TRIP INTO A NOVEL

It starts with an idea that kicks around in my mind, giving birth to characters, cultivating a plot.

The late Thom Steinbeck of Montecito once imparted this bit of wisdom on me that he’d been told by his famous father, John, who wrote Travels with Charley, arguably the best road book of all time: “You should carry a story in your head, live with it a while before trying to write it down.  You should be able to take a lie detector about your story and characters before setting pen to paper.”

Only then, after months of scribbling notes about plot development and characterization, am I ready for the road.

Or so I thought.

I had planned a cross-country jaunt as the setting for my story.  However, the day before departure (in late June 2014), I had second thoughts and changed the itinerary.

My reasoning:  Driving cross-country means too much time in a vehicle and not enough in the places that provide the aromas, flavors and sounds I’d want for peppering my pros.

More important, a cross-country drive is something of a cliché, and I felt that my highly original novel deserved better treatment.

Instead, I carved a new route that took me from home base in Santa Barbara through Las Vegas, Nevada and into Park City, Utah—a 12-hour drive—for the first

This establishes motion.  The essence of a road trip—and my novel—is motion.

Such motion needs to be conveyed to the reader as if he/she is present, sitting in a car motioning along with the story’s characters, overhearing dialog, enjoying the scenery and witnessing every nuance.

Kerouac’s On the Road achieves this with “spontaneous prose”—part of the reason for its enduring success. 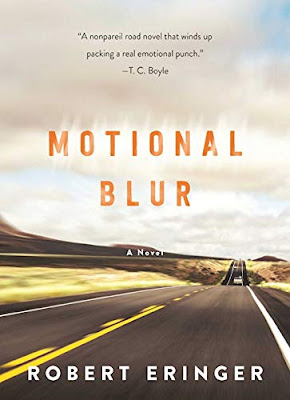 For that road trip, I took with me a friend who would partly form the character of my first-person protagonist.  I wanted to see how this individual reacted to outside-the-box situations and unexpected events, reactions that would later become part of the story I wrote.

Now all I needed to do is enjoy the ride; observe; take lots of notes as our journey wove from Utah to Jackson Hole, Wyoming and up to big sky country in Montana before veering southwest and rolling through Idaho, across Oregon and finally alongside the Coastal Redwoods of northern California.

By the time I got home, I had a journal packed with detail and a mind stimulated by new experiences.

That’s when the fun begins; what the German philosopher Nietzsche called taking all that chaos and birthing it into a dancing star. 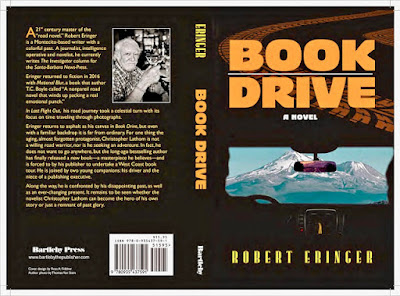 I know, from experience, that the time to write arrives when I can’t not write i.e. when a first line, or three, reverberate around my skull until, like a volcano, they erupt from my fingers onto a computer screen.  Thereafter the words continue to flow like hot lava.

I write the way I road trip:  end a writing session (or overnight somewhere) knowing where I’m heading next, so I will awaken in the morning with direction, excited to continue.

This—the writing—is the fun part; it is where I get to weave genuine setting with fabricated story, a marriage of journalism and fiction.

Restaurants, and the aroma of indigenous dishes, are woven into my story along with real people encountered along the way.

Even random incidents become anecdotal to the plot, a verisimilitude that can never be accomplished by staying home and studying Google maps. 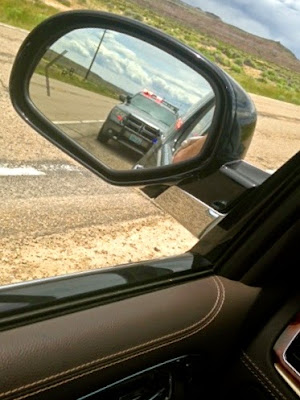 During the road trip, my friend/protagonist got pulled over in Wyoming for speeding after he overtook an unmarked police vehicle.  It went into my novel. 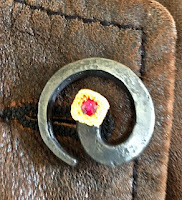 A piece of jewelry I purchased in Boise became one of the story’s most poignant moments.

While traveling, in real time, I post captioned photos and commentary on my blog, Clubhouse on Wheels, named after the vehicle.

I’ve cultivated an audience that follows my road trip blogging, but the real reason I run this blog is so that once my writing erupts I can reference a chronological photo essay to assist my memory of all that happened.

Although my methodology is based on having a plot and characters in my mind before rolling off anywhere, it can, of course, be done the other way around:  Take a road trip and be inspired by all the new stimuli and knowledge you encounter.

At the very least, you bring your senses alive and clear your mind.

At best, you might stumble into the story of your life.

A road trip is a metaphor for living and, better than any other exercise, teaches you that life is about the journey, not the destination. 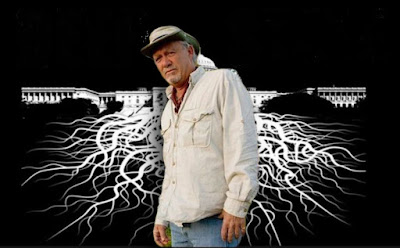 We discovered earlier this week that The Investigator bears ultimate responsibility for the Trump-Russia Hoax.

This shocking news — to us, anyway — arrived via a grammatical catastrophe in The Gateway Pundit, described by Wikipedia as an American far-right fake news website — and has since spread like wildfire to Clause Action Clarion, Pop News, Washington County Auditor, Online Cell, etc.

"Eringer had much information on (CIA traitor Edward Lee) Howard, having dined with him in the past in Russia with the Head of the KGB.

"The Russians liked Eringer so much he received an honorary member card to the KGB.

"Eringer was also involved in Russia with the FBI at the same time Robert Hanssen (a Russian spy inside the FBI) was providing the Russians damaging information.

"Hanssen gave information to the Russians on multiple spies, some of who were executed.

"Even though Eringer was working for the FBI at the time US human assets outed by Hanssen were executed by Russia, Eringer was saved.

"There may be no one in the Russia collusion fairy tale who knows more about Russia than Eringer."

We’re not sure whether to feel insulted or complimented.

And we do know at least this much about Russia: Its intelligence services are using social media and fake news sites in the U.S. to exacerbate the great divide that has taken place with a view toward setting the stage for Vladimir Putin’s dream: a second U.S. civil war.

Robert Eringer is a longtime Montecito resident with vast experience in investigative journalism. He welcomes questions and comments at reringer@gmail.com.

Posted by Robert Eringer at 7:18 AM