SB NEWS-PRESS: THE INVESTIGATOR: TARZAN V. THE DEPUTY OF DEATH 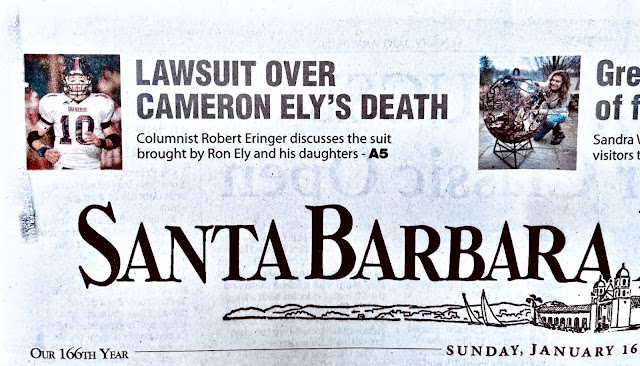 On the evening of Oct. 15, 2019, Santa Barbara County sheriff’s deputies answered a call and rolled up to “Tarzan” star Ron Ely’s home on Mariposa Drive in Hope Ranch after being summoned and dispatched to keep the peace.

According to Mr. Ely’s lawsuit filed in July 2020 against Santa Barbara County and four sheriff’s deputies — Desiree Thome, Jeremy Rogers, Phillip Farley and John Gruttaduario — the deputies “deliberately, purposely, and without warning opened fire on Cameron Ely … then actively denied him any medical assistance for at least 13 minutes.”

Cameron, 30, who was fatally shot by the deputies, was Ron’s son, and prior to shooting Cameron, deputies found Valerie Ely, 62, Ron’s wife, stabbed to death. Cameron, it later transpired, had himself been stabbed — and deputies presumably believed the blood from his wounds belonged to Valerie. Deputies also claimed that Cameron announced that he had a gun and that he lunged forward.

Deputies, who later discovered Cameron was unarmed, believed he was the prime suspect in Valerie’s death

The complaint continues: “Without cause or legal justification, Deputies for the Santa Barbara (County) Sheriff’s Department killed Mr. Ely in contravention of his Fourth Amendment Right to be free from illegal searches and seizures, including having his life forcibly taken from him.”

The plaintiffs, Ron Ely and his two daughters, “seek compensatory and punitive damages from Defendants … in connection with the unjustified use of deadly force and denial of medical care. And for ignoring a pattern and practice of civil rights violations that happened as a result of poorly trained deputies.”

One of the more troubling aspects of this case is the involvement of Deputy Jeremy Rogers, one of the defendants.

During his 16-year career with the Santa Barbara County Sheriff’s Office, Deputy Rogers has been involved in two other fatal shootings.

The first killing was in 2008. Confused circumstances. No police audio-video recorders. A settlement of $650,000 (your money).

The second killing, in 2012. Deputy Rogers tracked down a burglar. Confused circumstances. A video-recorder contradicted the deputy’s story about the suspect aiming his car at him. Eight slugs through the windshield. No medical assistance. A very dead suspect.

Deputy Rogers, during the course of his law enforcement duties, also allegedly caused a fatal car crash. This happened in 2009 when he allegedly took it upon himself to respond to a situation on Highway 101 over which the California Highway Patrol has jurisdiction.

The problem: A wrong-way driver.

Deputy Rogers’ solution: He allegedly ramped slowly onto the 101 without switching on his cruiser’s flashing lights or siren.

Trying to accommodate Deputy Rogers’ cruiser, which was allegedly going too slow, a driver, who had three passengers in his own vehicle, swerved — and drove head-on into the wrong-way driver coming the other way. Two of the passengers died. Two others suffered spinal and head injuries, and one remains confined to a wheelchair.

The ensuing lawsuit for “breach of protocol” and “reckless behavior” was settled for $4.8 million (your money).

The Santa Barbara County District Attorney’s Office has allegedly made no effort to track down other unnamed individuals who were believed to be in the house that evening, in favor of promoting its view that Cameron Ely stabbed his mother (which, to their mind, apparently renders their killing of Cameron at least somewhat justifiable).

“They are taking that stance to cover their butts,” DeWitt Lacy, attorney for Ron Ely and his daughters, Kirsten and Kaitland, told The Investigator. “There is a ton of evidence that Cameron did not do it. We believe there are others involved, others in the house that evening. The D,A,’s office should have tested all of the DNA collected at the scene.

“As it is, their collection was limited and flawed,” Mr. Lacy said. “They don’t want to investigate because it was easier to blame it on Cameron.”

Ron Ely himself may know the answer, but after suffering a stroke several months prior to the incident, he is uncommunicative (he cannot speak), and he suffers from cognitive issues.

“More than anything,” said Mr. Lacy, “the family wants the D.A. to stop telling everyone that Cameron killed his mother.”

A mediation in the Ely case last month failed to produce a settlement, and, consequently, a trial is scheduled to begin on Feb. 22 in the federal District Court in Los Angeles.

“We intend to get justice,” Mr. Lacy told The Investigator. “We are not looking for a settlement. We are full speed ahead to trial.”

The lawsuit does not specify the amount in compensatory and punitive damages sought.

“We want a jury to see and hear the evidence and let them decide the proper amount,” said Mr. Lacy.

Public funds (your money) pay the cost of defending Santa Barbara County and the actions of sheriff’s deputies — and it will also be your money that covers whatever settlement is reached or judgment awarded down the road.

The sheriff’s office replied: “We cannot comment on pending litigation” and referred us to Sheriff Brown’s statement from October 2020, which merely pre-echoed the same: “We will respond to these allegations later, and at the appropriate place, District Court.”

In addition, the Santa Barbara County Sheriff’s Office sent us a link, ostensibly to the District Attorney’s’ “findings.”

In actuality, the link was just a news release the D.A.’s Office issued one day following the incident: “During the search, deputies located the suspect on the property of the homicide. Deputies attempted to gain verbal control of the suspect; however, he presented a threat to them. In defense of the threat posed by the suspect, several deputies fired their service weapons at the suspect, fatally wounding him.”

In other words, a “finding” devoid of investigation.

Meaning derived from the above: Only if this case goes to trial can we hope for any kind of public accountability.

And since Santa Barbara County will doubtless seek to quietly settle the matter (with your money) on the eve of trial to ensure that the killing of Mr. Cameron is never spoken of again, zippo may be all we’ll ever know.

Unless, that is, Ron Ely and his daughters resist settlement and go to trial.

Only then might they find the justice they seek.

And only then will we, as a community, be better served by what a jury, through their verdict, determines the truth to be.

Robert Eringer is a longtime Montecito author with vast experience in investigative journalism. He welcomes questions or comments at reringer@gmail.com.

Posted by Robert Eringer at 8:04 AM