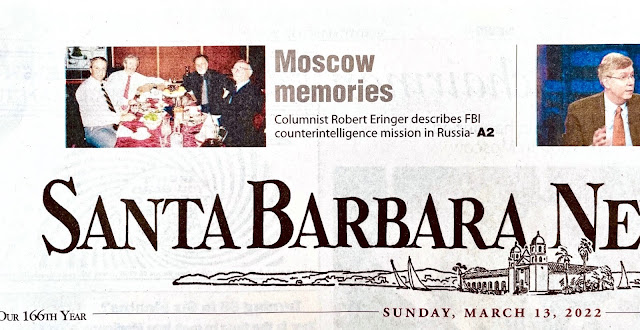 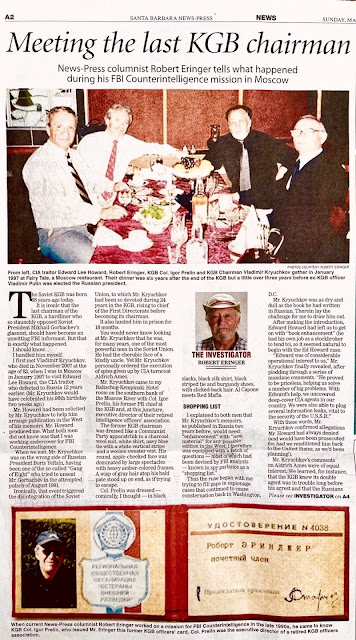 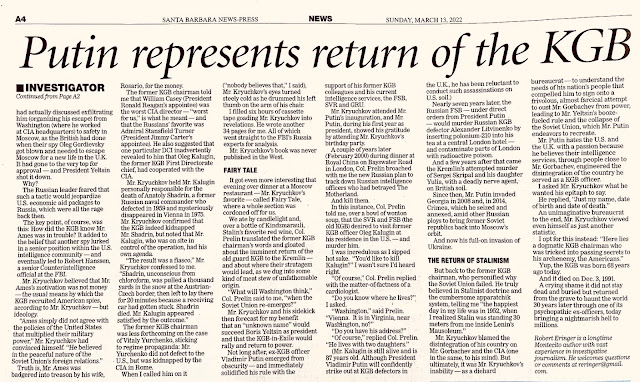 The Soviet KGB was born 68 years ago today.

It is ironic that the last chairman of the KGB, a hardliner who so staunchly opposed Mikhail Gorbachev’s glasnost, should have become an unwitting FBI informant.

But that is exactly what happened.

I should know. I handled him myself.

I first met Vladimir Kryuchkov, who died in November 2007 at the age of 83, when I was in Moscow in January 1997 to visit Edward Lee Howard, the CIA traitor who defected to Russia 12 years earlier. (Kryuchkov would have celebrated his 98th birthday two weeks ago.)

Mr. Howard had been solicited by Mr. Kryuchkov to help him arrange publication in the West of his memoirs. Howard produced me. What both men did not know was that I was working undercover for FBI Counterintelligence.

When we met, Mr. Kryuchkov was on the wrong side of President Boris Yeltsin, having been one of the so-called “Gang of Eight” that tried to unseat Mr. Gorbachev in the attempted putsch of August 1991.

Ironically, that event triggered the disintegration of the Soviet Union, to which Mr. Kryuchkov had been so devoted during 24 years in the KGB, rising to chief of the First Directorate before becoming its chairman.

It also landed him in prison for 18 months.

You would never know looking at Mr. Kryuchkov that he was, for many years, one of the most powerful men in the Soviet Union. He had the cherubic face of a kindly uncle. Yet Mr. Kryuchkov personally ordered the execution of spies given up by CIA turncoat Aldrich Ames.

Mr. Kryuchkov came to my Baltschug-Kempinski Hotel room on the southern bank of the Moscow River with Colonel Igor Prelin, his former PR chief at the KGB and, at this juncture, executive director of their retired intelligence officers’ association.

The former KGB chairman was dressed like a Communist Party apparatchik in a charcoal wool suit, white shirt, navy blue tie with a white vertical stripe and a woolen sweater vest. His round, apple-cheeked face was dominated by large spectacles with heavy amber-colored frames. A wisp of gray hair atop his baldpate stood up on end, as if trying to escape.

I explained to both men that Kryuchkov’s memoirs, as published in Russia two years before, would need “enhancement” with “new material” for any possible edition in the West. I therefore was equipped with a batch of questions—most of which had been devised by FBI analysts—known in spy parlance as a “shopping list.”

Thus, the ruse began with me trying to fill gaps in espionage cases that continued to cause consternation back in Washington D.C.

Mr. Kryuchkov was as dry and dull as the book he had written in Russian. Therein lay the challenge for me to draw him out.

After making the introduction, Edward Howard had left us to get on with “book enhancement” (he had his own job as a stockbroker to tend to), so it seemed natural to begin with the Ed Howard case.

“Edward was of considerable operational interest to us,” Kryuchkov finally revealed, after plodding through a series of mundane comments. “He proved to be priceless, helping us solve a number of big problems. With Edward’s help, we uncovered deep-cover CIA agents in our country. We were also able to plug several information leaks, vital to the security of the USSR.”

With these words, Kryuchkov confirmed allegations Howard had always denied (and would have been prosecuted for had we renditioned him back to the United States, as we’d been planning)!

Mr. Kryuchkov’s comments on Aldrich Ames were of equal interest. We learned, for instance, that the KGB knew Mr. Ames was in trouble long before his arrest and that the Russians had actually discussed exfiltrating him (organizing his escape) from Washington (where he worked at CIA Headquarters) to safety in Moscow, as the British had done when their spy Oleg Gordievsky got blown and needed to escape Moscow for a new life in the UK. It had gone to the very top for approval—and Yeltsin shot it down.

The Russian leader feared that such a tactic would jeopardize U.S. economic aid packages to Russia, which were all the rage back then. The key point, of course, was this: How did the KGB know Ames was in trouble? It added to the belief that another spy lurked in a senior position within the U.S. intelligence community—and eventually led to Robert Hanssen, a senior Counterintelligence official at the FBI.

Mr. Kryuchkov believed that Mr. Ames’s motivation was not money—the usual means by which the KGB recruited American spies, according to Mr. Kryuchkov—but ideology.

“Ames simply did not agree with the policies of the United States that multiplied their military power,” Mr. Kryuchkov had convinced himself. “He believed in the peaceful nature of the Soviet Union’s foreign relations.”

Truth is, Mr. Ames was badgered into treason by his wife, Rosario, for the money.

The former KGB chairman told me that William Casey (Ronald Reagan’s appointee) was the worst CIA director—“worst for us,” is what he meant—and that their favorite was Admiral Stansfield Turner (Jimmy Carter’s appointee). He also suggested that one particular DCI inadvertently revealed to him that Oleg Kalugin, the former KGB First Directorate chief, had cooperated with the CIA.

Mr. Kryuchkov held Mr. Kalugin personally responsible for the death of Anatoly Shadrin, a former Russian naval commander who defected in 1959 and mysteriously disappeared in Vienna in 1975. Mr. Kryuchkov confirmed that the KGB indeed kidnapped Mr. Shadrin, but that Mr. Kalugin, who was on site in control of the operation, had his own agenda. “The result was a fiasco,” Mr. Kryuchkov confessed to me. “Shadrin, unconscious from chloroform, was pulled a thousand yards in the snow at the Austrian-Czech border, then left to lay there for twenty minutes because a receiving car had gotten stuck. Shadrin died. Mr. Kalugin appeared satisfied by the outcome.”

The former KGB chairman was less forthcoming on the case of Vitaly Yurchenko, sticking to regime propaganda: Mr. Yurchenko did not defect to the USA but was kidnapped by the CIA in Rome.

When I called him on it (“nobody believes that,” I said)—Kryuchkov’s eyes turned steely cold as he drummed his left thumb on the arm of his chair.

I filled six hours of cassette tape goading Mr. Kryuchkov into revelations. He wrote another 34 pages for me. All of which went straight to the FBI’s Russia experts for analysis.

Mr. Kryuchkov’s book was never published in the West.

It got even more interesting that evening over dinner, at a restaurant—Mr. Kryuchkov’s favorite—called Fairy Tale, where a whole section was cordoned off for us. 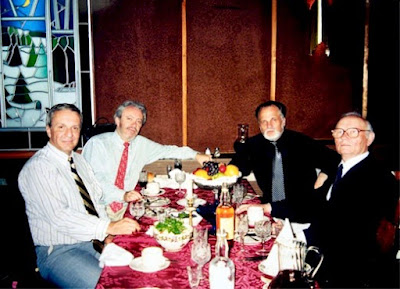 We ate by candlelight and, over a bottle of Kindzmarauli, Stalin’s favorite red wine, Colonel Prelin translated the former KGB chairman’s words, and gloated about the imminent return of the old guard KGB to the Kremlin—and about where their stratagem would lead, as we dug into some kind of meat stew of unfathomable origin.

“What will Washington think,” Colonel Prelin said to me, “when the Soviet Union reemerges?”

Mr. Kryuchkov and his sidekick then forecast for my benefit that an “unknown name” would succeed Boris Yeltsin as President and that the KGB-in-Exile would rally and return to power.

Not long after, ex-KGB officer Vladimir Putin emerged from obscurity—and immediately solidified his rule with the support of his former KGB colleagues and his current intelligence services, the FSB, SVR and GRU.

A couple of years later (February 2000) during dinner at Royal China just off Bayswater Road in London, Colonel Prelin broached with me the New Russian plan to track down Russian intelligence officers that had betrayed The Motherland.

In this instance, Colonel Prelin told me, over a bowl of wonton soup, that the SVR and FSB (the old KGB) desired to visit former KGB officer Oleg Kalugin at his residence in the USA—and murder him.

I was incredulous as I sipped hot sake.  “You’d like to kill Kalugin?” I wasn’t sure I’d heard right.

“Of course,” Colonel Prelin replied with the matter-of-factness of a cardiologist.

“Do you know where he lives?” I asked.

“Washington,” said Prelin.  “Vienna.  It is in Virginia, near Washington, no?”

“Do you have his address?”

“Of course,” replied Prelin.  “He lives with two daughters.”

(Mr. Kalugin is still alive, aged 87. Although Mr. Putin will confidently strike out at KGB defectors in the UK he has been reluctant to conduct such assassinations on U.S. soil.)

And a few years after that came the Kremlin’s attempted murder of Sergei Skripal and his daughter Yulia, with a deadly nerve agent, on British soil.

Since then, Mr. Putin invaded Georgia in 2008 and, in 2014, Crimea which it seized and annexed, amid other Russian ploys to bring former Soviet republics back into Moscow’s orbit.

And now his full-on invasion of Ukraine.

THE RETURN OF STALINISM

But back to the former KGB chairman, who personified why the Soviet Union failed. He truly believed in Stalinist doctrine and the cumbersome apparatchik system, telling me “the happiest day in my life was in 1952, when I realized Stalin was standing thirty meters from me inside Lenin’s Mausoleum.”

Mr. Kryuchkov blamed the disintegration of his country on Mr. Gorbachev and the CIA (one in the same, to his mind). But, ultimately, it was Mr. Kryuchkov’s inability—as a diehard bureaucrat—to understand the needs of its people that compelled him to sign onto a frivolous, almost farcical attempt to oust Mr. Gorbachev from power, leading to Mr. Yeltsin’s booze-fueled rule and the collapse of the Soviet Union, which Mr. Putin endeavors to recreate.

Mr. Putin hates the USA and UK with a passion because he believes their intelligence services, through people close to Mr. Gorbachev, engineered the disintegration of the country he served as a KGB officer.

I asked Mr. Kryuchkov what he wanted his epitaph to say.

He replied, “Just my name, date of birth and date of death.”

An unimaginative bureaucrat to the end, Mr. Kryuchkov viewed even himself as just another statistic.

I opt for this instead: Here lies a dogmatic KGB chairman who was tricked into passing secrets to his archenemy, the Americans.

Yup, the KGB was born 68 years ago today.

A crying shame it did not stay dead and buried but returned from the grave to haunt the world 30 years later through one of its psychopathic ex-officers, today bringing a nightmarish hell to millions.