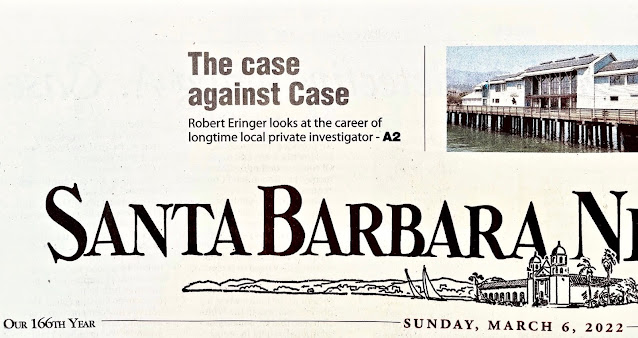 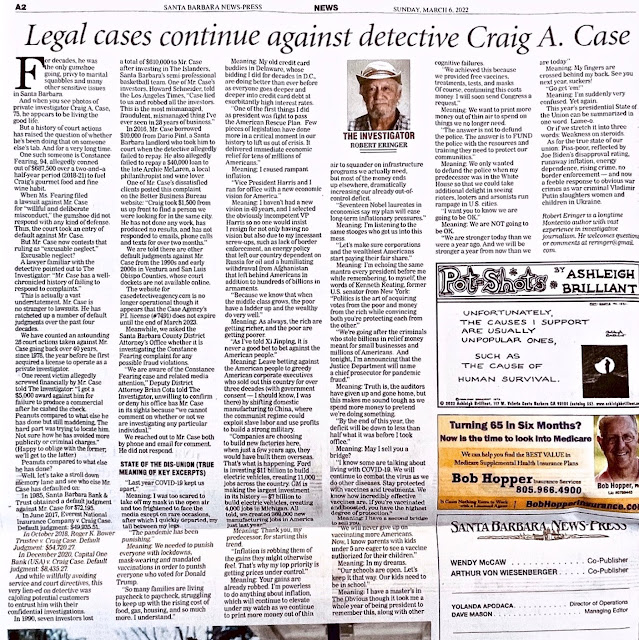 The only thing worse than a corrupt cop is a pilfering private eye.

And, sadly, we have a big fat one right here in town.

For decades, he was the only gumshoe going, privy to marital squabbles and many other sensitive issues in Santa Barbara.

And when you see photos of private investigator Craig A. Case, 75, he appears to be living the good life.

But a history of court actions has raised the question of whether he’s been doing that on someone else’s tab. And for a very long time.

When Ms. Fearing filed a lawsuit against Mr. Case for “willful and deliberate misconduct,” the gumshoe did not respond with any kind of defense. Thus, the court took an entry of default against Mr. Case.

But Mr. Case now contests that ruling as “excusable neglect.”

A lawyer familiar with the detective pointed out to The Investigator: “Mr. Case has a well-chronicled history of failing to respond to complaints.”

This is actually a vast understatement. Mr. Case is no stranger to lawsuits. He has ratcheted up a number of default judgments over the past four decades.

We have counted an astounding 26 court actions taken against Mr. Case going back over 40 years, since 1978, the year before he first acquired a license to operate as a private investigator.

One recent victim allegedly screwed financially by Mr. Case told The Investigator: “I got a $5,000 award against him for failure to produce a commercial after he cashed the check. Peanuts compared to what else he has done but still maddening. The hard part was trying to locate him. Not sure how he has avoided more publicity or criminal charges.” (Happy to oblige with the former; we’ll get to the latter.)

Peanuts compared to what else he has done?

Well, let’s take a stroll down memory lane and see who else Mr. Case has defaulted on:

And while willfully avoiding service and court directives, this very lien-ed on detective was cajoling potential customers to entrust him with their confidential investigations.

In 1990, seven investors lost a total of $610,000 to Mr. Case after investing in The Islanders, Santa Barbara’s semi-professional basketball team. One of Mr. Case’s investors, Howard Schneider, told the Los Angeles Times, “Case lied to us and robbed all the investors. This is the most mismanaged, fraudulent thing I’ve ever seen in 28 years of business.”

Apparently, no amount is too small for Mr. Case to renege on. One of Mr. Case’s dissatisfied clients posted this complaint on the Better Business Bureau website: “Craig took $1500 from us up front to find a person we were looking for in the same city. He has not done any work, has produced no results, and has not responded to emails, phone calls and texts for over two months.”

We are told there are other default judgments against Mr. Case from the 1990s and early 2000s in Ventura and San Luis Obispo Counties, whose court dockets are not available online.

The website for casedetectiveagency.com is no longer operational though it appears that the Case Agency’s P.I. license (#7491) does not expire until the end of March 2023.

Meanwhile, we understand from sources that the Santa Barbara DA’s Office is investigating the Constance Fearing complaint with a view toward criminally prosecuting Craig Case for fraud.

We reached out to the DA’s Office to ensure they are on it.

“We are aware of the Constance Fearing case and related media attention,” Deputy District Attorney Brian Cota told The Investigator, unwilling to confirm or deny they have Mr. Case in their sights because “we cannot comment on whether or not we are investigating any particular individual.”

We reached out to Mr. Case both by phone and email for comment. He did not respond.

STATE OF THE DIS-UNION (TRUE MEANING OF KEY EXCERPTS)

Meaning: I was too scared to take off my mask in the open air and too frightened to face the media except on rare occasions, after which I quickly departed, my tail between my legs.

“The pandemic has been punishing.”

“So many families are living paycheck to paycheck, struggling to keep up with the rising cost of food, gas, housing, and so much more. I understand.”

Meaning: My old credit card buddies in Delaware, whose bidding I did for decades in D.C., are doing better than ever before as everyone goes deeper and deeper into credit card debt at exorbitantly high interest rates.

“One of the first things I did as president was fight to pass the American Rescue Plan.  Few pieces of legislation have done more in a critical moment in our history to lift us out of crisis. It delivered immediate economic relief for tens of millions of Americans.”

“Vice President Harris and I ran for office with a new economic vision for America.”

Meaning: I haven’t had a new vision in 40 years, and I selected the obviously incompetent VP Harris so no one would insist I resign for not only having no vision but also due to my incessant screw-ups, such as lack of border enforcement, an energy policy that left our country dependent on Russia for oil and a humiliating withdrawal from Afghanistan that left behind Americans in addition to hundreds of billions in armaments.

“Because we know that when the middle class grows, the poor have a ladder up and the wealthy do very well.”

“As I’ve told Xi Jinping, it is never a good bet to bet against the American people.”

Meaning: Leave betting against the American people to greedy American corporate executives who sold out this country for over three decades (with government consent — I should know, I was there) by shifting domestic manufacturing to China, where the communist regime could exploit slave labor and use profits to build a strong military.

“Companies are choosing to build new factories here, when just a few years ago, they would have built them overseas. That’s what is happening. Ford is investing $11 billion to build electric vehicles, creating 11,000 jobs across the country. GM is making the largest investment in its history — $7 billion to build electric vehicles, creating 4,000 jobs in Michigan. All told, we created 369,000 new manufacturing jobs in America just last year.”

Meaning: Thank you, my predecessor, for starting this trend.

“Inflation is robbing them of the gains they might otherwise feel. That’s why my top priority is getting prices under control.”

Meaning: Your gains are already robbed. I’m powerless to do anything about inflation, which will continue to elevate under my watch as we continue to print more money out of thin air to squander on infrastructure programs we actually need, but most of the money ends up elsewhere, dramatically increasing our already out-of-control deficit.

Meaning: I’m listening to the same stooges who got us into this mess.

“Let’s make sure corporations and the wealthiest Americans start paying their fair share.”

Meaning: I’m echoing the mantra every president before me while remembering, to myself, the words of Kenneth Keating, former U.S. senator from New York: “Politics is the art of acquiring votes from the poor and money from the rich while convincing both you’re protecting each from the other.”

“We’re going after the criminals who stole billions in relief money meant for small businesses and millions of Americans.  And tonight, I’m announcing that the Justice Department will name a chief prosecutor for pandemic fraud.”

Meaning: Truth is, the auditors have given up and gone home, but this makes me sound tough as we spend more money to pretend we’re doing something.

“By the end of this year, the deficit will be down to less than half what it was before I took office.”

Meaning: May I sell you a bridge?

“I know some are talking about living with COVID-19. We will continue to combat the virus as we do other diseases. Stay protected with vaccines and treatments. We know how incredibly effective vaccines are. If you’re vaccinated and boosted, you have the highest degree of protection.”

Meaning: I have a second bridge to sell you.

“We will never give up on vaccinating more Americans. Now, I know parents with kids under 5 are eager to see a vaccine authorized for their children.”

Meaning: In my dreams.

“Our schools are open. Let’s keep it that way. Our kids need to be in school.”

Meaning: I have a master’s in The Obvious though it took me a whole year of being president to remember this, along with other cognitive failures.

“We achieved this because we provided free vaccines, treatments, tests, and masks. Of course, continuing this costs money. I will soon send Congress a request.”

Meaning: We want to print more money out of thin air to spend on things we no longer need.

Meaning: We only wanted to defund the police when my predecessor was in the White House so that we could take additional delight in seeing rioters, looters and arsonists run rampage in U.S. cities.

Meaning: We are NOT going to be okay.

“We are stronger today than we were a year ago. And we will be stronger a year from now than we are today.”

Meaning: My fingers are crossed behind my back. See you next year, suckers!

This year’s presidential State of the Union can be summarized in one word: Lame-o.

Or if we stretch it into three words: Weakness on steroids.

Robert Eringer is a longtime Montecito author with vast experience in investigative journalism. He welcomes questions or comments at reringer@gmail.com.