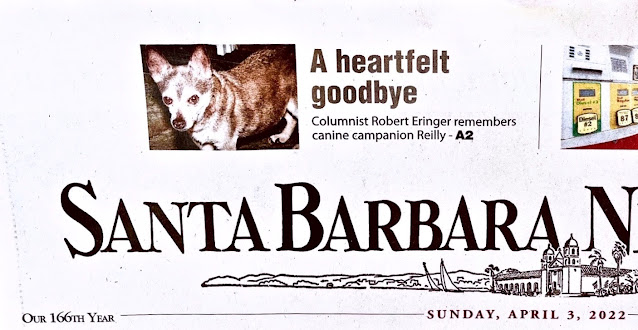 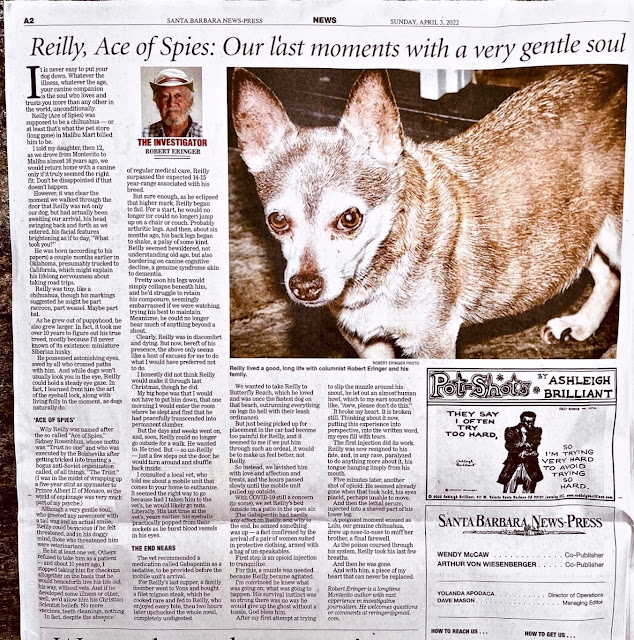 It is never easy to put your dog down. Whatever the illness, whatever age, your canine companion is the soul who loves and trusts you more than any other in the world, unconditionally.

Lock your spouse (or some other human being) and your dog in a closet overnight. When you let them out next morning, who’s happy to see you?

Reilly (Ace of Spies) was supposed to be a chihuahua—or at least that’s what the pet store (long gone) in Malibu Mart billed him to be.

I told my daughter, then 12, as we drove from Montecito to Malibu almost sixteen years ago, we would return home with a canine only if it truly seemed the right fit, don’t be disappointed if that doesn’t happen.

However, it was clear the moment we walked through the door that Reilly was not only our dog, but had actually been awaiting our arrival, his head swinging back and forth as we entered, his facial features brightening as if to say, “What took you?”

He was born (according to his papers) a couple months earlier in Oklahoma, presumably trucked to California, which might explain his lifelong nervousness about taking road trips.

Reilly was tiny, like a chihuahua, though his markings suggested he might be part raccoon, part weasel, maybe part bat.

As he grew out of puppyhood, he also grew larger. In fact, it took me over ten years to figure out his true breed, mostly because I’d never known of its existence: Miniature Siberian Husky.

He possessed astonishing eyes, awed by all who crossed paths with him.  And, while dogs won’t usually look you in the eye, Reilly could hold a steady eye gaze. In fact, I learned from him the art of the eyeball lock, along with living fully in the moment, as dogs naturally do.

Wily Reilly was named after the so called “Ace of Spies,” Sidney Rosenblum, whose motto was “Trust No One” and who was executed by the Bolsheviks after getting tricked into trusting a bogus anti-Soviet organization called, of all things, “The Trust.”

(I was in the midst of wrapping up a five-year stint as spymaster to Prince Albert II of Monaco, so the world of espionage was very much part of my psyche.)

Although a very gentle soul, who greeted any newcomer with a tail wag and an actual smile, Reilly could be vicious if he felt threatened and, in his doggy mind, those who threatened him were veterinarians. He bit at least one, others refused to take him as a patient—and about ten years ago I stopped taking him for checkups altogether on the basis that he would henceforth live his life out his way, without vets—and if he developed some illness or other, well, we’d allow him his Christian Scientist beliefs. No more vaccines, teeth cleanings, nothing.

In fact, despite the absence of regular medical care, Reilly surpassed the expected 14-15 year-range associated with his breed.

But, sure enough, as he eclipsed that higher mark, Reilly began to fail. For a start, he would no longer (or could no longer) jump up on a chair or couch. Probably arthritic legs. And then, about six months ago, his back legs began to shake, a palsy of some kind. Reilly seemed bewildered, not understanding old age, but also bordering on canine cognitive decline, a genuine syndrome akin to dementia.  Pretty soon his legs would simply collapse beneath him and he’d struggle to remain his composure, seemingly embarrassed if we were watching, trying his best to maintain. Meantime, he could no longer hear much of anything beyond a shout.

Clearly, Reilly was in discomfort and dying. But now, bereft of his presence, the above only seems like a host of excuses for me to do what I would have preferred not to do.

I honestly did not think Reilly would make it through last Christmas, though he did.

My big hope was that I would not have to put him down; that one morning I would enter the room where he slept and find that he had peacefully transcended into permanent slumber.

But the days and weeks went on and, soon, Reilly could no longer go outside for a walk.  He wanted to.  He tried. But—so un-Reilly—just a few steps out the door, he would turn around and shuffle back inside.

I consulted a local vet who told me about a mobile unit that comes to your home to euthanize. It seemed the right way to go because had I taken him to the vet’s, he would likely go nuts. Literally. His last time at the vet’s, years earlier, his eyeballs practically popped from their sockets as he burst blood vessels in his eyes.

The vet recommended a medication called Gabapentin as a sedative, to be provided before the mobile unit’s arrival.

For his last supper, a family member went to Vons and bought a filet mignon steak, which he cooked rare and fed to Reilly, who enjoyed every bite—then two hours later upchucked the whole meal, completely undigested.

We wanted to take Reilly to Butterfly, which he loved and was once the fastest dog on that beach, outrunning everything on legs (to hell with their leash ordinance).

But just being picked up for placement in the car had become too painful for Reilly and it seemed to me if we put him through such an ordeal it would be to make us feel better, not Reilly.

So instead, we lavished him with love and affection and treats and the hours passed slowly until the mobile unit pulled up outside.

With Covid still a concern (to some), we set Reilly’s bed outside on a patio in the open air.

Reilly, wily to the end, sensed something was up (the Gabapentin had hardly any effect on him), a fact confirmed by the arrival of a pair of women suited in protective clothing, armed with a bag of un-speakables.

First step is an opioid injection to tranquilize.

For this a muzzle was needed because Reilly became agitated.

I’m convinced he knew what was going on; what was going to happen. His survival instinct was so strong there was no way he would give up the ghost without a tussle, God bless him.

After my first attempt at trying to slip the muzzle around his snout, he let out an almost human howl, which to my ears sounded like, “Aww, please don’t do this.”

It broke my heart.  It is broken still. Thinking about it now, putting this experience into perspective, into the written word, my eyes fill with tears.

]The first injection did its work. Reilly was now resigned to his fate and, in any case, paralyzed to do anything more about it, his tongue hanging limply from his mouth.

Five minutes later, another hot of opioid. He seemed already gone when that took hold, his eyes placid, perhaps unable to move.

And then the lethal serum, injected into a shaved part of his lower leg.

A poignant moment ensued as Lulu, our genuine chihuahua, drew up nose-to-nose to sniff her brother, a final farewell.

As the poison coursed through his system, Reilly took his last few breaths.

And then he was gone.

And with him, a piece of my heart that can never be replaced.