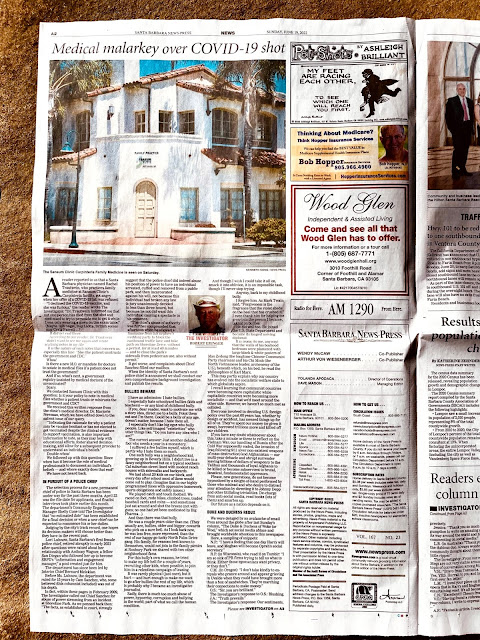 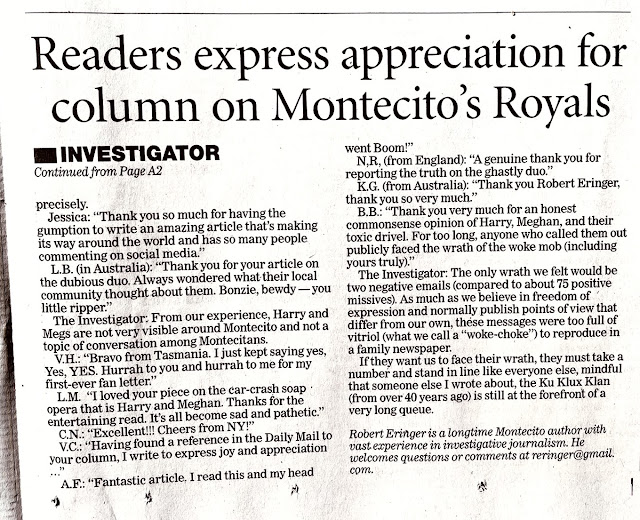 A reader reported to us that a Santa Barbara physician named Rachel Trautwein, who practices family medicine at Sansum Clinic’s Carpinteria facility, got angry when her offer of a Covid jab was refused.

“I declined the Covid vaccine, and she was furious,” our reader wrote us. “Dr. Trautwein informed me that not one person has died from the shot and continued to try to persuade me to get it while I was only wearing a gown on the exam table.” (Maybe Bob Saget, Ivan Reitman, and Ray Liotta, British soccer star Craig Farrell…?)

It did not end there.

According to our reader, Dr. Trautwein “didn’t want to see me again and wrote scathing notes in my file.”

It is the nature of such notes that concern us, especially this line: “She [the patient] mistrusts the government and CDC.”

Is there a new M.O. or mandate for doctors to notate in medical files if a patient does

not trust the government?

And if so, what’s next, a government registry (assisted by medical doctors) of

We contacted Sansum Clinic with this question: Is it your policy to note in medical files whether a patient trusts or mistrusts the government and CDC?

We received this written response from the clinic’s Medical Director, Dr. Marjorie Newman, which we have edited down to the salient issue of our query: “Indicating the rationale for why a patient may be vaccine hesitant or has not elected to get vaccinated despite the clinical evidence to support vaccination, is also important information to note, as they may help with educational efforts, foster shared decision making, and allow for a subsequent provider to understand an individual’s beliefs.”

We followed up with this question: Since when has it become the role of medical professionals to document an individual’s beliefs—and where exactly does that end?

We have not heard back.

IN PURSUIT OF A POLICE CHIEF

The selection process for a new chief of police in Santa Barbara has been underway for the past three months. April 22nd was the file date for applicants and finalist interviews took place earlier this month. The department’s Community Engagement Manager Shelly Cone told The Investigator that “no estimated date” has been established for a final decision or when a new chief can be expected to commence his or her duties.

Judging by the City’s track record, one hopes its decision-makers will choose better than they have in the recent past.

Lori Luhnow, SB’s first female police chief, retired abruptly in early 2021 after questions were raised about her relationship with Anthony Wagner, a fellow San Diegan who followed her up to become SBPD’s “Information & Engagement Manager,” a post created just for him. The department has since been led by Interim Chief Bernard Melekian.

Before Ms. Luhnow, the department was ruled for 15 years by Cam Sanchez, who, some believed (this columnist included) was out of his depth.

In fact, within these pages in February 2009, The Investigator called out Mr. Sanchez for abuse of power stemming from an incident at Shoreline Park. As we penned back then: “The facts, as established in court, strongly suggest that the police chief did indeed abuse his position  of power to have an individual arrested, cuffed and removed from a public park, and then incarcerated against his will, not because this individual had broken any law (a jury unanimously decided in less than three hours), but because he not did want this individual causing a spectacle in his presence.

“The chief’s abuse of authority was further compounded that afternoon when he allowed a limousine from his nephew’s wedding party to block the eastbound traffic lane and bike path on Shoreline Drive, without a permit, for at least 40 minutes—and to close the park’s sidewalk from pedestrian use, also without permit.”

It got worse, and complaints about Chief Sanchez filled our mailbox.

When the identity of Santa Barbara’s next police chief is announced we shall conduct our own comprehensive background investigation and publish the results.

I have an admission: I hate bullies.

I especially hate schoolyard bullies (kids and teachers)—or any kind of childhood bully.

If you, dear reader, want to motivate me with a story idea, direct me to a bully. Point them out and I’m there. Could be a bully of any age, doesn’t matter, because I hate them all.

The correct answer: Just another deluded fool who needs a year in a monastery.

I suffered a few bullies myself, which is partly why I hate them so much.

One such bully was a neighborhood kid, growing up in Beverly Hills. I didn’t live in a fancy neighborhood but on a typical southern Cal suburban street lined with modest ranch houses with sidewalks and backyards.

We had about 20 kids on our block and every day after school most of them would come out to play. (Imagine THAT in our highly programmed times with oppressive homework, sports obligations, and safety issues.)

We played catch, touch football, ditch; we raced on foot, rode bikes, climbed trees, traded baseball cards and coins—and sometimes just sat around and shot the breeze (not with guns; no one had yet been medicated by Big Pharma…).

And then there was that bully.

He was a couple years older than me (they usually are, bullies, older and bigger; cowards who pick on a sure bet). As I look back now, he was less free, more repressed, than the rest of our happy-go-lucky North Palm Drive gang. His family, for reasons best known to themselves, would not join in the family picnics at Roxbury Park we shared with two other neighborhood fams.

For this bully’s own reasons, he tried to make my life hell for a couple of years, recruiting other kids, when possible, to join him in a relentless campaign of teasing.

It was rarely physical (just once) but it hurt—and hurt enough to make me want to go after bullies the rest of my life, which is probably why I became an investigative journalist.

Sadly, there is much too much abuse of power, hypocrisy, corruption and bullying in the world; part of what we call the human condition.

And though I wish I could take it all on, smack it into oblivion, it is an impossible task, though I’ll never stop trying.

Anyway, back to my childhood bully.

I forgive him. As Mark Twain said, “Forgiveness is the fragrance that the violet sheds on the heel that has crushed it.” I even thank him for helping me grow into the person I became, taking on bullies.

He did well too; joined the U.S. State Department and became its longest serving diplomat. It is ironic (to me, anyway) that the walls of his boyhood bedroom were plastered with large black & white posters of Mao Zedong (the longtime Red Chinese Communist Party chairman) and Ho Chi Minh (the North Vietnamese leader, archenemy of the USA), beneath which, on his bed, he read the philosophies of Karl Marx while chomping on his toenails (we kid you not).

This may partly explain why our country has evolved into the socialistic welfare state to which globalists aspire.

Everyone involved in deciding US foreign policy over the past 60 years has, whether by design or accident, screwed us all. They’ve spent our money (or given it away), borrowed trillions more and killed off our children.

If you have any doubt whatsoever about this, take a minute or three to reflect on the Vietnam War, our handling of Russia after the Cold War supposedly ended, the invasion of Iraq following 9/11 (over non-existent weapons of mass destruction), and Afghanistan, our multi-year debacle and abrupt surrender leaving billions of dollars of weaponry to the Taliban and thousands of loyal Afghanis to be killed or become subservient to brutal, fanatical, fundamentalist oppressors.

Please, new generations, do not become hypnotized by a sleight-of-hand performed by those who mislead and who desire to distract your attention by directing it to Johnny Depp and other titillating trivialities. De-charge from anti-social media, read books (lots of them) and smarten up.

Our future as a nation depends on it.

We were deluged by an avalanche of email from around the globe after last Sunday’s column, The Duke & Duchess of Woke (or Woe), which set social media ablaze and brought worldwide attention to this newspaper.

Here, a sampling of snippets:

NP: “I have a feeling that one day Harry will leave, and Meghan will become Oprah’s social secretary.”

RP (in Wisconsin), who read it on Tumblr: “I am so sick of PR firms trying to tell us what to think. Either those egomaniacs want privacy, or they don’t.”

CM (in Oregon): “I don’t take kindly to ex-royals who prance around and appear grieving in Uvalde when they could have brought more than a box of sandwiches. They’re marching their connections to make money.”

Jessica: “Thank you so much for having the gumption to write an amazing article that’s making its way around the world and has so many people commenting on social media.”

LB (in Australia): “Thank you for your article on the dubious duo. Always wondered what their local community thought about them. Bonzie, bewdy—you little ripper.”

Comment: From our experience, Harry and Megs are not very visible around Montecito and not a topic of conversation among Montecitans.

VH: “Bravo from Tasmania. I just kept saying yes, Yes, YES. Hurrah to you and hurrah to me for my first ever fan letter.”

LM: “I loved your piece on the car-crash soap opera that is Harry and Meghan. Thanks for the entertaining read. It’s all become sad and pathetic.”

VC: “Having found a reference in the Daily Mail to your column, I write to express joy and appreciation…”

AF: “Fantastic article. I read this and my head went Boom!”

NR (from England): “A genuine thank you for reporting the truth on the ghastly duo.”

KG (from Australia): “Thank you Robert Eringer, thank you so very much.”

BB: “Thank you very much for an honest commonsense opinion of Harry, Meghan, and their toxic drivel. For too long, anyone who called them out publicly faced the wrath of the woke mob (including yours truly).”

Our comment: The only wrath we felt would be two negative emails (compared to about 75 positive missives). As much as we believe in freedom of expression and normally publish points of view that differ from our own, these messages were too full of vitriol (what we call a “woke-choke”) to reproduce in a family newspaper.  If they want us to face their wrath, they must take a number and stand in line like everyone else, mindful that the Ku Klux Klan (from over 40 years ago) is still at the forefront of a very long queue.

Posted by Robert Eringer at 8:50 AM