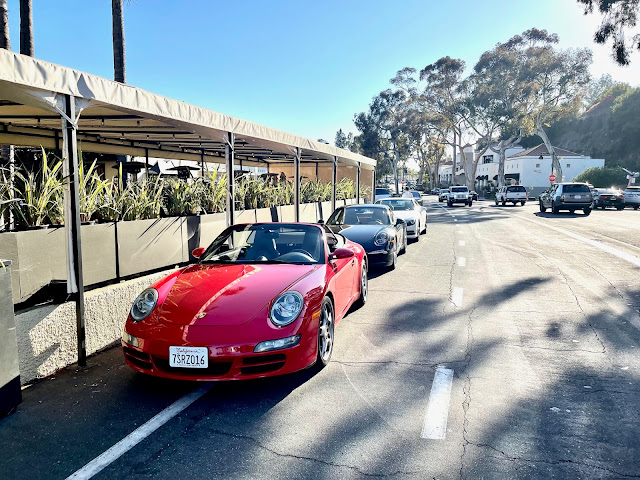 With Covid-era restaurant parklets recently extended by Santa Barbara City Council through 2023, no fewer than 25 merchants along Coast Village Road (CVR) are protesting about the parklet situation along their swanky stretch —along with what they claim are violations that go unenforced by the city.

In fact, these shopkeepers and those who staff professional offices in Montecito’s lower village are so incensed by the parklets they have signed a letter sent this morning to Mayor Randy Rowse, all City Council Members and City Attorney Ariel Calonne, outlining the trouble caused them due to what they believe is local restaurant owner overreach for financial gain to the detriment of their own businesses and the rest of the community.

These signatories are demanding that parklets be removed—or at the very least that restaurant management be ordered, in the interests of public safety and fairness, to comply with guidelines set down by the city in addition to  compliance with parking code.

Everyone who resides in, or visits Montecito knows that public parking has become a serious issue along CVR. It is bad enough, these merchants say, that parklets take up almost 19 percent of all spaces. (That figure on the 1600 block of CVR rises, disproportionately, to 23 percent.)

But this problem is compounded by extra seating space the parklets provide to restaurants, not only raising the number of customers who dine at peak hours but necessitating additional staff without any regard to the obvious need for increased parking space to accommodate a heavier load of many more patrons and employees.

These merchants pointed out us that if someone wants to open a new restaurant on Coast Village Road, the city’s first question is always, do you have enough parking?

If you do not, the city demands that you create some—or no bueno, forget about a restaurant license, amigo.

The city’s formula on this is straightforward: One parking space for every three seats.

Example: When Honor Bar set up shop on CVR seven years ago they needed to ensure underground parking—and, at some major expense, they did so.

That said, foremost on the list of CVR merchant grievances is the parklet sizing requirement, the dimensions of which are stated on the city’s website (Ordinance No. 5944).

Says one disgruntled merchant, “Lucky's appears to be the most oversized and most questionable.  Guidelines stipulate a maximum build out of six feet from the curb. Theirs is 21 feet.”

(However, as you read on, you will discover, as we did, that special conditions apply to CVR.)

The merchant continues: “Public safety is a major issue. Alleys, bike lanes, sidewalks, and driveways are being blocked. Cars are double- and triple-parked daily.”

Downtown Manager Brian Bosse promptly responded to our query by pointing out that the six-feet requirement applies to areas that have parallel parking. “On Coast Village Road,” he writes, “parklets are allowed to be built a bit deeper because the angled parking spaces create a wider parking lane than a parallel-type parking space.”

Countered a CVR merchant affected by the parklet in front of Lucky’s, “This would still place them in violation as their build-out is eight-feet beyond the angled parking space, equating to 624 square feet.”

We conveyed their calculation to Mr. Bosse. He conducted a brief site inspection and changed his tune. “The intent across the city is to keep the parklet within the parking lane and out of travel lanes and bike lanes.  None of those businesses had expanded outdoor business areas that extended beyond the parking area into the travel path or bike path."

In other words, diagonal parking-PLUS. Or maybe it’s circle-the-wagons time among city officials.

In fact, for many weeks Lucky’s has contrived a parking zone along the street perimeter of its parklet that, indeed, not only obstructs in totality the bike lane but partly obstructs the road, endangering the lives of bicyclists and motorists.

One of the unlucky neighbors of Lucky’s tells us, “These restaurant owners should be ashamed of themselves for their overreach. When parklets were needed, we supported them, but now that patrons can dine indoors there is no longer any basis for their continuance—at least not on Coast Village Road, which has serious parking issues. And through the end of 2023? We ALL suffered during Covid. It is unfair that restaurants be given special treatment that impacts on our own ability to conduct business. There is simply no justification.”

In other words, restaurants with parklets are receiving rent-free space from the city and minting money at the expense of other merchants.

And there are other issues:

One merchant points out the environmental impact in the area as cars are forced to circle again and again, leaving a larger carbon footprint, in search of that ever-elusive parking space.

There is also concern about public sanitation. Despite a larger number of patrons, no additional washroom facilities have been added. 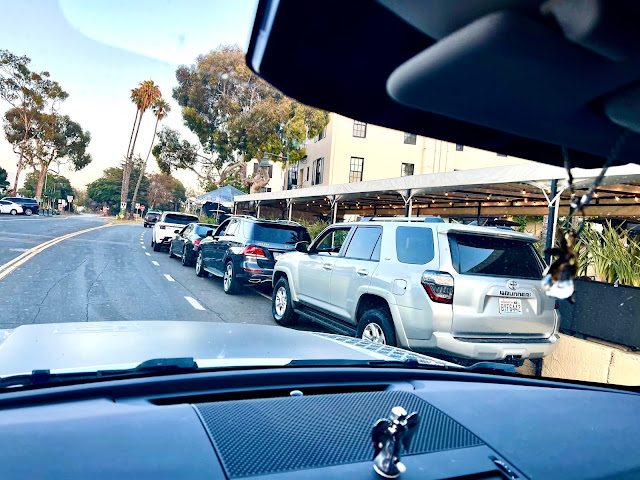 Last Saturday evening, SBPD was phoned and, according to their call log, an officer arrived on the scene at 7:32 pm, asked valets at Lucky’s to move the offending vehicles and issued them with a warning to cease and desist from obstructing the road.

We brought this situation to the attention of SBPD Public Information Officer Sergeant Ethan Ragsdale, along with the new Interim Police Chief MaryLinda Arroyo.

Consequently, Sgt. Ragsdale, accompanied by SBPD’s Traffic Enforcement supervisor, visited Lucky’s on the following Wednesday morning at 11:30 and thereafter confirmed that they’d met with General Manager Leonard Schwartz, who assured them that, henceforth, Lucky’s would refrain from obstructing the road.

“Interim Police Chief Arroyo is looped in on this,” Sgt. Ragsdale told us, suggesting that SBPD has gotten serious about enforcement.

Turns out, they are serious. 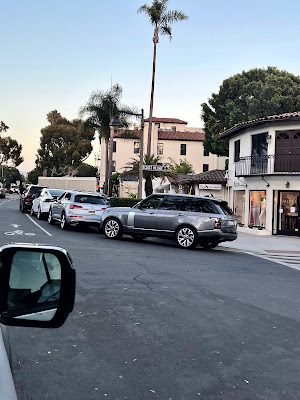 Because after the valets at Lucky’s resorted to double-parking a stream of vehicles from its parklet perimeter to the corner of Coast Village Circle, Sgt. Ragsdale told us, “We are going to upgrade to Plan B: engineering and Public Works.” 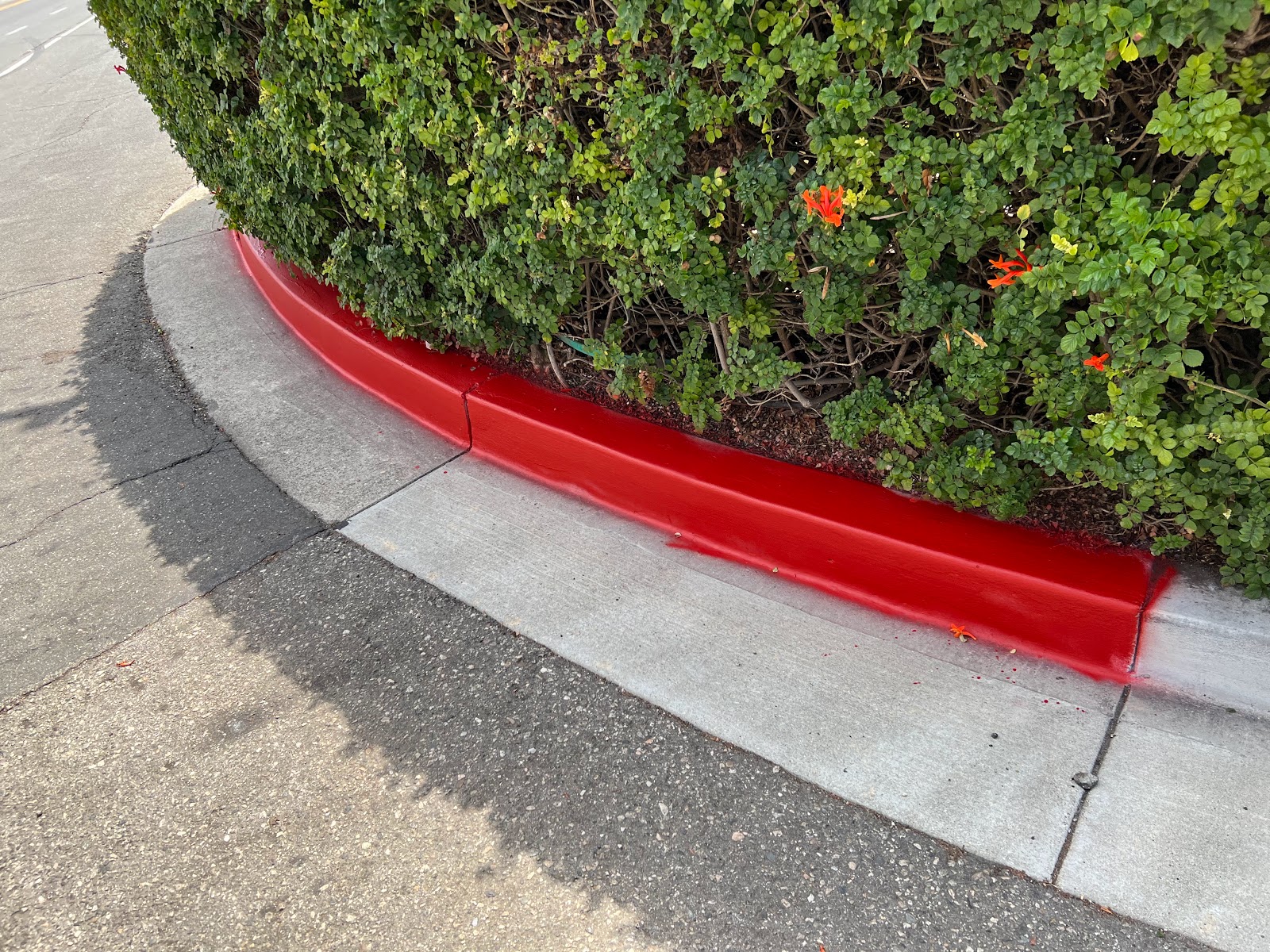 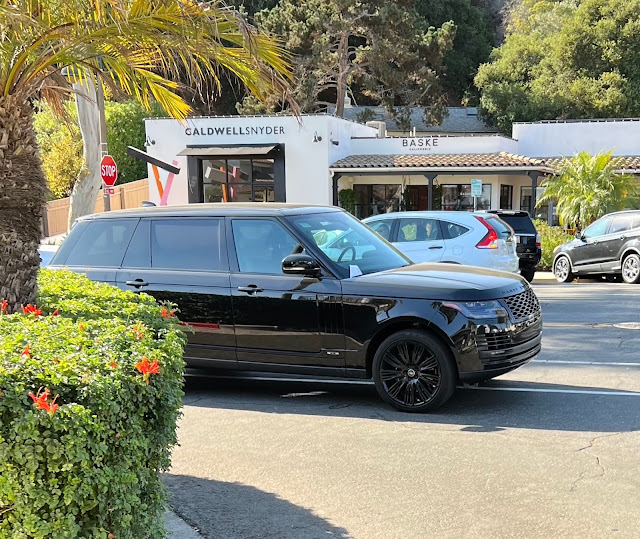 In addition, for the first time in many months, parking enforcement officers were out issuing tickets to vehicles over-staying green-curb 15-minute spaces.

This practice is now expected to continue.

This excerpt: “Removing 20% of the available public street parking to build a handful of 'temporary' outdoor parklets was never sustainable for the majority of businesses in the area, has exacerbated the preexisting parking shortage and compromises public safety.”

Another: “The parking problem on CVR is compounded when you consider the impact of adding 253 parklet seats, some of which are in violation of the sizing guidelines posted on the city’s website.  Using the city’s own municipal code requirement of one parking space per three restaurant seats, 84 parking spaces are required to support the parklets.  Rather than adding 84 parking spaces, parklets have subtracted 28 parking spaces resulting in a net deficit of 112 parking spaces.

"To put these numbers in perspective, and understand how valuable each space is, there are a grand total of 117 parking spaces available on CVR today!  The overall parking problem is further exacerbated with the reduction of parking on Coast Village Circle caused by the 101-freeway construction.  The upcoming roundabout construction at Olive Mill Road and CVR will likely be an additional stress to the area.”

Their letter asks for immediate relief through the removal of parklets on CVR.

“Our livelihoods,” it concludes, “depend on it.”

When the City Council voted to extend parklets, perhaps their thinking was focused on pedestrian zones on State Street (where parking issues do not matter) and parallel parking elsewhere downtown with nary a concern over the effect these parklets would have on CVR in Montecito. And now, faced with complaints, the city’s rationale is diagonal parking-PLUS.

Which seems to be business as usual for city officials when it comes to matters concerning CVR.

Let’s examine that for a moment.

HOW CVR BECAME PART OF THE CITY OF SANTA BARBARA

Most Montecitans don’t even know that CVR once belonged to Montecito.  Those who do erroneously cite a supposed arrangement by which the city provided a sewage system in exchange for annexation and tax revenues.

But here’s what really went down:

On the Ides of March in 1960, business and property owners of CVR held a referendum on whether to join the city. Fifty-three of 72 qualified voters cast ballots. By a majority of 23 to 15 they opted to join. Thus, on 12 April 1960, the “Montecito Strip Annexation” was formally adopted by City Council, Ordinance No. 2765.

CVR’s business and property owners back then believed the city would provide them better services than the county.  And maybe it did back then.

The city excises business license tax, sales tax, property tax and hotel occupancy tax from CVR, adding up to near $5 million annually. In return, the city expends a mere several hundred thousand dollars per year through its various services and maintenance, such as tree trimming and street sweeping—and a new road coat each decade. (The city used to supply decent Christmas decorations but slacked off in recent years, perhaps due to anti-Christmas witless wokeness. Or maybe just to save money.)

It doesn’t take a genius to calculate that this arrangement is skewed; it has evolved into a bum deal for the shopkeepers and residents of CVR and needs rectification—perhaps a referendum to de-annex—if the city does not pay more attention to CVR’s needs and provide equitable services commensurate with how much revenue CVR merchants, professional service practitioners and residents contribute to city coffers.

City managers also make decisions about CVR’s destiny (such as planning) that run contrary to what the majority of CVR businesses and property owners desire for their community.

A perfect example of this is restaurant parklets.

Posted by Robert Eringer at 9:32 AM