SB NEWS-PRESS: THE INVESTIGATOR: GLAMPING AT THE GROVE 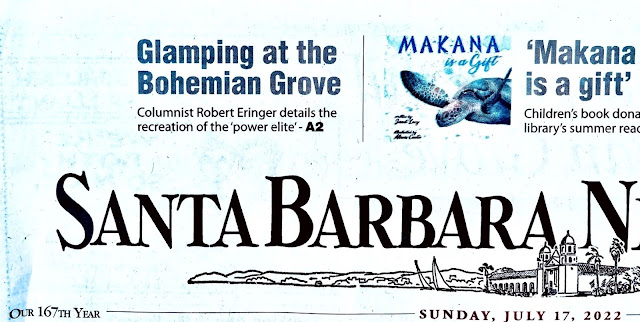 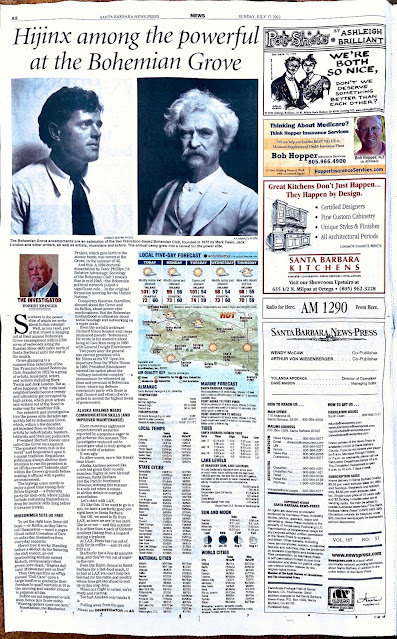 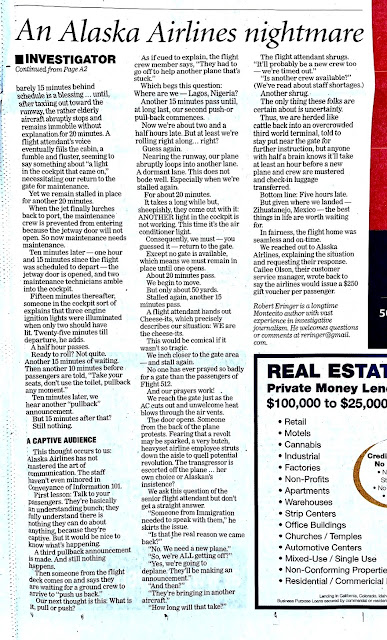 So where is the power elite of which we write about in this column?

Well, part of that crowd is hanging out at their annual Bohemian Grove encampment within 2,700 acres of redwoods along the Russian River (400 miles north of Santa Barbara) until the end of the month.

Grove glamping is a summertime extension of the San Francisco-based Bohemian Club, founded in 1872 by a group of artists, musicians, actors, and writers including Mark Twain and Jack London. But as often happens, artsy clubs (and neighborhoods) become trendy and ultimately get corrupted by high prices, which push artists and writers out of the ‘hood to make way for wealthier folk.

Our research and investigation into the power elite decades ago quickly led to Bohemian Grove, which, within a few decades, got hijacked from writers and artists by industrialists, bankers, lobbyists, and their pet politicians.

President Herbert Hoover once called the Grove encampment “The greatest men’s club in the world” and bequeathed upon it a quaint tradition: Republican politicians always disclose their intention to run for president at an off-the-record “lakeside chat” within the Grove’s grounds before making it official with a public announcement.

The bigwigs come mostly to enjoy a good time among their fellow bigwigs—a fraternity party for men-only, whose hijinks include costuming themselves in drag for musical skits (long before it became trendy).

To set the right tone, these old boys—or BoHos, as they like to call themselves—enact a pagan ritual called Cremation of Care to unburden themselves from everyday concerns. 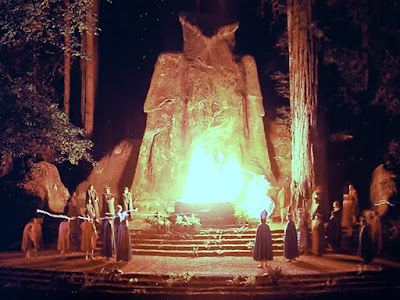 Here’s how it works: Standing before a 40-foot shrine featuring the club mascot, an owl (symbolizing wisdom) named Moloch, ceremonially robed grown men chant, “Begone dull care! Midsummer sets us free!” Then they sacrifice an effigy named “Dull Care” upon a large bonfire to symbolize their freedom to quaff martinis at ten in the morning and wander around in pajamas all day.  if they need to take a whiz, well, they are encouraged to consult Mother Nature, which is why this place is known as “the pee on a tree club.”

BoHos are not supposed to talk shop, hence this Grove motto: “Weaving spiders come not here.

Nonetheless, the Manhattan Project, which gave birth to the atomic bomb, was woven at the Grove, summer of ’42.

And this: A 1994 doctoral dissertation by Peter Phillips (A Relative Advantage: Sociology of the Bohemian Club) reveals that in mid-1945 “the Bohemian political network played a significant role… in the original formation meeting for the United Nations.”

Conspiracy theories therefore abound about the Grove and its BoHos, about power elite

machinations. But the Bohemian brotherhood is ultimately about social bondage and networking on a super scale. Even the socially awkward Richard Nixon bonded with these misnamed pseudo “bohemians.”  About the transvestite productions, President Nixon was tape-recorded as saying, “It is the most faggy goddamned thing you can ever imagine” and he wrote in his memoirs about being at Cave Man camp in 1950 with General Dwight Eisenhower. 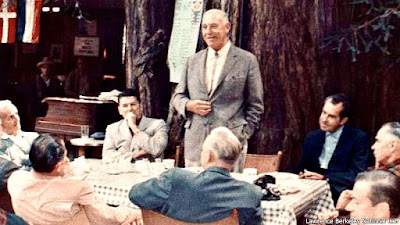 Two years later the general was elected President with Mr. Nixon as his VP. Upon his departure from the White House in 1960, President Eisenhower warned the nation about the “military-industrial complex”—a phenomenon he witnessed up close and personal at Bohemian Grove, where top defense contractors party with those in high finance and others cherry-picked to ascend the highest levels of government.

NOTE: The News-Press did not print this final section on Bohemian Grove.

The grounds are divided into about 125 camps—with names such as Wild Oats, Woof, and Toyland—of 20-50 members each. One such camp—Poison Oak—would throw an annual “rocky mountain oyster” luncheon, courtesy of a cattle baron.

Perhaps this helped elderly Bohemians “cross the river,” BoHo code for decamping the grounds and taking their love to town.

There are two such towns, Monte Rio and Guerneville, whose inns and motels swell with ladies (and gentlemen) of the night, in from Nevada and elsewhere for three bustling weeks of liberating BoHos from whatever dull care they’ve been suffering.

Decades ago, when we investigated Bohemian Grove, this tricky trail led to Manu Kanani, the manager of Northwood Lodge in Monte Rio, who confirmed to us the presence of hookers and their camper clients, the names of which were mind-blowing.

It resulted in our front-page story in Globe, the weekly tabloid, with this headline: “Reagan in Sex Camp Rumpus.”

This was, of course, during the Grove’s heyday when just about everyone senior in the Reagan Administration—George Shultz, Caspar Weinberger, James Baker, Donald Regan, and Bill Casey—unburdened themselves in the redwoods. 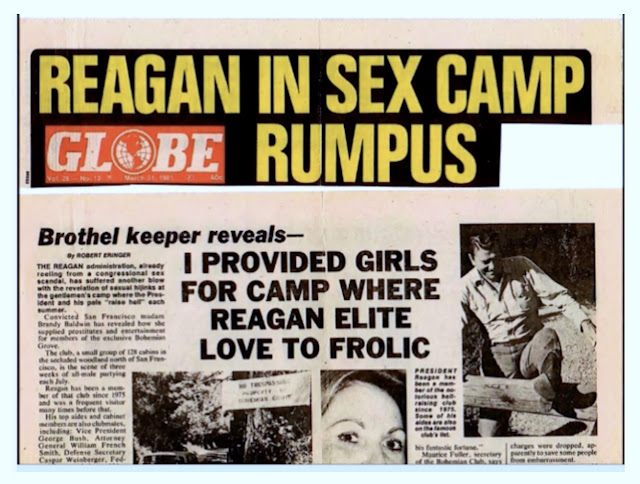 Question: Will BoHo habitue Henry Kissinger, at age 99, manifest himself in the redwoods this year to pee on a tree, jump the river—or both?

Given numerous nightmare airport/aircraft scenarios reported by a populace eager to get airborne this summer, The Investigator ventured out to investigate what is truly going on in the world of aviation.

Alaska Airlines seemed like a safe bet given their usually seamless flights on new aircraft between Santa Barbara and the Pacific Northwest.      However, nothing this summer is a safe bet when it comes to airline delays or outright cancellation.

Let’s start with LAX. It’s like this, if we want to go to a zoo, we have a perfectly good one right here in Santa Barbara.

But, okay, we need to fly from LAX, so here we are in zoo-land, like it or not—and this summer it is wilder than a pack of Gibbons monkeys fleeing from a leopard during a typhoon.

Peets has run out of milk for their coffee—and it’s only 8:23 am. Starbucks has a line 43 minutes long and they’ve run out of sugar-in-the-raw. Even the Habit, decent in Santa Barbara  for a fast-food snack, is so bad at LAX you can’t help but feel bad for the cattle and poultry whose lives got sacrificed to end up in this crap-hole.

When our flight is called, we’re ready and roaring.

Too bad Alaskan only thinks it is.

Pulling away from the gate barely 15 minutes behind schedule is a blessing… until, after taxiing out toward the runway, the rather elderly aircraft abruptly stops and remains immobile without explanation for 20 minutes. A flight attendant’s voice eventuality fills the cabin, a fumble and fluster, seeming to say something about “a light in the cockpit that came on” necessitating our return to the gate for maintenance.

Yet we remain stalled in place for another 20 minutes.

When the jet finally lurches back to port, the maintenance crew is prevented from entering because the jetway door will not open. So now maintenance needs maintenance.

Ten minutes later—one hour and 15 minutes since the flight was scheduled to depart—the jetway door is opened and two maintenance technicians amble into the cockpit.

Fifteen minutes thereafter, someone in the cockpit sort of explains that three engine ignition lights were illuminated when only two should have lit. Twenty-five minutes till departure, he adds.

A half hour passes.

Ready to roll? Not quite. Another 15 minutes of waiting.  And then another ten minutes before passengers are told, “take your seats, don’t use the toilet, pullback any moment.”

But 15 minutes after that, still nothing.

This thought occurs to us: Alaska Airlines has not mastered the art of communication; they haven’t even minored in Conveyance of Information 101.

First Lesson: Talk to your passengers. They’re basically an understanding bunch; they fully understand there is nothing they can do about anything, because they’re captive. But it would be nice to know what’s happening.

A third pullback announcement is made.  And still nothing happens.

Then someone from the flight deck comes on and says they are waiting for a ground crew to arrive to “push us back.”

Our next thought is this: What is it, pull or push?

As if cued to explain, the flight crew member says, “They had to go off to help another plane that’s stuck.”

Which begs this question: Where are we—Lagos, Nigeria?

Another 15 minutes pass until, at long last, our second push- or pullback commences.

Now we’re about two and a half hours late. But at least we’re rolling right along… right?

Nearing the runway, our plane abruptly loops into another lane.  A dormant lane. This does not bode well. Especially when we’re stalled again. For about 20 minutes.

It takes a long while but, sheepishly, they come out with it: ANOTHER light in the cockpit is not working. This time it’s the air conditioner light.

Except no gate is available, which means we must remain in place until one opens.

We begin to move. But only about 50 yards. Stalled again, another 15 minutes pass.

A flight attendant hands out Cheese-its, which precisely describes our situation: WE are the cheese-its.

This would be comical if it wasn’t so tragic.

We inch closer to the gate area—and stall again.

No one has ever prayed so badly for a gate than the passengers of Flight 512.

And our prayers work!

We reach the gate just as the AC cuts out and unwelcome heat blows through the air vents.

The door opens. Someone from the back of the plane protests. Fearing that a revolt may be sparked, a very butch, heavyset airline employee struts down the aisle to quell potential revolution. The transgressor is escorted off the plane… her own choice or Alaskan’s insistence?

We ask this question of the senior flight attendant but don’t get a straight answer.

“Someone from Immigration needed to speak with them,” he skirts the issue.

“Is that the real reason we came back?”

“Yes, we’re going to deplane. They’ll be making a announcement.”

“They’re bringing in another aircraft.”

“How long will that take?”

The flight attendant shrugs. “It’ll probably be a new crew too—we’re timed out.”

“Is another crew available?” (We’ve read about staff shortages.)

The only thing these folks are certain about is uncertainty.

Thus, we are herded like cattle back into an overcrowded third world terminal, told to stay put near the gate for further instruction, but anyone with half a brain knows it’ll take at least an hour before a new plane and crew are mustered and check-in luggage transferred.

But given where we landed—Zihuatanejo, Mexico—the best things in life are worth waiting for.

(In fairness, the flight home was seamless and on-time.)

We reached out to Alaska Airlines explaining the situation and requesting their response. Cailee Olson, their Customer Service Manager, wrote back to say they would issue a $250 gift voucher per passenger.

Posted by Robert Eringer at 7:54 AM