SB NEWS-PRESS: THE INVESTIGATOR: CALI PART-TIMERS MAY HAVE TAX OBLIGATIONS 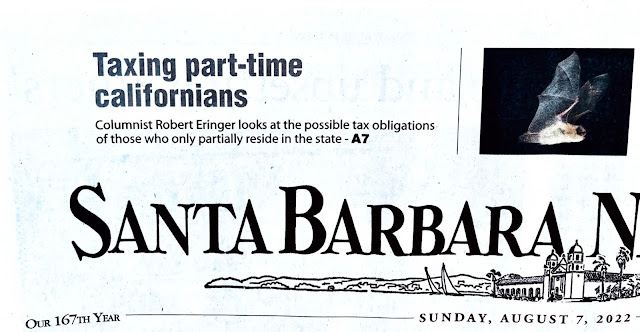 We know a bunch of folks in Santa Barbara County who seem to believe that if they are six months and one day absent from California, they have no obligation to file a tax return in this state but only in the state where they own or rent their first (or second) home.

This is known in tax law circles as “The Six-Month Presumption.”

Turns out, these half-year residents are not only badly mistaken but have rendered themselves potentially liable to penalties and interest going all the way back to when they first arrived in The Golden State.

Local Myth:  If you reside in California for one day less than six months do you not have to file an income tax return with this state’s Tax Franchise Board (FTB).

Reality: “The Six-Month Presumption” is only that, a presumption. The true test for deciding whether the FTB considers you a resident is what Chris Manes, a Palm Springs-based California tax law specialist, calls “The Plurality Rule.”

This is how that principle works, according to Mr. Manes: “Let’s say you spend four months in California, three months in what you consider your home state and spend the rest of the year traveling. The FTB would determine that you are a resident of California and must pay California income tax on the basis that you spend more time in California than what you call your primary home elsewhere.

“A special division of the FTB has for years systematically targeted seasonal ‘part-time’ residents—non-residents who spend part of the year here—for audit.  If he FTB finds significant taxable income coupled with meaningful contacts with California (such as a vacation home or long visits to the state) it can lead to the launch of a full-blown residency audit which can fill state coffers with tens of thousands of dollars in back taxes—and years of legal wrangling.”

In other words, the FTB can determine that persons who consider themselves non-residents are, in fact, residents for the purposes of income tax, based not on time spent in the state but on the FTB’s “Closest Connection Test."

The FTB’s website explains their underlying theory of residency: “Since your residence is usually the place where you have the closest ties, you should compare your ties with California with your ties elsewhere. It is the strength of your ties, not the number of ties.”

·      Location of your principal residence.

·      Where your vehicle is registered.

·      Location of your healthcare providers, accountants, and attorneys.

To this list, Mr. Manes adds The Plurality Rule and another determination: “How larg

Bottom line, says Mr. Manes, “If your stay in California is not of temporary or transitory nature… you are taxed on your income from all sources.”

DIRECT FROM THE FRANCHISE TAX BOARD

A Public Affairs staffer from the FTB told The Investigator: “It is noteworthy that a taxpayer can be a resident of more than one state for income tax purposes.”

We offered the FTB two hypothetical cases for their view on what, if any, California tax obligations would exist:

Hypothetical Case Number One: Subject is retired and comes from another state, where he still has a home. He lives in the other state for five-to-six months of the year and ensures that he is not in California for more than 182 days in any given calendar year. He files an income tax return in the state where he is from but not in California.

Hypothetical Case Number Two: Subject is a sculptor who has departed California, bought a house in another state, and intends to reside outside of California full time. However, subject continues to market his work through a California-based gallery.

FTB response: “When a taxpayer is a nonresident of California, they will still have a California tax obligation if they have California-sourced income.”

TOUGHER THAN THE IRS

Last month Forbes magazine reported, “It seems like any connection to California is enough to get you taxed there,” adding, “the Franchise Tax Board is even tougher than the IRS.”

Manes Law, again: “FTB auditors may appear out of nowhere to interview neighbors. They can subpoena a taxpayer’s utility bills and credit card statements. Or you may receive the dreaded 4600 Notice demanding an income tax return as a prelude to a full-blown audit.”

Parents in Santa Barbara are in an uproar over a particular book available in the library of Santa Barbara High School (SBHS) that they consider to be under-age pornographic material. They further believe that the book in question, Gender Queer, violates state and federal obscenity laws because it contains obscene graphic images of minors.

One parent complained to the Santa Barbara’s County Sheriff’s Office (SBCSO) citing California Penal Code Part 1 Title 9 Chapter 7.5 Obscene Matter 311.1 (a): “Every person who brings into this state or possesses any obscene matter knowing that the matter depicts a person under the age of 18 years personally engaging in or personally simulating sexual conduct shall be punished either by imprisonment in the state prison, by a fine not to exceed $10,000, or by fine and imprisonment.”

SBCSO determined that because SBHS is in the city, the Santa Barbara Police Department (SBPD) has jurisdiction to investigate, not county law enforcement.

So, the parent took Gender Queer and a copy of the penal code to SBPD and showed both to Police Officer Mark Corbett who, after viewing the material, concurred that it appeared to violate California’s penal code (said the parent), wrote up a report and sent it to the Investigation Section where it was issued a case number: 22-30769.

Three weeks later (this past Wednesday), the parent learned that a Sergeant Mike Brown of SBPD decided not to pursue an investigation.

The book, by Maia Kobabe, who describes herself as “a binary, queer author,” is panned on Amazon by one reviewer as “perverted, coarse, unadulterated pornography targeted to children. This is pedophilia. Evil.”

It is therefore no surprise that Bay Area Reporter, which serves the LGBTQ community in San Francisco, gleefully calls Gender Queer the “most banned” book in the USA.

They wrote: “School boards in Virginia, Florida, North and South Carolina began pulling the book from library collections” due to “nude characters and sexual scenarios that they deem inappropriate for children.”

Last month, Gender Queer was removed from the library of Fairview High School in Pennsylvania.

Christy Lozano, a local educator who ran unsuccessfully for Santa Barbara County Superintendent of Schools earlier this year, told The Investigator: “This material is pornography and has no place in the hands of children.  In all my years, I have never been handed a book with descriptive pictures of a man and woman engaging in this type of sexual behavior but all of the sudden somehow its okay when it is two males.  No, it is absolutely NOT okay.  The School Board Members should be held responsible for allowing such materials in our schools; it is they who approved it.”

We reached out to Sherri Bryan and Elise Simmons, librarian and principal, respectively, of SBHS, for an explanation.  We were referred to Nick Masuda, chief of communications for the SB Unified School District. Despite having provided three-and-a-half weeks for a response, we heard nothing back.

We reached out to SBPD for comment on how and why Sgt. Brown reached his decision not to investigate.  Public Information Officer Sgt. Ethan Ragsdale told The Investigator, “We did accept a citizen counter report about the matter. The report was reviewed and determined there was no crime according to California law. The case is now closed.”

The latest Putin poisoning victim appears to be Anatoly Chubais, the 67-year-old former Putin adviser who abruptly resigned from his top job and fled Russia soon after putrid Putin’s brutal invasion of Ukraine earlier this year.

A few days after Mr. Chubais’ departure, Mr. Putin blasted Russians “who can’t live without foie gras or oysters.”  In a threatening message that seems to have been aimed directly at the Kremlin’s former chief-of-staff (and who, in 1996, gave Mr. Putin his first Kremlin job), the Russian dictator announced that his nation “will always be able to distinguish true patriots from scum and traitors and will simply spit them out like an insect in their mouth, spit them onto the pavement.”

Mr. Chubais was admitted to a hospital in Sardinia last Sunday after falling ill from a rare neurological disorder that caused his arms and legs to go numb along with facial paralysis.

Italian intelligence services are said to be awaiting blood test results to determine if Mr. Chubais has been spat onto the pavement like an insect by Putin the Poisoner.

The White House is counting on the voting public not noticing the difference between a highly dangerous man known as “The Merchant Death” who was sentenced to 25 years in a maximum-security penitentiary for, among other crimes, “conspiracy to kill U.S. nationals” and a basketball player who brought less than a gram of cannabis oil into Russia, for which she was harshly sentenced earlier this week to nine years in prison.

If released, Mr. Bout will pose a huge threat to the national security of the United States.

Does anyone at the White House care?

No. Asked to choose between national security and what they hope will be a public relations success, well, for this administration, no contest.

Such an unbalanced trade will serve only to incentivize the putrid Putin regime into taking new hostages for future swaps while providing Mr. Putin (who is laughing at the United States for its sheer stupidity) a major victory.

Posted by Robert Eringer at 7:53 AM