SB NEWS-PRESS: THE INVESTIGATOR: CELEBRITIES & THE DICTATORS THEY LOVE 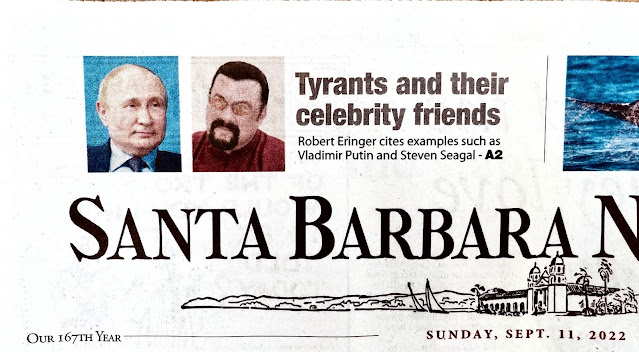 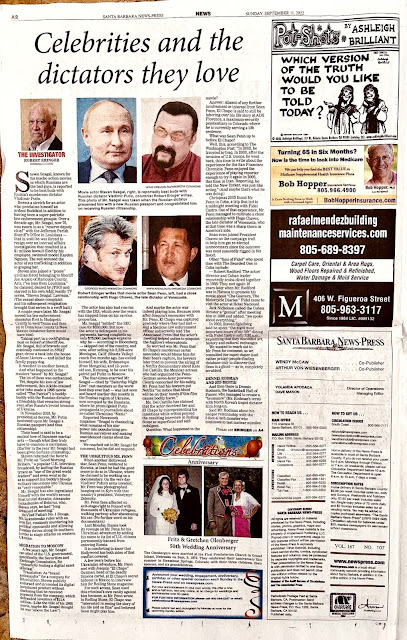 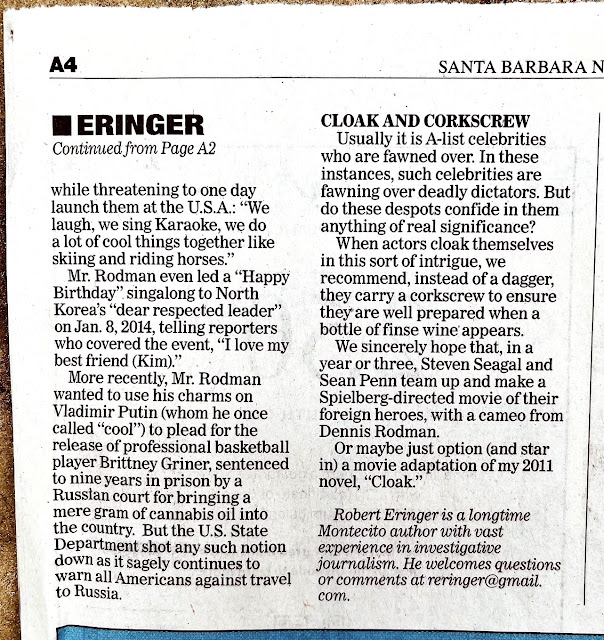 Steven Seagal, known for his macho action movies in which Russians are the bad guys, is reported to be best buds with Russia’s murderous dictator Vladimir Putin.

Seems a stretch for an actor who proclaims himself an ardent Buddhist in addition to having been a super-patriotic law enforcement groupie.

Over a decade ago, Mr. Seagal, now 70, was sworn in as a “Reserve Deputy Chief” with the Jefferson Parish Sheriff’s Office (JPSO) in Louisiana—that is, until he was forced to resign over an internal affairs investigation that resulted in a $1 million lawsuit filed by his employee, swimsuit model Kayden Nguyen, that accused the actor of sex trafficking in addition to groping her.

Steven also joined a “posse” (civilian force) belonging to Sheriff Joe Arpaio of Maricopa County, Arizona (“on loan from Louisiana,” he claimed, denied by JPSO) and starred in his own A&E reality TV series, Steven Seagal: Lawman. (The sexual abuse complaint and his subsequent resignation brought that series to a swift halt.)  A couple years later, Mr. Seagal moved his law enforcement obsession first to Hudspeth County in west Texas and then on to Dona Ana County in New Mexico (whatever force would have him). 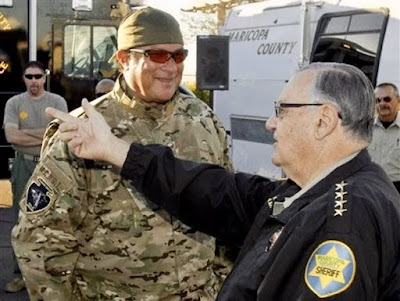 Taking part in a cockfighting bust on behalf of Sheriff Joe, Mr. Seagal, full of bravado and comically costumed in SWAT gear, drove a tank into the house of Jesus Llovera—and killed the family puppy dog.

(It resulted in another lawsuit).

And what happened to the roosters “saved” by Mr. Seagal?

The lot of them, euthanized.

Yet, despite his love of law enforcement, this Aikido-trained actor (who made a 1998 movie called The Patriot) is buddy-buddy with the Russian dictator—a friendship that remains strong even after Russia’s brutal invasion of Ukraine.

In November 2016, by presidential decree, Mr. Putin bestowed upon Mr. Seagal a Russian passport (and thus citizenship). Their bond is said to be a mutual love of Japanese martial arts—though what they truly have in common is narcissism.

(Earlier in the year Mr. Seagal had been given Serbian citizenship.) 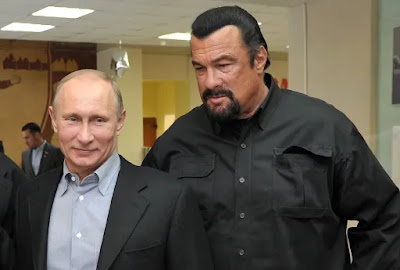 Steven returned the favor Mr. Putin on Good Morning Britain, a popular UK television broadcast, by hailing the Russian tyrant as “one of the great world leaders” and even went so far as to support his buddy’s bloody military incursions into Ukraine as “very reasonable.” 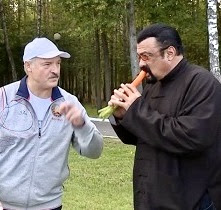 Mr. Seagal has also ingratiated himself with the world’s second most brutal dictator, Alexander Lukashenko of Belarus, who, Steven says, he had “long dreamed of meeting.”

As Vlad Putin’s Number One Stooge, Mr. Lukashenko rules with an iron fist, routinely murdering his political opponents and allowing Russian forces along its southern border to stage attacks on western Ukraine.

A few years ago, Mr. Seagal ran afoul of the U.S. government, specifically, the Securities and Exchange Commission, for “unlawfully touting a digital asset offering.”

Translation: As “brand ambassador” for a company for Bitcoin2Gen, Steven publicly endorsed and promoted their digital investment product without disclosing that he received payment from the company, which defrauded investors of $11.4 million. (Like the title of his 1988 movie, maybe Mr. Seagal thought he was Above the Law.)

The actor has also had run-ins with the IRS, which over the years has slapped liens on his various properties.

Mr. Seagal “settled” the SEC case for $330,000. But now the actor is delinquent in his payments, having coughed up only $75,000.perhaps explaining why he—according to Bloomberg—skipped out of the country, and now, after selling his 5,329-acre Montague, California (Shasta Valley) ranch five months ago, has exiled himself, his wife, Erdenetuya (from Mongolia), and 12- year-old son, Kunzang, to be near his putrid pal Putin in Moscow.

The four times married Mr. Seagal—cited by Saturday Night Live cast members as the worst host they ever had—was last seen and heard (earlier this month) in the Donbas region of Ukraine, now occupied by the Russians, where he promulgated Putin propaganda to journalists about so-called Ukrainian “Nazis.”

Reported Newsweek magazine: “Seagal is channeling what remains of his star power into popularizing pro-Russian narratives and making unevidenced claims about the war.”

We reached out to Mr. Seagal for comment, but he did not respond.

When another Hollywood star, Sean Penn, ventured to Eurasia, at least he had the good sense to do so in Ukraine, where he claimed to be working on a documentary.   On the very day Vladimir Putin’s army invaded, Mr. Penn was photographed hanging out in Kyiv with that country’s president, Volodymyr Zelensky.

Last Monday, Russia took its revenge on Mr. Penn for his Ukrainian adventure by adding his name to their list of U.S. citizens permanently banned from entering Russia. 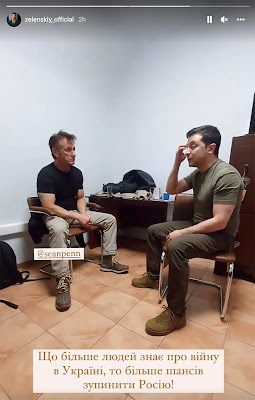 Mr. Penn then affected an exit-stage-right to Poland with thousands of Ukrainian refugees, walking partway after abandoning his car. (No further word on his documentary.)

It is comforting to know that Hollywood has both sides of that conflict covered.

A few years before his Ukrainian adventure, Mr. Penn met with Joaquin “El Chapo” Guzman, head of the deadly Sinaloa cartel, at El Chapo’s secret hideout in Mexico to interview him for Rolling Stone magazine.

For such access, Sean used this criminal’s own vanity against him because, as Mr. Penn wrote in Rolling Stone, El Chapo was “interested in seeing the story of his life told on film” and believed Sean might play him.

And maybe the actor was indeed playing him. Because soon after Joaquin’s encounter with Mr. Penn, El Chapo was captured precisely where they had met—and a Mexican law enforcement officer indiscreetly told The Associated Press that the actor’s meeting helped them pinpoint the fugitive’s whereabouts. 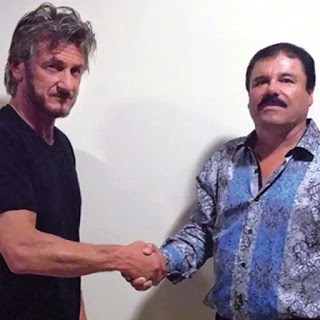 So worried was Mr. Penn that El Chapo’s murderous cartel associates would blame him for their boss’s capture, his lawyers later tried to prevent the airing of a Netflix documentary about Kate Del Castillo, the Mexican actress who had organized the Penn-Guzman seven-hour powwow.  Clearly concerned for his safety, Mr. Penn had his lawyers put Netflix “on notice that blood will be on their hands if this film causes bodily harm.”

Ms. Del Castillo has claimed that the actor deceived her and El Chapo by misrepresenting his intentions while critics panned the resulting interview in Rolling Stone as superficial and self-indulgent.

Question: What happened to the movie?

Answer: Absent of any further involvement or interest from Sean Penn, El Chapo is said to still be laboring over his life story at ADX Florence, a maximum-security penitentiary in Colorado where he is currently serving a life sentence.

What was Sean Penn up to before El Chapo?

Well, this, according to The Washington Post: “In 2002, he traveled to Iraq. In 2003, after the invasion of U.S. troops, he went back, this time to write about the experience for the San Francisco Chronicle. Penn enjoyed the experience of playing reporter enough to try it again in 2005, this time in Iran. Reporting, he told the New Yorker, was just like acting.” (And maybe that’s what he was doing.)

Christmas 2005 found Mr. Penn in Cuba, a trip that led to a midnight meeting with Fidel Castro. 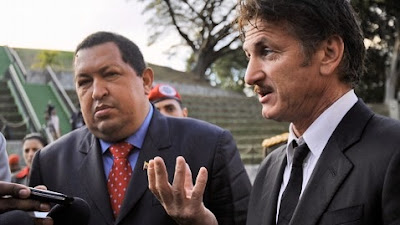 Out of that experience, Mr. Penn managed to cultivate a close relationship with Hugo Chavez, the late dictator of Venezuela, who at that time was a sharp thorn in America’s side. Sean even joined President Chavez on the campaign trail to help him get reelected (unnecessary since the outcome was most assuredly rigged in his favor).

Robert Redford: The actor/director and Cuban leader reportedly scuba-dived together in 1988. They met again 16 years later when Mr. Redford was in Havana to promote his movie about Che Guevara, The Motorcycle Diaries. Fidel came to visit the actor at Hotel Nacional.

Jack Nicholson called the Cuban dictator a “genius” after meeting him in 1998 and added, “we spoke about everything.”

In 2002 Steven Spielberg said he spent “the eight most important hours of my life” dining with Fidel Castro until 2:30 am, explaining that they discussed art, history, and cultural exchanges.

We wanted to reach out to Mr. Penn for comment and so we consulted our super-duper (and rather pricey) people-finding database only to discover that Sean is a ghost—as in, completely scrubbed.

And then there is Dennis Rodman, the basketball Hall of Famer, who managed to create a “bromance” (Mr. Rodman’s term) with North Korea’s tinpot dictator Kim Jong-un. 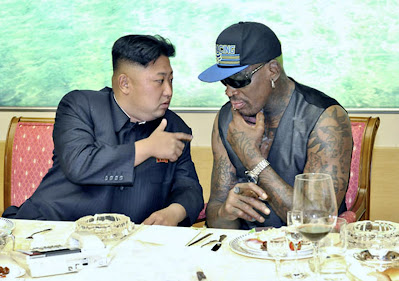 Said Mr. Rodman about his unique relationship with the 5’4” monster who continues to test nuclear missiles while threatening to one day launch them at the USA: “We laugh, we sing karaoke, we do a lot of cool things together like skiing and riding horses.” Mr. Rodman even led a “Happy Birthday” singalong to North Korea’s “dear respected leader” on January 8th, 2014, telling reporters who covered the event, “I love my best friend [Kim].”

More recently, Mr. Rodman wanted to use his charms on Vladimir Putin (whom he once called “cool”) to plead for the release of professional basketball player Brittney Griner, sentenced to nine years in prison by a Russian court for bringing a mere gram of cannabis oil into the country. But the U.S. State Department shot any such notion down as it sagely continues to warn all Americans against travel to Russia.

Usually it is A-list celebrities who are fawned over; in these instances, such celebrities are fawning over deadly dictators. But do these despots confide in them anything of real significance? 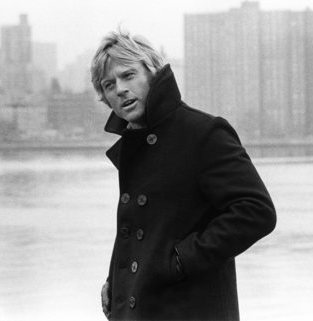 When actors cloak themselves in this sort of intrigue, we recommend, instead of a dagger, they carry a corkscrew to ensure they are well prepared when a bottle of fine wine appears.

We sincerely hope that, in a year or three, Steven Seagal and Sean Penn team up and make a Spielberg-directed movie of their foreign heroes, add a cameo from Dennis Rodman. 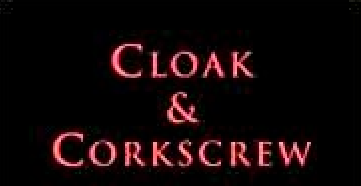 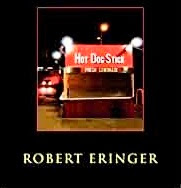 Posted by Robert Eringer at 8:35 AM