SB NEWS-PRESS: THE INVESTIGATOR: AND SO IT GOES: IN SEARCH OF VONNEGUT 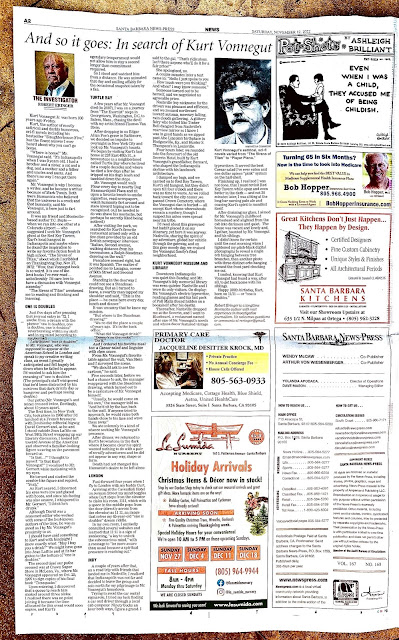 Kurt Vonnegut Jr. was born one hundred years ago yesterday. 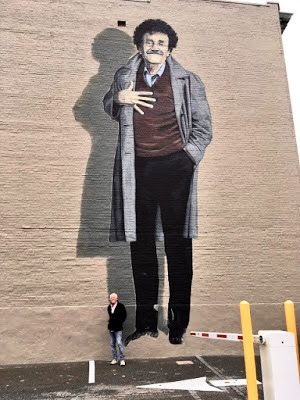 Only Kurt, the author of mostly satirical and darkly humorous novels including his Slaughterhouse-Five, has the best answer I ever heard about why you can’t go home:

“Where is home?  It’s Indianapolis when I was nine years old.  I had a brother and a sister, a cat and a dog and a mother and a father and uncles and aunts.  And there’s no way I can get there again.”

Vonnegut is why I became a writer and he became a writer because of Mark Twain and both believed as Humanists that the universe is a crock and that humanity, said Vonnegut, is here just to fart around.

It was my friend and Montecito-based author T.C. Boyle, when we ran into one another at a Colorado airport as I was on the rebound from looking up Hunter S. Thompson’s spirit in Woody Creek, who suggested I seek Vonnegut’s ghost at the Red Key Tavern, Kurt’s local hangout in Indianapolis and maybe where he found the inspiration to write my favorite fiction book in high school, The Sirens of Titan, about which I scribbled on Thanksgiving Day 27 November 1972, “Wow, that Vonnegut book is so weird.  It is one of the best books I’ve ever read… unbelievably fantastic… I’d sure love to have a discussion with Vonnegut someday.” 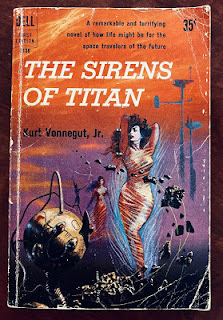 The Sirens of Titan awakened me to reading and thinking and learning.

Our paths (Vonnegut’s and mine) crossed twice, fleetingly, about ten years apart.  The first time, in New York City, took place in 1988 after I’d lunched at a French brasserie with Doubleday editorial bigwig David Gernert and, as he and I stood outside Jean Lafitte on West 58th Street wrapping up our literary discussion, I looked left toward Avenue of the Americas and observed a familiar-looking figure weaving on the pavement toward us.

Is that…? I thought to myself.  “Is that Kurt Vonnegut?” I vocalized to Mr. Gernert while motioning with my eyes.

He turned and studied the zombie-like figure and replied, “Yeah.”

As Kurt neared I discerned his eyes were low and glazed with booze and since his footing was also unsure I whispered to Mr. Gernert, “I think he’s drunk.”

Although David was a seasoned editor who worked with some of the best-known authors of the time he was as awed as I by Mr. Vonnegut’s proximity to us.

I should have said something to Kurt and with hindsight I know exactly what: “May I buy you a drink?”  We might have gone into Jean Lafitte and at its bar gotten to the bottom of “one is doubles.”

The second time our paths crossed was at Crown Super Store in McLean, Virginia where Mr. Vonnegut appeared on 25 October 1997 to sign copies of his final book Timequake.

Upon entering I discovered that a queue to reach him snaked around three aisles and realized there was no point joining it because the time allocated for this event would soon expire and Kurt’s temperament would not allow him to stay a second longer than commitment required so I stood and watched him from a distance.  He was animated that day and smiling affably for the occasional snapshot taken by a fan. 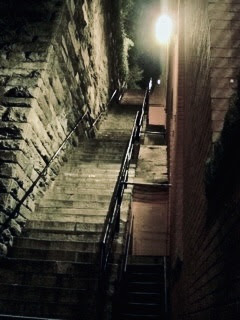 A few years after Mr. Vonnegut died (in 2007) I was on a journey from The Exorcist steps in Georgetown, Washington DC to Salem, Massachusetts chasing the devil with my artist friend Thomas Van Stein and...

...after dropping in on Edgar Allan Poe’s grave in Baltimore we decided on impulse to overnight in New York City and look up Mr. Vonnegut’s haunts.

We began by visiting Kurt’s last home at 228 East 48th Street, a brownstone in a neighborhood called Turtle Bay where he lived for a couple decades and where he died a few days after tripping on his dog’s leash and tumbling down the steps.

Mr. Vonnegut would walk Flour every day to nearby Dag Hammarskjold Plaza and sit upon a favorite bench to smoke cigarettes, read newspapers, watch humanity fart around and stare inward hoping not to be recognized. (All he needed to do was shave his moustache but perhaps he secretly liked being noticed.)

After visiting the park we searched for Kurt’s favorite restaurant armed only with a few clues provided by an old British newspaper interview:  Italian, Second Avenue, walking distance from his brownstone, a Ralph Steadman drawing on the wall. 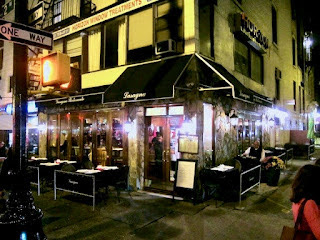 Pescatore seemed right but it was Spanish. The maître d’ pointed me to Lasagna, corner of 50th Street and Second Avenue.

Standing in the doorway I could not see a Steadman drawing but as I turned to leave a swarthy man tapped my shoulder and said, “This is the place—he came here every day, lunch and dinner.”

It was uncanny that he knew my mission.

“But where is the Steadman drawing?”

“We re-did the place a couple of years ago.  It’s in the back office.”

“What did Vonnegut drink?”

And I ordered his favorite meal too:  a Caesar salad and linguine with clam sauce. 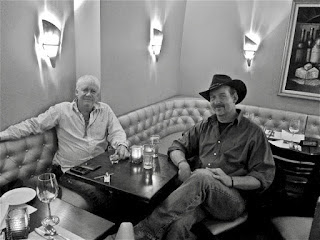 From Vonnegut’s favorite table against the wall Van Stein and I surveyed the scene.   “We should ask to see the cartoon,” he said. 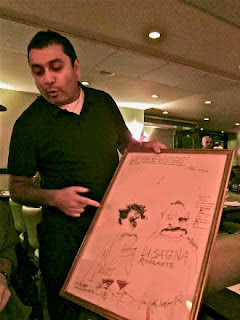 Five seconds later, before we had a chance to ask, the manager reappeared with the Steadman drawing, which turned out to be a caricature of Mr. Vonnegut himself.

“Usually, he would come on his own,” the manager told us.  “And he’d sit by the bar, back to the wall.  If anyone tried to approach he would raise both hands close to his face and wave them away.”

We ate solemnly in a kind of séance seeking Vonnegut’s presence. 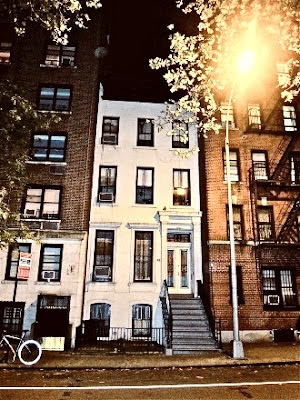 After dinner we returned to Kurt’s brownstone in the dark where it became clear his spirit wanted nothing to do with a pair of scruffy adventurers and he did not appear in any way, shape or form.

Death had not changed this Humanist’s desire to be left alone.

Fast-forward four years when I fly to London with my buddy Curt.

In my own room I excitedly consult several websites and learn that 11:11 is a sign of awakening “a key to unlock the subconscious mind” with a message to “be more aware than usual because a spiritual presence is reaching out.”

A couple of years after that, on a road trip with friends that landed me in Nashville, I realized that Indianapolis was not far and decided to leave the group and solo north for my pilgrimage to Mr. Vonnegut’s hometown.

Trying to avoid the car rental rigmarole I tried my luck finding a car and driver through a local cab company:  Ninety bucks an hour both ways, figure a grand. I said to the gal, “That’s ridiculous.  Isn’t there anyone who’ll do it for a fair price?”

A couple minutes later a text came in: “Hello I just spoke to you… how much were you thinking?  And when? I may know someone.”

Someone turned out to be herself and we negotiated an agreeable price. 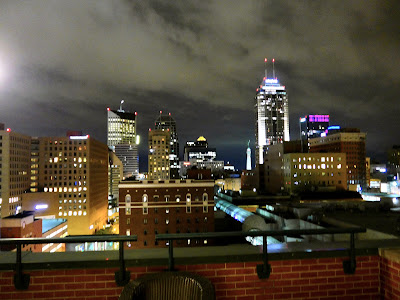 Nashville (my nickname for the driver) was pleasant and efficient and we zoom northward toward autumn, mercury falling, rainclouds gathering.  A glittery fairy that looked like Tinkerbelle dangled from Nashville’s rearview mirror so I knew I was in good hands as we zipped past Abe Lincoln’s birthplace in Hodgenville, Kentucky and Hunter S. Thompson’s in Louisville and four hours later we rounded into the forecourt of the old Severin Hotel, built by Kurt Vonnegut’s grandfather, Bernard, who shaped the Indianapolis skyline with his landmark architecture. 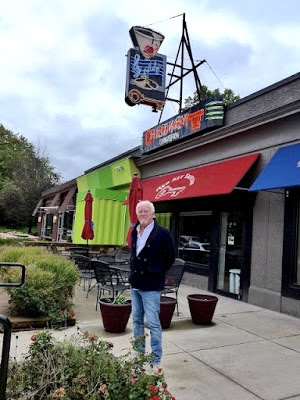 I dumped my bags and we carried on to Red Key Tavern, Kurt’s old hangout, but they don’t open till four o’clock and there was no time to wait and as we rolled back toward the city center we passed Crown Cemetery where the Vonnegut clan is buried, all except Kurt whose whereabouts remain a mystery though I suspect his ashes were spread near his tribe. 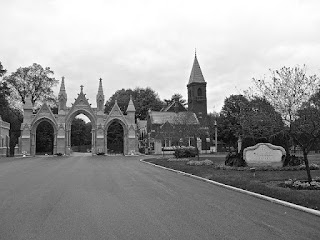 I’d read about this graveyard but hadn’t placed it on my itinerary, yet here it was anyway and Nashville, sharing the spirit of my adventure, glided her vehicle through the gateway and on this gray moody day we cruised the Vonnegut family’s final neighborhood. 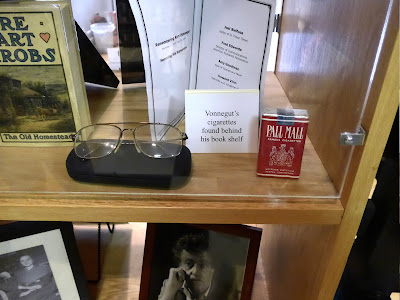 Downtown Indianapolis was quiet this Sunday and Vonnegut’s tidy memorial library was even quieter. Nashville and I were its only visitors.  On display: Vonnegut’s electric typewriter, reading glasses and his last pack of Pall Malls (found hidden on a bookshelf after his death). 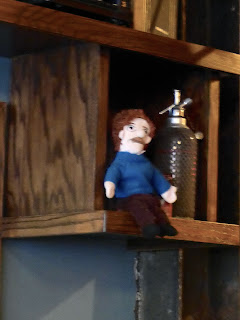 Thereafter Nashville dropped me at the Severin and I launch to Bluebeard, a restaurant named after one of Vonnegut’s novels and whose decor featured vintage typewriters and hence is not overdone as a theme but subtle and discreet, an emphasis on what emanates from the kitchen: the best Caesar salad I’ve ever eaten and one dollar apiece “pink” oysters on the half-shell. 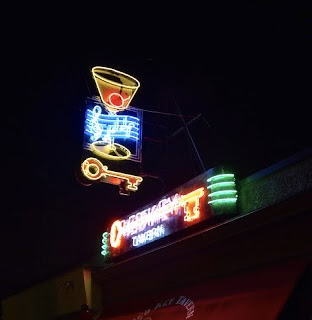 Finishing up I realized I was not done, that I must revisit Red Key Tavern while open and even better in the dark—and not 30 minutes later I was sitting at the long bar nursing pale ale and coaxing Kurt’s spirit to manifest itself. 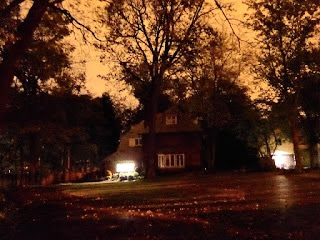 After draining my glass I aimed for Vonnegut’s childhood homestead and alighted from the cab into darkness and quiet.  The house was vacant and lonely and, I gather, haunted by Vonnegut and his siblings.  I didn’t know for certain until next morning when I lightened my pitch-black digital photographs to reveal a single orb hanging between tree branches and then another photo with three distinct orbs hanging around the front yard checking me out.

I smiled knowing that Kurt Vonnegut had found a way after all to get back home with his siblings. 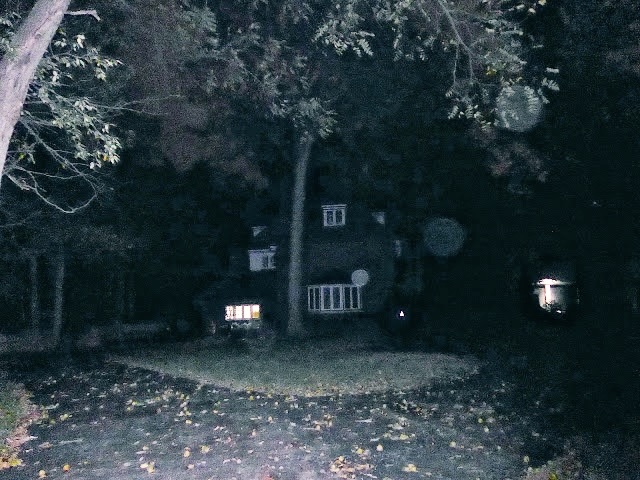 Posted by Robert Eringer at 8:03 AM