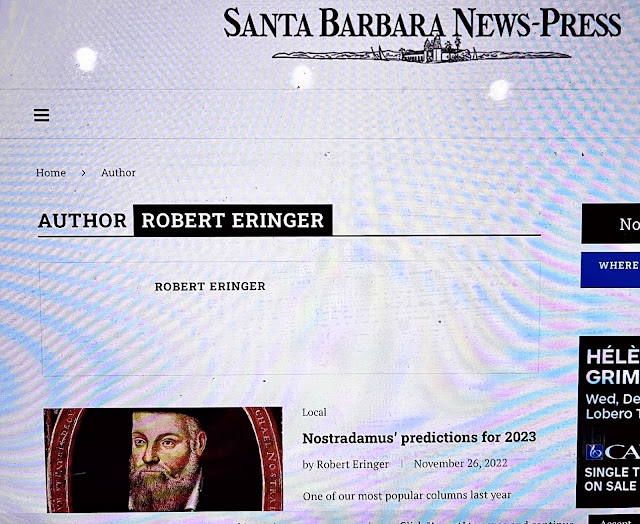 One of our most popular columns last year dealt with the 2022 predictions of Nostradamus, so we would be remiss not to follow up with the famed French seer’s forecast for the upcoming Year of the Rabbit (Chinese astrology).

To recap: Michel de Nostradame’s prophecies were published in 1555 as “quatrain” poetry based upon what he called “judicial astrology.” His predictions played out through the ensuing centuries, among them the Great Fire of London, the French Revolution, the rise of Adolf Hitler, the assassination of JFK, the moon landing and even 9/11.

So what does 2023 have in store for us all according to Nosty’s 500 year-old visions based on his reading of the stars?

To answer this we shall attempt to decipher the prophecies of Nostradamus in the context of current global events.

…because the name of the game for this coming year is a lot of disaster and calamity.

Nosty is interpreted to have predicted a nuclear war for early 2023 between the United States and Russia that will last for 27 years following “seven months great war, people dead through evil.”

Certainly, the Russia-Ukraine war has cast this ugly specter not least because Mad Vlad Putin—identified by Nosty as the antichrist (no big surprise)—has run out of options to defend the eastern regions of Ukraine he invaded and illegally annexed.

Twenty-seven years the war will last.

The unbelievers are dead, captive, exiled.

Poisonous Putin has already been defeated in the Ukrainian regional capital Kherson resulting in a humiliating retreat. And now it is believed that by Christmas the Ukrainians will be in a position to retake Crimea, which was stolen from them by Mr. Putin’s regime eight years ago.

Crimea may be Vlad’s final red line (earlier such “red lines” have already been breached) for triggering tactical nuclear weapons.  No doubt the targeting by his generals (who, judging by their sheer ineptitude, couldn’t plan a booze-up in a brewery) would (one hopes) take wind direction into account lest radioactive fallout from a nuclear detonation “accidentally” wander into a neighboring NATO country. If that happens, Article 5 is invoked and NATO is necessarily obliged to raise arms against Russia, a road that conceivably leads to World War III. Whatever trajectory the Russians believe prudent, wind direction can change, leading us to another Nostradamus prophecy for next year: The depopulation of European countries.

“Within the isles is a very horrible uproar. One will hear only a party of war.”

Of all the thirty NATO-member countries Mr. Putin and his KGB cronies despise Britain most. (The USA comes in a close second.) Which means “uproar in the isles” applies to Blighty.

Nuclear explosions can cause earthquakes and volcanic eruptions.

So let’s move to the major earthquake Nostradamus has forecast for the coming year: A 9.8 quake in the ocean—specifically, the Mariana Trench, in the far western Pacific (between Guam and the Philippines)—from which, he prophesized, giant spiders and locusts would emerge.

But back to putrid Putin for a moment: Supposedly (according to Nostradamus), the Russian despot has put his scientists to work on creating a new kind of soldier—a human-monkey hybrid that can eat anything. This is important because Putin can barely feed his newly mobilized conscripts.

Indeed, the drafting of raw recruits has become a major headache for Vlad. Young males are bailing from Mother Russia by the tens of thousands to lead lives elsewhere, which is of course preferable than to being led to their deaths. Those draftees stupid enough to remain in typical Russian passive mode are trained for several days, provided with rusty old weapons and given rations that months or years ago breached their expiration date. Once these amateur fighters see what they’re up against (not just food poisoning) they are quickly demoralized and a) rebel against their superiors or b) desert or defect, in many cases surrendering pre-battle to their much better trained and armed adversary for whom morale has never been an issue because there is a vast difference between right and wrong.

Here is that Nosty quatrain:

“A monkey of fortune with twisted tongue

will come to the sanctuary of the gods

He will open the door to heretics

And raise up the Church militant.”

And that’s not all.

If Nostradamus is correct, a meteorite the size of a whale will slam into our fragile planet and carry with it an alien species of some sort.

So just for starters we have nuclear blasts and radiation along with the possibility of WWIII, super-duper spiders and locusts and a meteor carrying potentially infectious cooties.

But now some good news: Russia’s despot Putin will be assassinated, as plotted by his closest associates. (Predictable, based on Putin’s dwindling popularity within his own country and the fact that most hits are an inside job, from Jesus of Nazareth’s Judas to  Caesar’s “et tu, Brute?”)

Nostradamus also foresaw that U.S. President Joe Biden will suffer from a mystery disease.  If he was referring to mythomania or pseudologia fantastical (also known as habitual lying) the French prophet clearly got the year wrong because, as we all know, Joe’s pathological condition began decades ago. But perhaps Nosty meant dementia.

Also predicted:  The death in 2023 of the Pope. It is known that Pope Francis suffers from Parkinson’s and also has mobility issues due to long-term sciatica—and he never expected to live and serve more than ten years when he was elected pontiff in March 2013.

The young Pope who succeeds him, Nosty predicts, will cause a scandal that stretches for six years and will result in the demise of the Holy Roman Church.

The two youngest candidates for next Pope are Luis Antonio Tagle of the Philippines, aged 65, and Pietro Parolin of Italy, aged 67, the latter currently second-in-command as the Vatican’s secretary of state. Cardinal Parolin is said to have engaged in secret dealings with the Chinese. About him, the former Bishop of Hong Kong, Cardinal Joseph Zen, has said, “He is lying with his eyes open.”

“In the final persecution of the Holy Roman Church, there will reign Peter the Roman, who will feed his flock among many tribulations, after which the seven-hilled city will be destroyed and the dreadful Judge will judge the people.”

Oh dear, there is more.

Perhaps due to the predicted world war and the chaos that results, “The great audacious brawler… will be elected governor of the army.” As in commander-in-chief.

For some, that would be worse than nuclear detonations, giant spiders and locusts and a meteor strike all put together.

But now add economic disaster due to soaring costs: “So high will the bushel of wheat rise that man will be eating his fellow man.” Cannibalism.

And also social upheaval as the gap widens between social classes: “Dreadful horrors and vengeances.”  Revolution?

And this with regard to John Kerry’s klimate kookiness: Commencing 2023, no rain for 40 years (“the dry earth will grow more parched”) followed by 40 years of constant rain (“there will be great floods”). Could it be the planet’s immune system trying to get rid of us?—a Kurt Vonnegut-ism based on humanity’s bad behavior.

If Nostradamus is to be believed (and even if he isn’t), make sure your Christmas this year is the merriest you’ve ever had because you never know which Christmas may be your last.

And thereafter treasure each and every disaster-free day.

But if disaster strikes?

A martini and a cigar plus that bottle of Opus One you’ve been promising yourself—perfect for New Year’s Eve to kick off the festivities.

According to our top-notch intelligence source in Washington D.C., the Russkies may be ready to cry uncle. They have apparently put out feelers “for a ceasefire and maybe armistice pending negotiations on final status.” Presumably the deal will be that they’ll withdraw from the newly “annexed” regions but retain Crimea.

So let’s put everything into perspective: It is the arrogance and folly of every generation to believe the end is nigh on their watch.

Posted by Robert Eringer at 7:28 AM