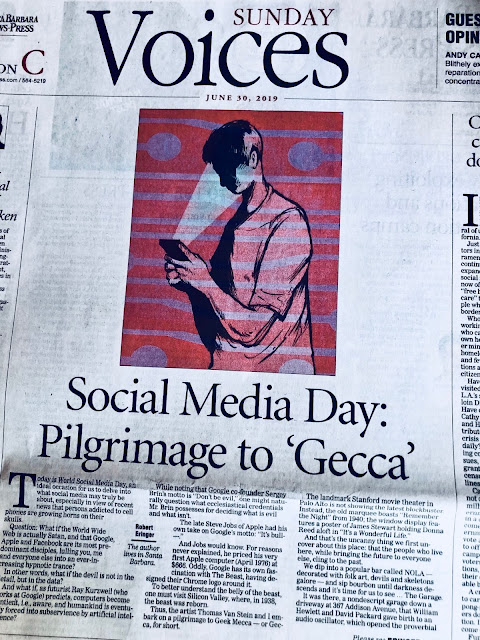 With the ugly truth surfacing about Twitter's collaboration with U.S. government agencies and the Democratic Party to censor its platform from facts inconsistent with the mainstream narrative, we repeat our feature story from the 30 June 2019 issue of the Santa Barbara News-Press.

June 30th is World Social Media Day, an ideal occasion to fathom what social media may truly be about, especially in view of recent news that persons addicted to cell phones are growing horns on their skulls.
Question:  What if the World Wide Web is actually Satan; and that Google, Facebook and Apple are its most predominant disciples, lulling you, me and everyone else into an ever-increasing hypnotic trance?
In other words, what if the devil is not in the detail but in the data?
And what if, as futurist Ray Kurzweil (who works at Google) predicts, computers become sentient i.e. aware and humankind is eventually forced into subservience by artificial intelligence?
While noting that Google co-founder Sergey Brin’s motto is “Don’t be evil,” one might naturally question what ecclesiastical credentials Brin possesses for deciding what is evil and what isn't.
The late Steve Jobs of Apple had his own take on Google’s motto: 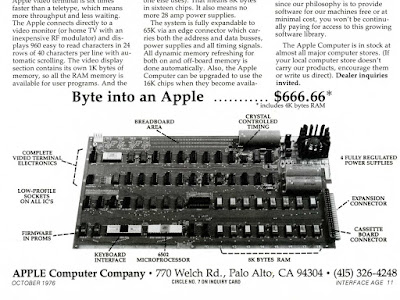 For reasons never explained, he priced his very first Apple computer (April 1976) at $666.
(Oddly, Google has its own fascination with The Beast, having designed their Chrome logo around it.)

To better understand the belly of the beast one must visit Silicon Valley, where, in 1938, the beast was reborn.
Thus, the artist Van Stein and I embark on a pilgrimage to Geek Mecca, or Gecca, for short. 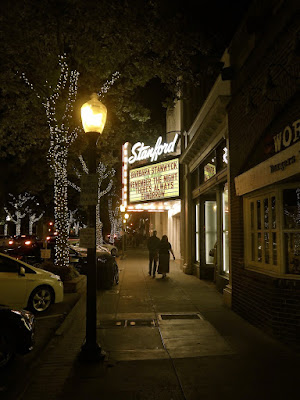 Instead, the old marquee boasts Remember the Night from 1940 and their window display features a poster of James Stewart holding Donna Reed aloft in It’s a Wonderful Life.
And that’s the uncanny thing we first uncover about this place: That the people who live here, while bringing the future to everyone else, cling to the past.
We dip into a popular bar called NOLA (devils and skeletons galore) and sip bourbon until darkness descends and it is time for us to see... The Garage.
It was here, in this nondescript garage, down a driveway at 367 Addison Avenue, that William Hewlett and David Packard gave birth to an audio oscillator... which opened the proverbial Pandora's box.

This is where we undertake an in-person Google search.
There is no main entrance, no security gate and no sign to herald Google’s presence. Instead we find an amorphous sprawl of unidentified buildings and anonymity.
“Where is everybody?” asks Van Stein.
The few persons crisscrossing between buildings don’t look old enough to have graduated college. We stop one young male wearing a Google badge and the obligatory dispatch bag.
“Where is the main building?” I ask.
He chuckles and points. “Over there?”
I try to follow his point. “Over where?”
We walk toward more unidentified buildings; all the doors are locked and signs everywhere say, Google Employees Only.
“This is better for them than guards with guns,” I say. “They just ignore visitors like us.”
Finally, we find a sign that says Visitors Center.
We enter a small drab lobby. Behind the counter sits a lone female receptionist.
“I’d like to see someone from Google,” I announce.
She regards me with a vacant expression, barely a hint of amusement in her eyes.
“I tried to phone,” I further explain. “It’s impossible to connect to a human being. I tried to email. But nobody answers. So, I’ve traveled a long way to see somebody in person.”
“We don’t do that,” she says. “There’s no one who can see you.”

(We have arrived at the entrance to Emerald City and the Great Oz is unavailable.)
“Maybe you can find a trainee junior assistant who has two minutes to spare?”
She shakes her head. “Not even. There’s no one here who can do that. You have to send an email to a support group.”
“I have already,” I say. “No one responds. What about you?”
“Me?”
“Yes. Can I talk to you?”
“No. I’m not authorized to talk to anyone.”
“But you’re talking to me right now.”
She shrugs, no longer talking. Silently, she provides handwritten instructions about who I must email.

That person’s name is Support. 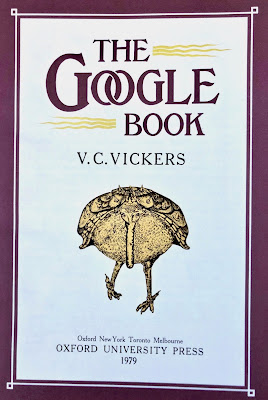 Many years before Google became the name of a search engine (and data storage facility), it was (I kid you not) an ugly beast depicted in a (foretelling) children’s book by V.V. Vickers, published by Oxford University Press.

This illustrated book is about a much-feared "Google Monster" that resides in "Google Land."
The monster does not appear until the last page and when it does it is with these words: 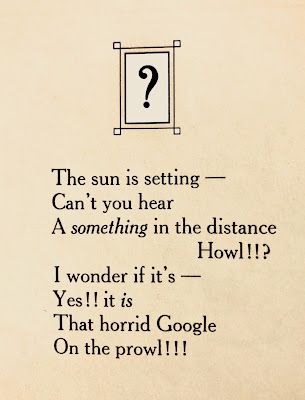 We continue our pilgrimage to Facebook headquarters, situated at Hacker Way in Menlo Park.
There is no main entrance, no security gate and no sign to herald the presence of Facebook. Instead, an amorphous sprawl of unidentified buildings and anonymity.
Van Stein invokes Yogi Berra: “It's déjà vu all over again!”
And indeed, we go through an experience identical to what happened at Google.
The faceless face of Facebook.
I discern this message:
We Zuck you in, store your data and market what you’re looking for directly to you before you even know you want it, but don’t contact us, you’re just data and we’re a data processor and it’s got nothing to do with sociability or humanity.
Mark Zuckerberg said it all when he dubbed his creation “The Trance,” which he designed to be “hypnotic.”
Today, whole teams of psychologists are employed to perpetuate mass hypnosis.
Put another way... 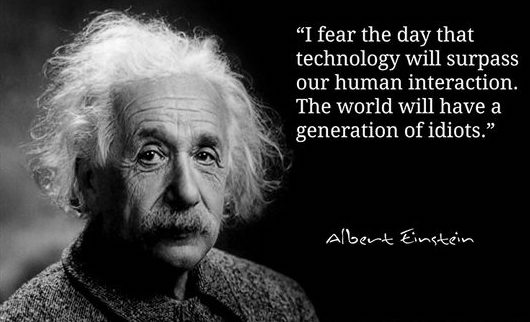 After Silicon Valley we crave someplace as different as possible and, fortunately, it is not far off: 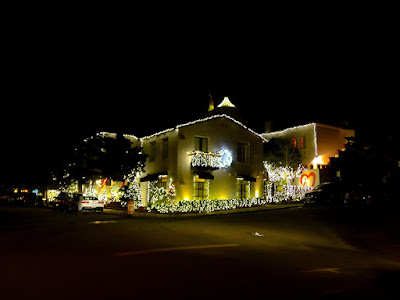 It was Ms. Day, patron saint of dogs, who pioneered the concept of a pet-friendly hotel.
Here, dogs occupy overstuffed chairs in the lobby with their pet people, who are tolerated only because, well, dogs cannot check themselves in.
Surrounded by canines I realize that dogs are the angels on this planet while humankind, largely influenced by the devil, is inadvertently replacing itself with artificial intelligence.
I’d been thinking about buying an iPad.
Instead, here in Carmel I opt for a Visconti rollerball and a Rhodia paper pad.

On World Social Media Day remember this mantra:
People matter, not the data.

Posted by Robert Eringer at 5:19 PM